It's my birthday, so let's go to Highgate Cemetery.

Not sure why, ages ago I saw advertised a tour of Highgate cemetery, the place where Karl Marx is buried. I mooted that I'd like to go one day, not expecting to either remember to ever go or for my wife to book it as a birthday treat. That's the last thing anybody would buy as a gift..... 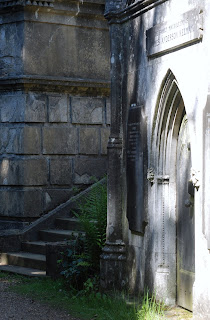 The tour started around 2pm, enough time to buy some bits in Brick Lane Bikes and a curry somewhere along the lane itself. Got my bits, yet walking along the lane we found all of the curry houses closed. I'd been looking forward to that! Ah well, we'll get something decent at Highgate. This is Islington after all.

Nope. We got there an hour before the tour and it was a wasteland in terms of places to eat. Ended up, my birthday lunch, a sarnie from Wenzels eaten in a park. You really want to be me eh?

It was OK. The lady doing the tour had clearly been taught what to say and when, yet she'd not revisited the lesson for some time. On the tour she was fine, it was only flicking through the guide later on that we realised she'd got gaps in her knowledge. We also realised that the tour wasn't because of safety fears, but because they could charge. I'm not against people charging for things, more a little disappointed they'd thought the ruse up and not been honest about it.

Actually her lack of knowledge becomes more annoying the more I think about it. She couldn't answer any questions that weren't in the script, so why have a guide at all? I found out more in five minutes from Google than 70 minutes with her. Some Australians were less impressed. She kept pointing out famous authors. "Have you read the book?" asked an Australian. No came the reply, or if she had, the book in question had been dull so she'd not read much. It's interesting snipets like that, that add to a tour don't you think? She was a nice lady, just not a fountain of knowledge.

If you are in the area anyway, the tour is fine. I'd not suggest travelling to it. The main drawback for me being no matter how famous the person, or interesting they were in life, a grave is a grave no matter how it is dressed up. I thought it was bigger than it was as well. 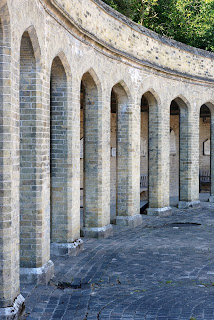 Brick Lane must be open by now! Early tea, mooch about London of an evening, late train home after a bottle of wine in a snug pub....

Nope, wife wanted to see daughter as it was the day of her first exam, so home we went. Back by 5pm.

My birthday. I'd bought a little bell, a t-shirt, eaten a sarnie and looked around a graveyard. Makes you want to move to London doesn't it?