Retro biking is always fun. The Sunn Tox from 1998

We all surf online these days. Bit bored, fire up the mobile. I generally look at the local classifieds for interesting bikes. One of my hobbies being fixing up an older bike. Why? Well firstly I just like bikes. I don't discriminate when I buy; my oldest being from 1950. That was an old Raleigh tourer bought for £20. Fixed it up, spent a month polishing it just because I liked the colour. Sold it on as really it was two sizes too big for me. Did not make a profit as I advertised it at the price I paid plus the cost of all the parts fitted. The buyer was more than happy; it shone.

Secondly the bikes chosen tend to reflect my view of a particular era or incident in my life. Hence predominantly the bikes are from the 1990's when I really started mountain biking, although I do also look at the earlier bikes. I learnt to ride on a 1930's tourer.

Thirdly because going for rides with my ten year old is a bit silly if I'm clipped in to a £4k suspension bike whilst he's on his 32lb bitsa. To even things up I always chose a bike with rim brakes and a handlebar stem that is always in the next time zone it's so long. Handlebars naturally have to be narrow and straight.

These bikes never cost more than £70, so I can afford to play and buy things on a whim. Last year one of my bikes was an old Kona. That was nice, yet it got sold to fund some new brakes on a modern build. Regretted that, and no bike since has come close to it. 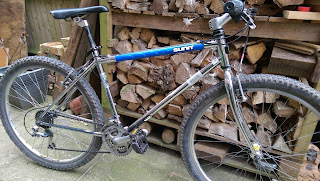 This, believe it or not, was £50. That's the price of a set of pedals in Halfords. You may scoff, and ask why I'd want to ride something so old. What a waste of money.

However, consider this:
This bike so reminds me of the Orange Clockwork C16R I bought back in 1994. It rides so beautifully and smooth - well once I'd let 30psi out of the tyres it did. Got it home, did nothing to it, popped out for a spin to test it. Jeans, t-shirt and shoes from work. 20 miles later I came home. I absolutely love this bike. Indeed so happy was I that I wrote back to the seller explaining what I'd just done and why. He was genuinely chuffed by that.

It's a keeper. All it needs is a correct left hand brake lever and it is crying out for green, skinwall Michelin wildgrippers. They are £60 a pop used though ;-(

One of my points above has been negated. My son, on one ride with me on this bike, caught up with me at a junction and asked why I was going so fast!

It was a keeper until somebody offered me £130 for it! Now it is gone.