Well, it's not actually good enough to replace the Orange or the Tassajara, even though they are old school 26". True if I want to set a fast Strava time downhill it would be the go to bike. But even then it is only marginally faster than the Orange. It's better everywhere than the Pace. However, the elephant in the room is mass. 2.8" tyres on fat rims = slow anywhere other than down. It's useless going uphill, and even along singletrack it can be a slog. Point to point my Orange is faster.

Why would you buy a modern bike? Trail centres. My Orange 5 is great for the Surrey Hills. At modern trail centres the rear end is just too noodly. I'm a rubbish rider, yet I notice. I'd never notice any flex on the Whyte - mainly as it is made from scaffold poles.

It sounds as though I don't like the 901. I do, yet somehow it is bland and one dimensional. Great if you are in the mood for a one dimensional ride! Exploring, riding for a chat or just going for a mooch, it's a right arse. It's not my go-to bike. If it lost 3lb or 4lb, essentially from the wheels, I honestly think little would touch it in terms of overall speed and fun. Downhill it is faster than me - I hold it back. It's everywhere else where the excess mass kills the fun. As for the rims, garbage.... I suspect it is set up as a learner bike, which sounds an odd thing to say, yet that's how it comes over. As if it is compensating for a lack of skills somewhere. Really I should have bought a 2017 Cotic. 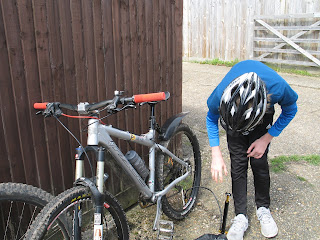 Here we are buying sausages in the sun. 5 minutes later it snowed. Easter 2019 for you.