Side return extension on a Victorian house or just update the kitchen as is? 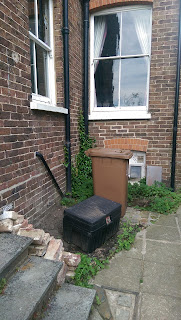 We need a new kitchen.

We do - not just want. Ours is falling apart and is 1980's useless. All odd sized cupboards and wasted voids. It has half a ceiling, and 70% of the lights have not worked for fifteen years. We originally decided just to replace like with like, and just update it. Got some kitchen people in, and really all they want to do is sell you the maximum number of units that they can, without any regard for how one may use a kitchen. And all of their units are multiples of 300mm. OK in a modern home that is itself a multiple of 300mm segments. Our kitchen needed in-fill panels to make these 300mm units fit. So again we're back at wasted space and the ugliness of in-fill panels.

To be fair, these Victorian houses were never designed around modern lifestyles. It also does not help that our kitchen is a foot below the rest of the house, and four foot above the garden. We were asking people who spend 99% of their time designing boxes, to design, say, a circle. It was never really going to work.

Got an architect in. He was really nice and I bonded with him instantly. Let's have a side return extension, fill in the void at the side of the house. Solutions either to just fill in the little void with a boring rectangle for near £60,000 or do the thing properly and do a big extension. Without the kitchen - which was the whole point of the exercise - the triangular (yes) double height glass extension would have been £200,000 as proposed. It would have been cheaper, and better, just to knock the whole house down and start again. You see we live on quite a sever slope, and there are huge height differences everywhere. We'd have ended up with a grand old house, £200k more debt, and still no kitchen.....

Of course the decision to do this took time. Three years for various reasons, not all of them our fault. We did explore a lot of ideas, and I spent ages drawing up stuff (I've a degree in Building Surveying). None ever seemed to work. One builder, bless, was honest enough to regularly pop around and diss our ideas completely. Whilst it would be easy to say he held us back, that would be both incorrect and mean spirited - he was simply telling us the truth. That spending £40k, £50k or £60k on nice looking extension things was just daft. We needed a workable solution, not just a pretty let's get it in House Beautiful stupidity.

[One issue being that we sometimes holiday in Belgium. They do building properly over there. Often we'd stop in places with glass box extensions. One house opposite once literally had a clear glass box as a sitting room in the middle of the garden. Wife, naturally, wanted a frameless glass box. We did explore the box solution. Laugh? One company came around, said yes, easy, then came back with a white, plastic framed rectangular conservatory on bricks for £60,000 that sat 5cm away from a back window and wall.]

No extension option did it for us, so dear old me got some paper and a pencil out and jolly well designed my own simple little kitchen.

Now this is easier than you think. Need a hob, oven, fridge, dishwasher, sink and places to put stuff. Once you find room for the appliances, just fill the voids with cupboards. I mean, how hard was that?

In the end I went a little mad. The door to the garden always bugged me. Narrow and stuck between units. Just along from it is a massive window. It wasn't a huge intellectual leap to decide to swop the two around. That would have given us a 'U' shaped void to fill with units. Except I decided to drop the window where the existing sink resides; and drop it right down to ground level. No more 'U' shaped kitchen then. Kind of a galley now, with a full run of units along one wall, and half the opposite one.

Again we were left with kitchen designers offering to sell us 300mm kitchen units and fill in panels. The designs looked nice, yet oddly none seemed centred around, you know, actual cooking. It seems people specify expensive kitchens these days just so that they look nice in photographs. Really, they do. I know people with three ovens and £80,000 kitchen islands, who only ever cook frozen pizza or fish fingers and beans.

Our builder cottoned on to the fact that I wanted a proper working kitchen (yes, strange though it is, I cook things from raw ingredients every day). He suggested getting one custom made.

You are having a laugh mate?

Nope. He sent us up to Naked Kitchens way up in Norfolk. That's a 170 mile drive, one way. To look at a kitchen factory. In the middle of Norfolk. Five hours it took to get there. Not because I drive slow, but because everybody in Norfolk does. You see people towing caravans, or tractor drivers, being held up by locals in Austin Allegros doing 15mph. I'm not, sadly, making this up. We were told, once we got there, that regularly it can take over an hour to do the eight miles to the next town. I digress.

At the moment it seemed like a wise decision. Naked Kitchens will custom make us a range of units out of immense quality wood, that is designed to fit the actual space. Our drawers are something like 720mm wide. Rather oddly their price was very, very close to a standard unit from Homebase or such. So close that we didn't flinch at the price. And that for units that we specified, right down to colour - blue in my case, natural in my wife's.

You see, this was always a bug bear of mine. In kitchen showrooms, the appeal lay in the colour and style variety on show. Yet the designers would always - always - try and pin us down to one colour and one style. We could never decide.

In the end my wife specified the colour and style of one side of the kitchen, and I did mine. Differently. She's gone for a wood finish, me a sleek, indigo blue. We've even gone for different work surfaces. When we told Naked what we were doing, they just said that 70% of their customers do the same thing.

It's not started yet. That's next week. I'll keep you posted.

One thing I can say is "builders!" Oh come on, how long did it take us to find one who could be actually arsed to give us a quote, let alone do the work? We'd get them around, they'd um and ah, then we'd never ever see them again. I think we'd have had a simple extension knocked up, filled with a generic kitchen, a good two years ago if even one of them had given a quote.