One of the things I have gotten involved in, which is actually quite fun in a stress free way, is commission work for Meldon House & Home in Oxted using Annie Sloan paints and waxes. When Judie gets a commission in for painting, I'm the one she calls. Mainly I do these in-house; some, though, are too big to move. In such cases I go mobile. In some lucky cases mobile means I get a bike ride in as well. This was the case this week, as the commission was local to me. 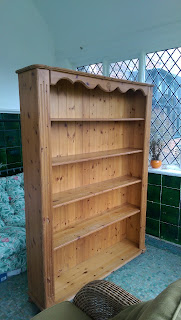 It's hard to see from the photograph, but this thing was a pig to do. For one it is almost 2 metres tall, so used a lot of paint. That was heavy to carry on the bike. Secondly the client wanted it to look like a fireplace she'd seen - which was almost white over grey. My first colour on the bookcase was thus grey, which drew negative comments - it's much nicer when the client doesn't see the process.

Thirdly some of the die in the bookcase ran through the paint, making it light brown. You can use a thick undercoat paint or knotting solution for this, none of which I had. My solution? Thick clear wax, then wet paint into this wax before it dried. Worked a treat, and shows you should trust Annie Sloan to do the job.

Yes and no. If I'd driven instead of cycling in, I'd have saved almost an hour of my time. Driving would have been the option had I another job to go to afterwards. However, this was the only job booked in, and it paid only enough to buy lunch - in reality it didn't pay at all did it? The job was more a favour than anything else.

Cycling in meant I saved on 30 minutes worth of petrol and transport emissions - a lot when a job only pays enough to buy some crisps and a coffee! It also meant almost two hours free exercise, along a cycle route I use anyway. So it was tremendously uneconomic from a business point of view, yet hugely rewarding personally. If I'm not time constrained then I'd do it again.

Oh and no. A fat bike for jobs? 4" tyres, almost 100 miles, effectively on roads? Definitely... yes! A cargo bike would have been better, as would a bike with a rack. None would have been as much fun, or allowed me that cheeky cut through over a boggy field, which shaves almost ten minutes each way.

I used the fat bike three times for the commission work, which took me East. In between jobs, I used the cycle link also to go West, almost down to Crawley. All of my cycling this week has been up and down the Surrey Cycle Link, and none of it has been for what I'd term fun; little errands to do. And do you know what? I enjoyed those rides as much as any up in the hills. They made a change to what I normally do, meaning I got to see a different part of the world at a slow pace. Surrey it turns out is amazingly old. Many of the buildings I passed were from the sixteenth century.

Digging, and filling, a hole.

Small, dirty job. Somebody has to do it.

Bit slow now, Christmas and all. One job did roll in the other day, which I'm quite excited about really. Been asked to decorate the hallway of a self defence club, the only brief being to make it look great, and use corporate colours. How fantastic is that? Instead of painting something white, white again, I get to be creative. Really looking forward to this one. Got some cool ideas..... One of which is to use Mylands emulsion. The current paint job is plain white, which as you can imagine in a fight club looks horrid. Mylands contains marble dust, which should be pretty tough going. 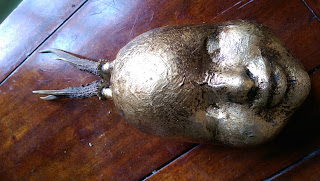