Why ride a #fatbike at all?


"Man, that's a heavy bike!" is a fairly direct and accurate observation of my fat bike. With water and a spare tube attached to the frame, it's not too shy of 40lb. 4" tyres can be hard to push along. After a few miles you feel the effort. Gosh, even getting the bike out for the day is a chore. Thule even build an XXL bike carrier for them.

Yet it is my first choice of bike each and every time. Sure I'll take my susser out on a group ride, or even my hard tails; it seems prudent not to spoil everybody else's fun through my slow, meandering progress. On my own the fat bike rules; no other bike gets a look in. 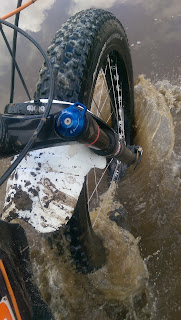 Lots of negatives there. Rather oddly these are positives for me.


On a fast group ride we'll hack like crazy.... only to stop and chat in a café for an hour or more. My last group ride involved three such stops. Alone on the fat bike I go a little slower, stop a little less. The stop may well be a pub this time. Going slower means I see more stuff. For me a lot of my riding revolves around finding things, mainly new trails. Going slightly slower gives me time to observe the world and interact with it a little more. Without this slowness I'd not have found three new, cracking downhill tracks where I live. Irony? You bet.


No doubt about it. Can't argue against that one, and to be fair I do not like it. Can live with it, it's not a deal breaker. You can get carbon this and that. Me? I've actually embraced the weight. Why fight it?


The tyres do not grip that well.


Mud. My fat tyres do not like mud. They just do not dig in, more float. It's kinda fun. There are compensations. Rutted, rocky trails? Never notice them on the monster bike. I've gone over stuff at full pelt that others walk timidly. That's not skill or balls; that's big tyres for you.


Ah, believe me you do not want either a long climb or long road section on one of these. It does not help that, thanks to a lung disease a few years back, I have reduced breathing capacity. Yet that applies when riding my other bikes as well. My fat bike sucks on long hill climbs. The added grip from the big tyres is no compensation.


Other riders shun you.


Again no big deal. I do not need constant affirmation or reassurance from other riders. I'm out there doing my thing. And here is the big positive for me, a trail finder at heart. Walkers. The average walker hates cycles. Fact. Ride a single foot off the posted trails on a mountain bike, and a walker will leap out the bushes and threaten to report you to the ranger or council.


Out on the fatty? No bother. "Look at those tyres!" A few walkers ask for goes on it. So when I'm places no bike should be, deep into private land, or along deer / dog walking paths of dubious legality, instead of the usual grumbles, these people look upon me as a small, lost child and smile. Means I can carry on finding cheeky trails for night riding, or those pesky hidden downhills that locals build for their own fun.


Fat bikes are just that. If you need to ask "why" then you'll never get it. If, however, you look at one and think it looks fun, then you get it, and you'll love it. My first introduction was at Cannock Chase, three years ago. Saw a couple pass by, and I thought that looks hard work. I bought a frame pretty much then and there.