Like most people I sell my old, unwanted or mistaken purchases through eBay. Mainly I sold mountain bikes, or cycle related stuff. On occasion a piece of furniture, always for pennies really. We bought stuff, used it or decided we didn't really like it, so sold it on at a loss. We were happy; at least some of the money came back, yet somehow also realised we were being a bit daft. Why buy in the first place?

Sometimes the things we bought needed repair. Over time I became reasonably proficient at repairing junk. Not professionally competent in terms of restoring an antique, more adequate at making good a used item. Most likely they then needed subsequently painting to mask the upcycled bits. Turns out this is something I can do quite well.

Went from selling old, junky items to selling something I'd upcycled. Still happily made a loss, yet now not so much, plus I'd learnt something. Now I can paint.

I sold some items a little time ago. Three chairs plus a chest of drawers. Total sale price? £8. That's for four items I'd repaired and painted. £8. You do the maths. Each item taking at least an hour to do.

Anyway, life's too short to grumble, so I moved on. At least they were gone.

Rainy day, bit bored, saw an advert for an interesting shop near Dorking in Surrey. Called The Emporium, drove over to have a nose around.

On my second walk around, spotted one of my chairs for sale. Then another, and another. Rooted out the owner, and only recognised her as being the lady that bought from eBay. Bit of a chat and it turns out she's desperate not only for stock, but for traders to rent space.

She wanted people to rent space, the stock was selling for reasonable, and not silly eBay prices. My chairs were £25 each, which is still cheap. Less than I paid anyway. It seemed prudent to rent space rather than try and sell through eBay, which for me is a failing model. eBay charge more and more with each year, many buyers don't bother to pay, buyers claim none delivery, and prices for a lot of stuff are in free fall. How, for example, can people charge 99p for a book with free delivery? 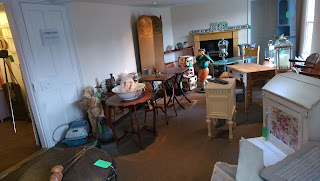 Rented the smallest space I could find, then popped home and removed three items of furniture from my house. And that's how I've started; with three bits of furniture and other oddments from home. If these sell, then I'm going to have to buy more stuff in, and do it properly. Fingers crossed that my eclectic mix works. You never know?

Quite frankly I have no idea what to do with it. How do you dress retail space? No idea; just bunged some stuff in. It's a mess, I'll have to learn. Will I make any money? Again no idea yet somehow suspect my dark blue shabby chic furniture may well be a hard sell. Luckily my wife has some genuine antiques at home that we could sell to cover the rent.

I'm guessing this, odd as it seems, is how a lot of people start. Have too much stuff at home, and that stuff is odd enough to attract a bit of interest, though only in a retail environment with other eclectics. One of my items, for example, is a one eyed Troll Skull. My furniture is dark blue, almost black.

I'm aware that that model is not sustainable; we only have so much unused furniture in our house. Now I'm going to have to learn where people reliably buy things from. From my job I've been to auctions; horrid things where it is difficult to compete with the big boys. eBay and the local papers are too tough. I'm going to have to learn to become a Picker. Seems potentially fun.

I'm also concerned as to how much shabby chic furniture the world can take. Some of it is genuinely great, and perfect for any home really. Much of it, though, is a cynical re-hash of something that should have been junked years ago. Quite frankly a second hand item of furniture, painted beige and sanded a bit, is still, well, a second hand piece of furniture isn't it? I can't see the desire in a lot of it.

Personally I think the item has to have a bit of quirkiness to it, or be beautiful in the first place, just a bit tired. A painted pine table? Doesn't do it for me. I'm rather hoping The Emporium takes things up a notch, and I get dragged with it.