24" Carrera Blast for the boy.

About two years ago I picked up a near new 24" wheel Carrera Blast for £65. These things retail for £230, so it was a great price. My boy was pleased with it, yet something was not right. He never really rode it that much. And for my part I always felt it a little heavy. Time passed, he never rode it, I never found the chance to look at it in any great detail.

Until last week, had some spare time. Figured the forks had to go, and the brakes were not too hot. Bars seemed a bit narrow. Bars I got new for £16, brakes off eBay for £14 and I had some broken rigid forks for a 26" bike in my garden. Thought I'd change the suspension forks for some rigid ones, so used the broken ones I had as a template.... Actually once I put them up against the bike, kind of thought they may well bodge.... 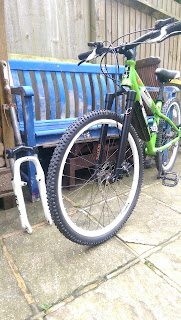 As you can see, I managed to get them in. They were broken as the previous owner had ground down the steerer tube, so a lower race could not fit. The diameter of the tube being much less than the bearing race. Figured Araldite may well help. Forks are knackered anyway, so I glued the race on. So far it has worked. This one mod saved almost 1.4kg from the bike.

The brakes are Avid BB5, which are superb. Tempted to use them on my fat bike. All the other bits, such as the grips and bar ends, were from my spares box. Once up and running the grip shift seemed useless, so that went for some thumb shifters, which needed a new rear mech.

Boy came home from school, looked at it, liked it, off to the park doing skids. Uses it quite a bit now. 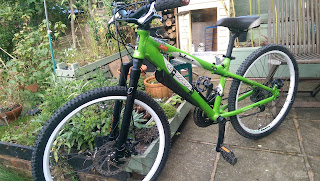 All in all this has cost me around £120, which isn't bad is it? Nice light bike with proper gears and great brakes. 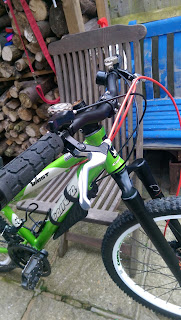