Turning my garden into an allotment; week 2, construction and tidy. Raised beds.

We had some building work done to our house a year ago, and seemed to have been left with six used pallets. Three of our neighbour's had new roofs recently; the roof tiles were delivered on pallets, that went into skips. Polite request to the builders' and they ended up in my garden. 6 or 7 per house, another 20 in the garden. Ended up quite a pile of pallets! And my builder continues to deliver used ones from other jobs. My poor suffering wife lost her decking area at the bottom of the garden.

Now for the main part I stripped the pallets down for firewood, but kept some longer, unbroken lengths. After breaking down roughly 35 pallets I ended up with more wood than I knew what to do with.

That was until I came up with the ruse of constructing raised beds; the strips of wood lend themselves to easy bed construction. Luckily this also means that my wife's decking area has re-appeared, as I've finally got to the bottom of the pile. To be frank I'm glad; I am sick to the back teeth of having looked at pallets for a full year now!

These strips are about 80cm in length, which is enough for a raised bed. Three strips make one bed. I think the photographs speak for themselves really.

Once constructed I painted them with fence black. This is horrid stuff - top tip; wear gloves.

I've not really done much else; just a general tidy. The pallet mound at the bottom of the garden has now gone! Soon the wood piles will be moved to the shady side of the fence on the left - we're reclaiming our patio for human use.

This wood store shown below will be moved soon as it eats up too much sun. The little vertical pallet will contain plants that tolerate dry conditions; hopefully it'll not look like a sodding pallet for long! [Have you any idea the tedium involved in breaking 35 pallets?] The licence plate is from my cousins motorcycle in America. He gave it to me the last time we were over there. Hopefully I'll get another as we're in the States again this year. The balls we found at Dungeness beach.

I've also used pallet [I'm even starting to dislike the word!] sections for a roof sedum garden. Looks really horrid, and I hope the plants will disguise it. Christmas rescue cat seems to like it. 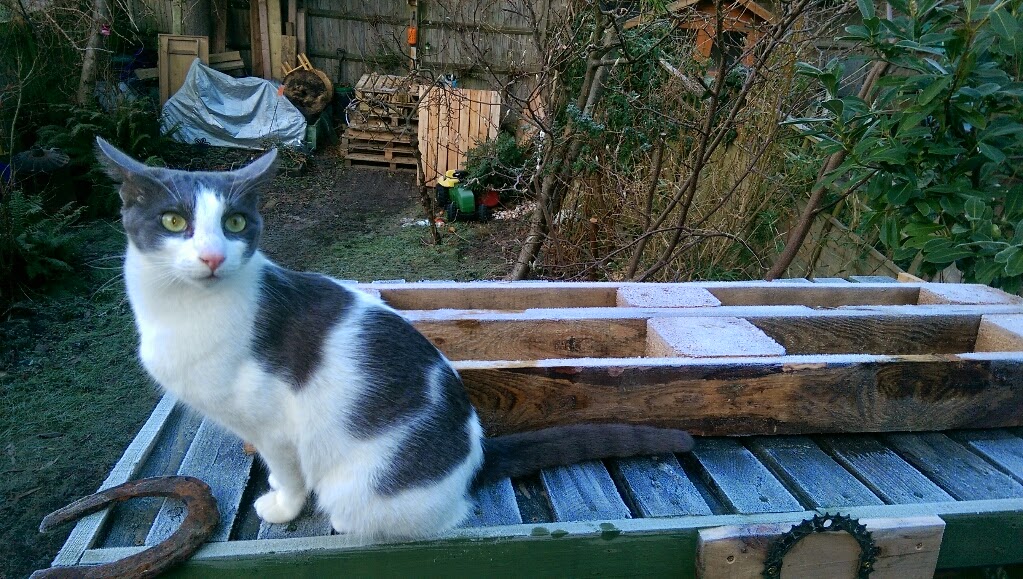 Ten years ago I made a sand pit for my daughter. Now she's older she just uses it to stand on whilst chatting to the neighbours' children, and cadging food when they eat al fresco. The local cat population have started to use it as a toilet though. Aha! Remove sand, fill with soil, plant, job done.

Again right now it looks horrid. Once the weather improves I'll paint it up. You wait until it's full of tomatoes!

I'm gradually getting through the garden, removing two years' worth of crap. It's a lot of work, even if I wasn't changing to vegetable growing duties. It needed doing though. I'm glad I did it section at a time. I'm bored of it now and if I'd tried to do it all at once, well I'd have stopped half way through the job and gone for bike rides instead. It paid me not to go too fast, too soon. I'm no gardener; I get no enjoyment out of plants it must be said.

Indeed I quite like my garden being used not just looked at. To this end I've left quite a bit of it untouched, with rotting wood in hidden areas. This isn't me being lazy; I like the idea of bug habitats feeding birds etc.. These wood piles are full of squidgy animals, and I have a little Robin friend who helps with the digging. We even have the odd frog. Our Christmas rescue cat is too stupid to catch birds; he lived in a cage for three years and is just learning that he can jump. Poor chap; when we first let him out he had no idea that his back legs could get him up things.

My next task is to move one wood store to the shady side of the garden, and to deal with the pile of remainder construction wood under the tree. Our builder's just left it; there must be 140kg. It looks ugly and has been there a year. I've no use for it, keeping it more that wood is expensive stuff to buy than for any intended purpose. I may well also cut that tree down. I planted it fifteen years ago, as a foot high thing. It's now 40ft and a monster.

Once the frost has cleared and we have some dry days, then the raised beds will go in. May well buy some seeds then. I've no intention of buying carrots, potatoes or anything else you can get for pennies at the local store; what's the point of that? Will have to see what is available that looks different to the norm.