November 10, 2014
Friday night out and about on the bike for an evening spin. Bike, the PACE RC303 was all well and good in the mud. Happy as Larry. Up near Headley there was a slight frost, which was surprising. The moon was bright and clear. Indeed so much so that for all of the ride my lights were set on low power. Being November there were fireworks about, which was nice to see. Although not on top form, I put in a speedy 90 minute effort and all felt well with the world, even though I had nagging doubts about my poor form.

Sunday morning, wet but not bad really. Bike all fine, although at the start the rear brake felt a bit off. The lever felt mushy; nothing a pump or two didn't resolve for this lazy ass cyclist. My legs, however, felt leaden and I lacked energy overall. My plan was the new cafe on Ranmore, but my legs just couldn't be arsed. Managed Box Hill and back in a big meandering loop is all.

Box Hill! What have they been doing with it and Headley Heath? They've segregated us mountain bikers and horse riders from real people via some new trails. Had to happen I guess; did seem silly at Box Hill having lairy cyclists mix with two year olds on the play trail. So I can see why the National Trust has installed a new route or two on the hill, and think it a good idea. Problem being that they've not put any hardcore or any other suitable trail material down. Just signs through a wooded section. Mud? Yup. In one puddle my front wheel went down so fast, and so deep, that the rear lifted clear off the deck. That woke me up.

Headley Heath? The new parallel trail to the old one is awful. Deep, claggy mud. The old one has been resurfaced substantially. Twenty foot wide, well drained footpath it is now. Bizarre. Couldn't find any info as to why this has been done.

My back brake gradually gave up the ghost, with the lever pulling back to the bars. Made for an interesting ride, just the front brake in all that mud. Got home, bled the system. which took all of three minutes - literally. Initially out came some black gunk that looked like mould, then some big old air bubbles. Lever all solid again. Can remember AD being charged near £50 for a bleed and pad change. Even with a pad change the job wouldn't take a bike shop more than ten minutes. Milking it?

On the subject of maintenance, I bought a used bike the other week for £20 with an "irreparable" puncture. Seller thought the bike was scrap due to a flat tyre. Thought I'd just try pumping it up first.... That only worked, so perhaps the bike shops who charge for repairs know the truth; that just perhaps some cyclists need teaching a lesson?

Back to my legs. Never did rise to the challenge. On one small hill that I normally fly up I stalled at the half way point. Not out of breath, just no energy to get to the out of breath point in the first place. Called it a day with 25 miles done. Poor show.

Oddly enough, even though my legs didn't come out to play, it really was an excellent day to be abroad. Full winter sun, no wind. It never did warm up, yet at the same time wasn't really cold. The autumnal colours are still with us, and the trails holding up well for the main part. Even though the actual cycling part of the day was poor - the reason for actually being out! - the day itself was wonderful.

One motivation thing from this. Guy at Box Hill on a Fatty. I've just gone all niche within a niche and bought one to build up. Just got the frame and some bits so far. Was going to chat to him, if I'd spotted a mountain biker among the roadies. In the end caught sight of him cycling off. Irony here being that he must have weighed 40 stone.

Any other amusing anecdotes Muddy? Three I guess.

One woman ran up to me at the cafe and pointed at my shoes laughing. How muddy are they? Going to put them in the washing machine? "No. Why would I?" Came my witty retort.

Two, the woman on Headley Heath in full waterproof gear; right down to boots and gators. She was mincing around a puddle and I thought had let me pass. So I cycled through slowly. One drop - one drop I kid you not - hit her and she recoiled in horror, screaming out. Again I had a witty retort to hand; "Sorry!"

I'm telling you, I should do a comedy tour. Sell out it would.

Third one the hole cut into the side of the bomb hole on Colley Hill. Little family gathering looking at it. I rode up, jumped it in my usual pro style to cheers from the admiring onlookers. That felt cool*.

Any other issues? Well one. PP gave me a professional level silver emergency blanket. Girt big padded thing. Designed to keep arctic soldiers alive mid-winter. It's like taking a sleeping bag out with you. Since using my last silver blanket, I felt happy with it and stuffed it into my pack. Five miles in, wet back. Hmm, overstuffed pack crushing my bladder. May well keep it for the winter as it is nice. For day-to-day rides I don't really need to take a sleeping bag out.

I didn't take any photos of note, so here are some gratuitous images taken from my recent holiday in Dungeness. 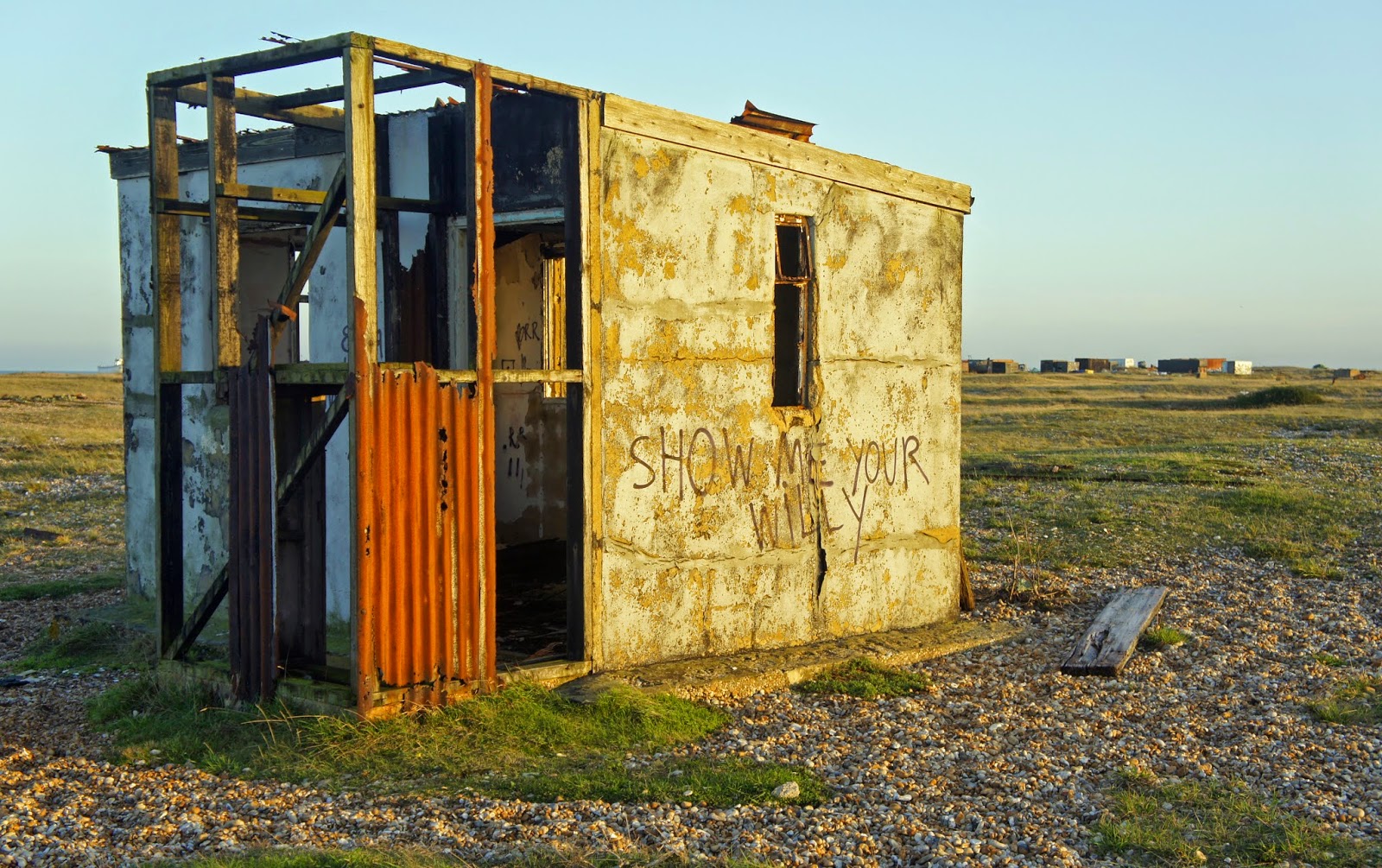 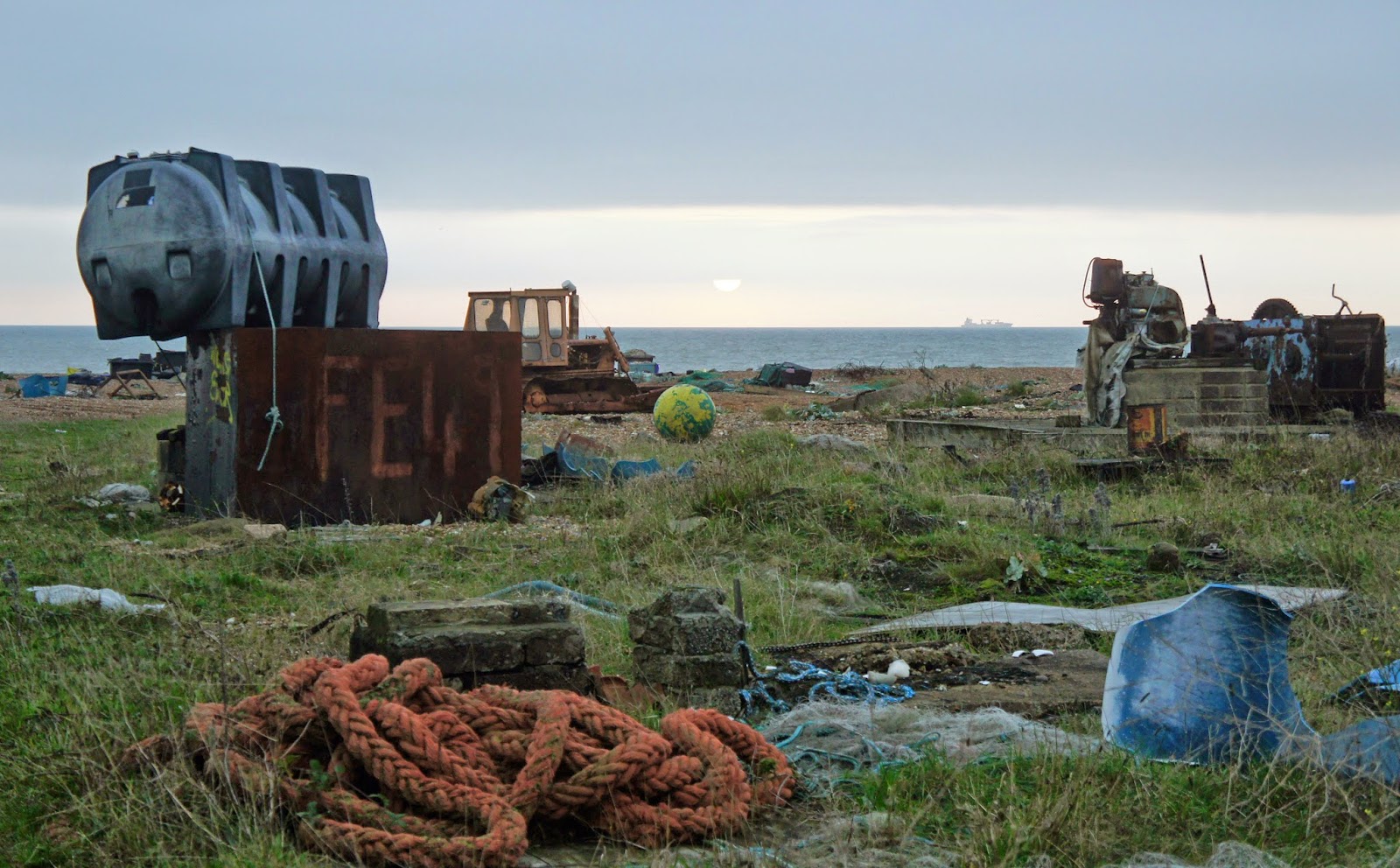 *Crashed over it gormlessly to looks of bemusement from the adults and guffors from the children. Probably dinged my rear rim into the bargain. Rode off quietly to lick my wounds.