In the spirit of doing something new with regards to cycling; Church grounds maintenance.

On Saturday I was having a quiet coffee with my daughter in Bletchingley. Drinking it, I became aware of these old boys doing grounds maintenance in the church of St Mary the Virgin. Watching them it was apparent that some were quite elderly, with one lady, bless, who could hardly walk. She was doing her bit.

Sat there watching, drinking my coffee.

Decided that we were being lazy and could put our relative youth to a better use, so I strolled over and picked up a tool and started to scrape out the moss. My daughter was less willing, yet still managed a bit. They seemed happy to have some help and new company.

I'm not religious in the slightest, so have no idea what religion the Church belongs to. We were just in the area, had nothing better to do. It was initially surprisingly hard work, once a routine got in, it all became easier.

Makes me think now I may well get involved in organised trail maintenance, rather than my usual stealth maintenance of new trails.... 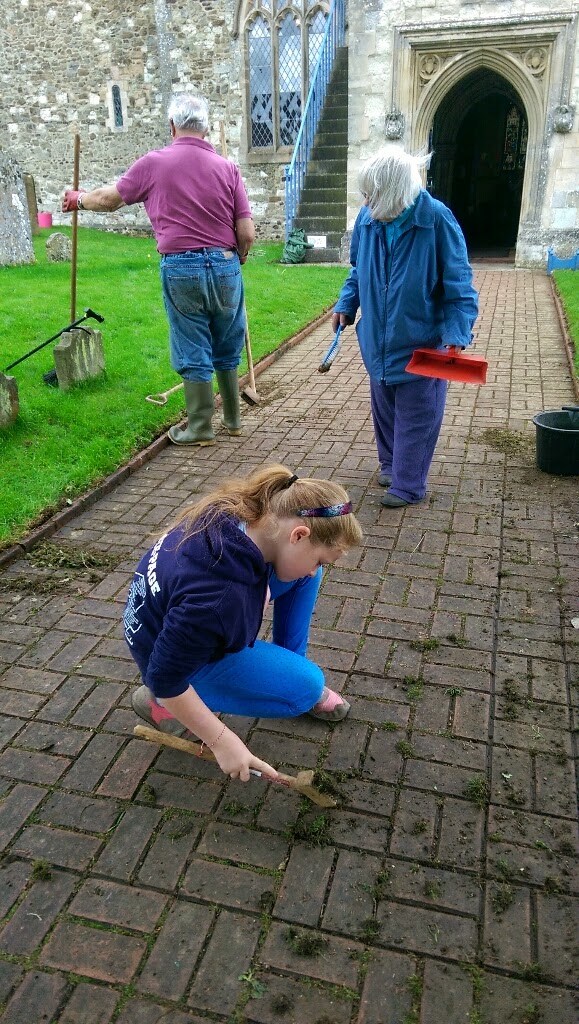 Well yes, there were a few. Charged my lights, went out Friday night. Tally was one dogger on Reigate Hill, one bat, two mice, one vole, three foxes and lots of rabbits. My was it hot out. Wore a jacket at the start, soon down to a t-shirt, even then sweaty.

Sunday morning, in the spirit of doing something new, I realised I'd not done my standard Headley Heath / Box Hill loop for months. Dropped my daughter off to sailing - not as flash as it sounds as it is subsidized to the point of being free - and set off Headley way.

Instead of being the same boring loop, it was all nice and fresh. Golf course singletrack? Lovely. Coffee at the duck pond, jodhpurs aplenty, double lovely jiggly.

Everything the same, everything new!

I have three. For the past month it has been down to two. Couldn't get short chain-ring bolts for love nor money. Well my LBS couldn't. So I've been swopping cranks out between bikes, which is easy but a bore. Gradually realised that just having two working bikes wasn't fun.

For ages I've thought it decadent to have more than one bike, and have been feeling guilty. Got to using one, the Gary Fisher Tassajara with short travel suspension. This is a fine bike, and more than capable around these parts.

Capable isn't always fun though is it? Bit like having a reliable five seater hatchback, or a slightly unreliable TVR.

So I was glad to get the chainring bolts and go back to three functional machines. Just means a bit more choice. So on Sunday I took the too-small-for-me PACE. It has a semi-slick rear tyre. It is too heavy, having an old school Pike up front. The bars are narrow.

It slipped, it slided, it generally misbehaved.

Wouldn't have had it any other way!

Bought two more bikes. One for the wife, one to sell on. The wife one was fine; £50 for a £350 bike is good by me. The second, an ancient Raleigh left out in the rain for two decades wasn't. £40, walk away. Except buying it was virtually charity for the seller. Poor as. Probably rich as, especially with mugs like me around.

Got it home, rusty as anything.

Titanium handlebar though, must be worth something. Stripped it down for the bin. What's this? After cutting the tyres off the wheels are actually quite good SLX units. Derailleurs, both SLX, both unworn. And the crank, if I can get it off, is an as new SLX too. May well get my money back on this one.

Which is why, when I spotted the half price Fatty frame.....