So, paramedic attendance aside, what's Leith Hill and Summer Lightning like on a Sunday?

Normally I avoid Leith Hill on a Sunday.

Sure it's one of the best destinations for mountain biker in Surrey, yet for me that's also a negative. Means on good days it gets rammed, especially around the choke points of the tower and Peaslake. So when I was invited on a ride around the hill yesterday, my first reaction was in the negative. Nah, not going, it'll be too busy. But as PP had blown me out, the alternative was yet another solo spin to Headley. Don't mind solo spins to Headley; it has merits. This past month, though, I seem to have done nothing but spins to Headley. Time for a change? Well why not, go along for the ride, be guided for once instead of guiding.

However, the meeting point was to be the Landslip car park at Coldharbour. Now I do hate that place. In my mind that's a car park for the lame and sick of this world - cyclists should always meet at the bottom of the hill, in Dorking, and ride up. Earn their stripes as you will. Every member of the party it turned out could have ridden up the hill, so they had no excuse.

Anyway, I left early and rode the hill. It was very pleasant indeed, and I was the only one doing it. Hmm, Leith Hill may be OK. Going up, past Squires Farm I had an off. Not a big one. Going over some innocent  looking mud the rear wheel stalled as it fell into a bit of a deeper section. As it stalled, my foot fell off the pedal and I cut my shin. Mental note to watch this section on the way down....

Anyway, we met at the top. I got there on time, the rest 25 minutes later. They may as well have ridden hadn't they?

No idea where we went, Telegraph was mentioned initially, so we must have done that. All I know is that having just ridden up the hill, we went straight back down it. It was fun and the climb back up not so bad. The group leader elected to try and ride the last steep section to the tower, so a gauntlet was thrown down to see who could clear it. I'll not say who the only person to do so was....

But it was me! The oldest of the group by a good 26 years. And I'm not one of those fit freaks who survive on wallpaper paste and mung beans. I've not led an exactly sheltered life.

Big queue at the tower. Lots, and lots of people. Where did they all come from?

Coming down the hill the leader of the day suggested the new trail by the cricket pitch. OK, go for it, what's it like. "Dunno" came the reply.

We got there and it was all 6" travel full suspension rigs with coil shocks. Really, it was. Tentatively asked again what this trail was like, yet it looked innocent enough so we set off.

None of us were hero's, none of us egged the others on, we all rode at what I thought were our own paces. We rolled the jumps, but did the initial section fine if a little slow. I'm happy with slow. It's just a bike ride. Actually I lie slightly. I was following our leader for the day when a guy on a bright orange Orange 29 flew by. Can't have that can we? Not with me on a retro 26" 5. So I chased him down, actually catching him up at the end of the first section. You have to, don't ya?

The second section starts off fine then hits a tiny bit of bombhole [image of the spot taken from Diary of a Mountain Biker]. The Big Boys were jumping this quite spectacularly, with one or two taking a side line off a tree stump. Group Leader and one other wanted to miss it out, but by this stage we'd done worse and could just roll through it. So the order from the rear, being me, was to roll slowly and avoid the jump. Even on reflection it's not a difficult section.

Except the guy in front did the jump. This was possibly his first mountain bike ride. 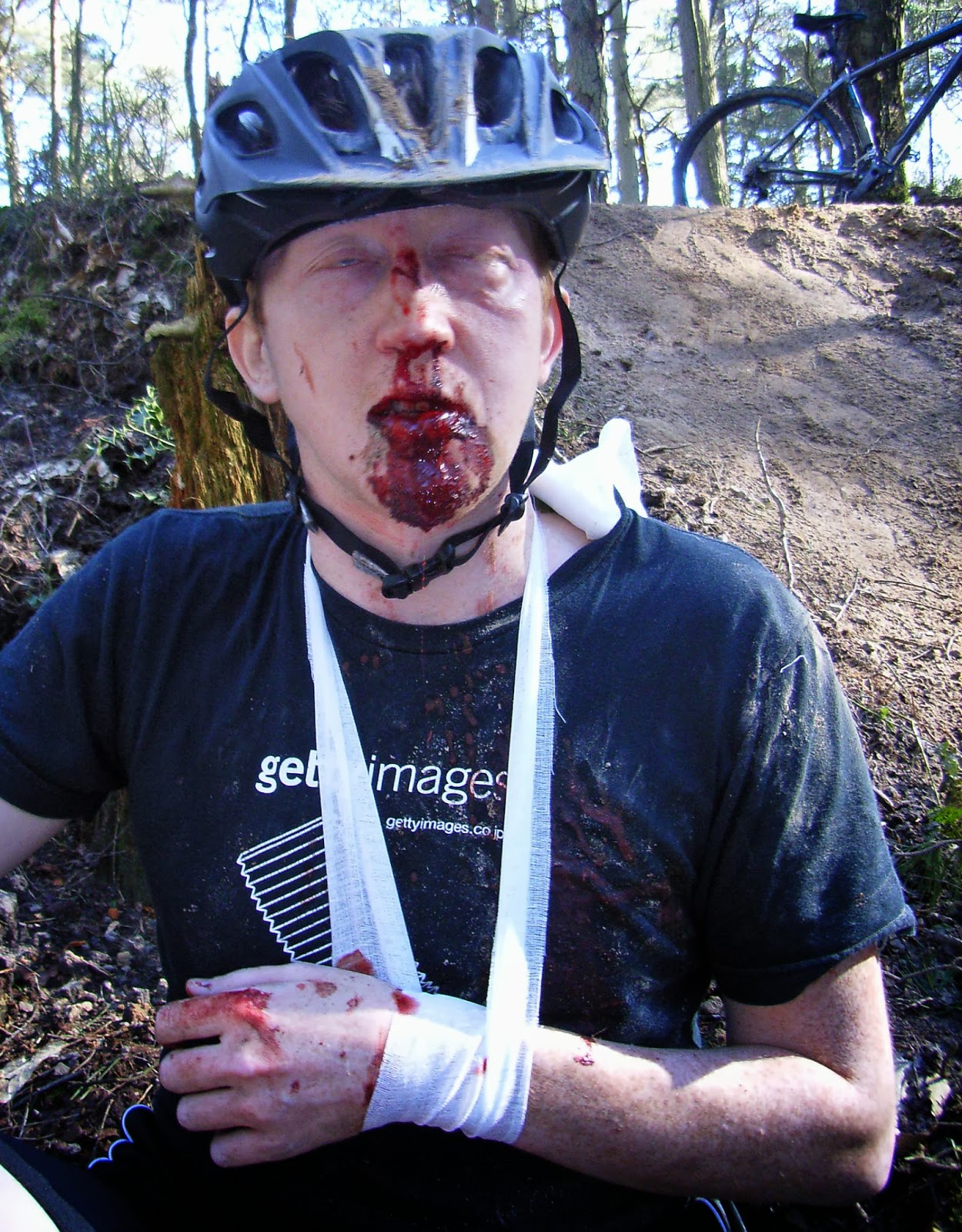 This involved two hours faffing whilst paramedics sorted him out, and he was carried off the hill. Broken nose and eye socket with bad concussion. He didn't even know his name for a time. The faffing involved me guiding four teams of paramedics up the hill. It also meant using my first aid kit and silver blanket - items I'd carried with me for 15 years unused. Bonza! Now need a new blanket as he drooled blood all over it. You can't see it here, but there was a constant stream running out of his mouth.

After giving a statement to the Police I was free to ride back to my car. Why didn't I park at the top of the hill! Bugger. By now dusk was in the air, but sight lines were good. All the way down the gulleys, rubble and mud were dispatched with ease if not finesse. From memory the run up involved a rear wheel stall near to a big gulley running down the trail, so why not keep to the left of this feature?

Ha! The why not turned out to be an innocent looking patch of gold sand that's what. Hit it at some speed, front wheel went down BEYOND THE CALIPER and I went over the bars. Can remember doing a turn in the air and looking back at my bike and analyzing what went wrong. Ended up some way away from my bike with it planted in this sand. It was like cement and in the heat of the day had already hardened all over the shop. For some time it felt like a severely buckled wheel, which hacked me off as that's a custom built one. Some judicious kicks cleared most of the sand, and apart from blood running down my leg, all was fine.

PP by the way turned up later on with his Orange 5. Now that's a trick bike. Dripping Renthal and top line Hope it's a class machine. Actually better specified than mine, the git. He wants to learn jumping. Hmm, has he not seen the above image?

So a nice ride out made all the more interesting in having paramedics join us for a spell. Perhaps Leith Hill isn't so bad after all.