No bike ride this weekend thanks to the Cargo Bike Handyman.

January 20, 2014
Up in London there's a guy who operates a handyman service from the back of a bike - http://cargobikehandyman.blogspot.co.uk/ and I see him out and about often; a flash of orange, or his bike locked up somewhere. On Friday he cycled past me in Kennington, bike looking battered and sun bleached, clearly a hard working chap.

Now pretty much every weekend I pop off on my mountain bike, into the wilds of Surrey. But to be honest of late it's all got a little boring in a way. First world problem, but the incessant mud and rain is a little tiring. Three hour ride/slog followed by over an hours cleaning and lubing? Saturday night just didn't appeal, and oddly neither did Sunday. To be fair I've not been away from the bike for well over a year now, managing to get out a minimum of twice a week since, well, it must be 2012, so must be due an holiday from all this cycling?

As an aside, looking at his bike that'd make a great tool for taking the kids to school; two on the back, job done. 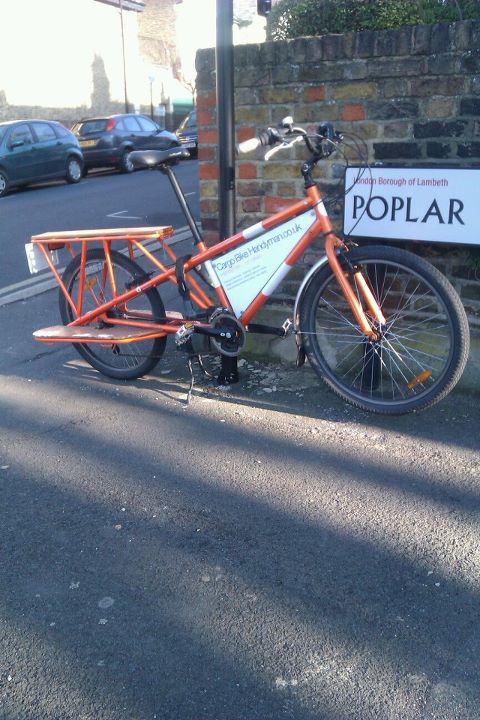 So, Sunday was inspired by the Cargo Bike Handyman. Instead of a loop to Box Hill or Caterham, I did decorating and minor repairs for twelve hours. Can't say I feel all the better for it, but it's a big chunk of work done in a room that's not been looked at for ten years. But my how expensive is paint these days? 1 litre, £22. Needed four litres, so just shy of £90 gone. Luckily the builders left a load of half used undercoat or white matt otherwise the bill would have been nearer £150. The main bugger being that ten years ago, when I originally did the room, I removed the ceiling and created a double height space right to the roof. It's a great space, and looks trick, but you try painting twelve foot up standing on 5cm wide ceiling joists. Twelve hours "work" consisted mainly of climbing up and through this void. Nice and toasty up there mind.

Hats off to those of you who went out this week, but sorry, it wasn't for me.