In Surrey we have 105 ways of describing mud.

October 27, 2013
Allegedly the Inuit people have 300 different words for 'snow' given the impact that the stuff has on their lives. Here in Surrey we have a similar situation, except in our case we don't have snow; we have mud. And today on my 25 mile spin the different types were all strongly evident. Deep tractor slush? Yup. That slippery stuff you get from leaf mulch? Loads, and loads. Deep, puddled goo left over from passing horses? How much do you want..... Apologies for the poor photograph of our mud, but this is from a childs' camera and the battery ran out before I could review it. My reasoning behind taking out my 8 year olds' camera was simple; it's worth about 50p so if it got trashed today there'd be no tears. 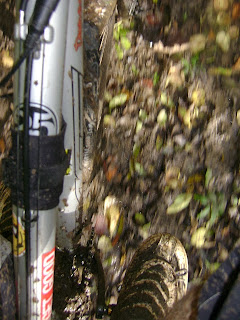 We've also got a 25 year storm brewing, so wind was in evidence quite a bit. The run back along the side of the golf course, slightly downhill, was done in the granny ring against a sheer force of nature. Yesterday I bumped into a mate of mine, and he was alarmed that I'd be out today. Got to be mad? Well if so I'm not alone in my madness as I've not seen so many off-road cyclists out for ages. Note the lack of the use of the term 'mountain biker' here. There were loads of cyclists, on pretty much every type of bike available bar fat bikes or tandems. Cycle Cross bikes, narrow tyred tourers, bikes with baskets on the front. And people of all ages. One 70 year old asked how I made getting up a slippery hill look so easy. That made me smile - either he has a skewed view of how fit he is, or I look like an ancient.

Now having said there were loads of cyclists out, for once those off-road substantially outnumbered the roadies. Saw one group of about six huddled in some trees [that was slightly bizarre to behold] but other than that they were oddly absent.

The storm had one big effect on the riders out; lights. Quite a few had rather cleverly predicted bad weather on their spin out and had acted with a simple expediency; fit a light. I put mine onto the bike but they weren't needed at all in the end. Windy, certainly, but not dark. In addition to lights I also took a saw for wet wood just in case the trails were blocked by debris. Didn't need it this time around, but in any case I was trumped by the guy using a chainsaw to clear a path near Headley. Really. A bloomin' chainsaw.

Not dark but amazingly muddy. It's rained a fair bit here in the UK, but it has been so warm that people are still out and about enjoying the countryside. The net result being churned up trails, and everybody suffered. Dogs got plastered in the stuff, walkers slipped and us cyclists got covered head to toe. Grip was absent and I had too many front end slides than were healthy for me. But being wet post ride the mud washed right off so my bike was clean again within about ten minutes.

Oh, you Dear Reader want to know about the totems on my bike? Are they still working? Well yes as once again my ride was 100% positive with no mean spirited, negative influences. Found another two today, somebodies lost gold coloured necklace pendant, and a plastic panda in a dress, which both found there way on to my bike pronto. Quite frankly it's a silly thing to do, this adding found things to my bike, and I should stop but who is it hurting, eh?

Even bumped into KD who was out with his son, and so I rode with him back the way I had just come, up Reigate Hill again. Nice to have a chat now and then isn't it? He must have his own totems as he was in an happy mood himself. In a short ten minute chat we covered all the bases; what happened to MB, how would our scaffolding cope in the wind, hill riding in general, and then on to buuying and using bikes not intended for their original purpose - his plan being to use his fixxie off-road. He was on his trusty Wiggle Kona that cost all of £500 four years ago. He's done no maintenance to that bike at all. None. All he's done is wash it down post ride with an hose, then oil the chain with multi-purpose. And by 'oil' I mean douse substantially and not wipe down. The bike takes it all no worries and makes a mockery of those of us who religiously strip and lube our steeds. But saying that this was his first outing in over two months, so his bike gets used roughly one eight the time mine does. Perhaps if he was out a bit more often his bike may look more shagged but I somehow doubt it. It does the job admirably and I am quite frankly jealous of his simple minded attitude - he has a boggo basic bike, gets out there, doesn't give a toss. Admirable attitude.

Actually thinking of maintenance, I used to be really anal concerning my chain. Wax lube for dry conditions, special oils for when wet. One drop per link, rub down the chain to get shot of any excess, chain bright and spangly. I used to try five or six different manufacturers' lubricants each year, but none were ever perfect. And out of this thirst for perfection came the realisation that if the lube actually lasts for one 25 mile ride, then what does it matter what lube I use? post ride the chain gets ripped off the bike and dumped into a bottle of degreaser anyway, so again what lube I use initially is of no concern. Plus the transmission that is on my bike now has been there for four years. It's all worn together but still works perfectly. So now any old lube does, and I'm happy using whatever lubricant falls to hand. Well apart from one thing; I no longer use wax based ones from the likes of Squirt. They just seem to find themselves in the freehub pawls, where they hold water and rust out all the little springs. My life is now so much simpler as a result. Indeed my lube of choice is now Muc-off urban for no better reason than Tesco stock the stuff and it smells nice.

The day was so nice, and the ride so pleasant that at the Headley café I didn't begrudge the £1.70 for a weak Nescafe coffee, or the £1.20 for a single, rather dry mince pie. Should really have had the bread pudding.

You want to know how the rear Maxxis Aspen is doing? Frightening, that's what but in todays' mud so was my Nobby Nic on the front. The rear would at times let go, and would cause the front to slide out as it was pulled out of line. However as mentioned the mud was such that even the front tyre washed out and squirmed its' way down the trail. Coming down Reigate Hill was interesting. Kind of guessed it would be, but sometimes the fun of the trail pushes you past the point of being sensible doesn't it? Knew full well that the middle section would be lairy, but the 30m tank slapper was fun. Well, true, it was only fun because I missed the trees as I slipped downwards.

Overall a nice little solo ride out into the rather lovely Surrey Hills. Even added to my little collection of firewood.

And RIP poor old Lou Reed, who died today. Can't remember the last time I bought an album of his, must be well over twenty years back, but all the same it's sad to hear of his passing.