Just when you thought it was safe to come out of the kitchen - even dead parents can make you miserable.

August 26, 2013
I've lived in Surrey for over twenty years now. It's a nice, positive area to live in, if sometimes a little shallow. Overall I like the area and the people. But I was in the Midland's last week, the area that I grew up in, for the first time in twenty years, and what a contrast. The Midland's is not positive, or even a particularly nice place to live, particularly where I grew up, Wolverhampton. It's all a bit desolate. But what struck me was the normality with which shitty families are accepted. My own family story seems odd here in Surrey, but at the party I was it, it all seemed normal.

There's lots of secrets in my family, nasty ones, but take that of my dad, the only family story I'll tell. I never met him, and my rather nasty mom - boy was she a bitch - used to make up stories to say where he was. Initially he'd left home because I was so horrid, but in later years this changed to him being dead as I assume that's pretty final and needs no further explanation. It's also a story promoted by my elder sister, her husband and my aunt, so why would I question it?

Now in 1989 I moved to Sutton to marry my girlfriend. One of her best friends, the godparent to our daughter, lived in Croydon. This somehow relates to my family....

You see the internet came along. When my own daughter started to ask about my family, I had no answers. So a couple of years ago I put my details into a family tree website, added my dad's name, but then got bored. They weren't interested in me, so why should I be interested in them, the fuckers. I then received a slightly stroppy e-mail asking why I'm claiming somebodies dad to be my own. Oh, turns out I've a half sister by the same father. A sister my current elder sister, husband and aunt knew all about. For forty years. Apparently they'd forgotten, the lying shits. A sister who lived pretty much next door to.... my wife's friend. We think they went to school together. Kind of put a dampener on my relationship with current sister, her husband and aunt I can tell you. But again they blame me for having the temerity to question, for having the gall to be born in the first place. They could just fess up, admit to being shits, and we'll move on in life, but people don't do they? My sister ran away to Spain to avoid all of this, whilst I front it out, holding the fort. She's not about to admit to being wrong for 50 years. One wonders what kind of family life she had, as she grew up right in the firing line where I grew up in the fallout. She's much older than me so closer to post war events and would have witnessed the family collapse, my mothers turn to alcohol and drugs. You see, I don't think I had it really hard - things had mellowed by the 1960's, when I was born. My upbringing was just uncomfortable.

Now my new half-sister clearly had to have shared my dad. Makes sense that, so he wasn't dead after all was he. Did he leave because I was horrible? Actually no. He left because my mother was horrible, but I knew that bit all along. He's dead now, as is my mother; she died years ago and was never missed, which is sad. After I left home she cleaned up her act; stopped drinking and cut out the happy pills. Anyway, when did my dad actually die?

Ha ha, you guessed it; 1989. He's buried not more than a mile from where I used to live, and I pass him every day on my way to work.

Now I'm not after a sympathy vote here, not by a long way. Shitty family that I had, we were nothing but average where I grew up. Lots of families on the council estates were a real mess. I was 16 before I found out that people like me, those without dads, could get jobs. In the Midlands jobs only went to sons of father's employed in the factories, otherwise you went on the dole straight from school. The school even taught you that, so I left at 14 with no qualifications. What was the point of going? It was only the recession that made me equal to those people with a father in a factory. Personally I think it all  had something to do with World War II and the life that mine and other peoples parents had. My mother grew up during the war, and was essentially permanently fucked up afterwards; drink and valium screwed with her head. I'm guessing that being a teenager when the country is being bombed will mess with you a tad. But she was a nasty old cow until she stopped drinking, but by then it was too late as fundamentally I didn't like her. You can't treat somebody like shit for 30 years then expect them to like you. Can you?

Funny old place, the Midlands. Screwed up families, a liking for 19p loaves of bread that contain no natural food, and an addiction to butter substitutes that also are of no nutritional value - margarine substitute is nothing but bearing grease. Yet they are always invariably relaxed, and willing to crack a joke at their own expense. They are accepting of most things. The good towns around the fringes can be superb places to live, particularly the Shropshire side. But by heck don't look too closely into family histories. 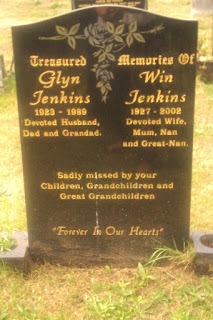