I wonder if mountain bike design has lost the plot? Are we our own worst enemies in life.

May 22, 2013
OK I'll start by defining what I mean by design. I don't mean the bells and whistles of it all; the frame diameters, materials of construction or suspension internals. I mean aesthetic design; not function but the form of a mountain bike. The very shape that the bike takes when viewed from the side.

So, what am I on about? Well mountain biking is in decline and road bikes are where it is at. My local bike shop told me the other day that they don't really do mountain bikes any more, and may as well stop. It's all road now. At the time I took umbrage at this, seeing as how I was buying a £130 bit for my mountain bike. They may as well have called me old man and started pointing at me. If this same thing would have happened in back water places like Norfolk, they'd have started throwing turnips at my head.

In owning a mountain bike in East Surrey we're outcasts, shunned by society. But not in the sense that we've adopted something new and so should be treated with suspicion. No we're pariahs because we've hung on to the old ways and have not embraced the new. It doesn't help that lots of mountain bikers call other mountain bikers who have moved over to the sport of road riding as accepting the dark side. What's that all about? 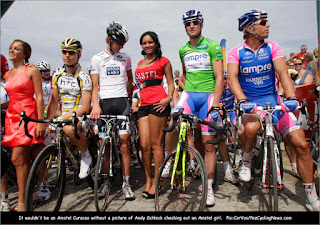 Much of this has to do with Wiggins. I accept that. It's cool to have a road bike now, it really is. But some of it must also be related to both the way we dress when out and about, in quasi military gear, but also the nature of the bikes we use. Yesterday I was on the Orange Five. It's a big, black bike that stands tall and looks odd to people not in the know. My builders dismiss it, but will coo and ah over my ancient Gary Fisher Tassajara. Really, they do. They come down off the scaffolding to have a look at it and ask about the various bits on it. It looks like a bike you'd have lusted after as a kid. It's bright red.

There you go. People like it when things look as they should, the accepted norms in life. Mountain bikes these days do not look like they should. They've got funny frames and adjustable suspension, saddles that disappear downwards. What's that all about. Who wants that at the end of a working week for a pootle along tow paths to the pub with the wife and kids? More really, as many of today's bikes don't have or can't accept mudguards. The Orange with the funny dropper seat post just looks like trouble on a wet day. Tough call trying to sell an hobby where on wet days you look as though you've soiled yourself. Or indeed one where these days you seem to need special tracks to ride the bikes on. "If I get a mountain bike I'll need to drive to a Welsh trail centre to ride it?" No, you can ride it right here, up that bridleway. "But I don't know where that goes?" Use a map. "Sat Nav?" No, map. "I'm not sure...."

Nah, I think just not being fashionable along with having adopted funny shaped bikes is a bit of a kick in the balls. We're our own worst enemies. Cammo gear and big bikes and funny lingo. Specialist trail centres in the woods. It's no wonder people think we're odd. OK I'm odd. 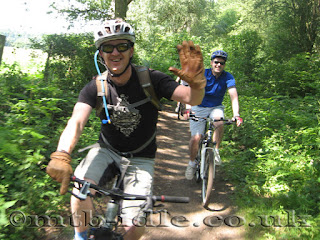 Yesterday on a spin I bumped into my children's martial arts instructor. He's something like a 5th Dan, so pretty hot and not one to be intimidated. I've known him almost five years, seeing him and his wife for four to five hours per week during my kid's lessons. They know me. Yet they reacted slightly badly to me being on the bike. Black clothes, big bike, muddy arse, sweaty face with an aggressive stance. It was uncomfortable so I rode off. I can see how we look to outsiders and it's not pleasant.

It also doesn't help our image that some custodians of the sport feel the need to ride out in big, comforting groups. Sure be sociable but where's the joy for other trail users to come up against fifteen or so riders all chasing the same STRAVA segment?

These days if I want to promote mountain biking it's best if I hide away the dropper post; that's a tough sell. As are the big days out in the mud and rain. If I want to promote my hobby, I take the red bike out. As simple as that. No cammo gear, no funny helmets with peaks, no watering tubes sprouting from my back. Red bike, bum bag and bottles of water in cages. Job done, people want to tag along.

So if you want turnips thrown at your head, take out the susser. If you want people to stop and chat, to call you mate in the street, either buy a road bike or get a mountain bike that looks like something a child would draw.