Anatonomy of a build: Loft conversion: When the steel work goes in.

May 11, 2013
Got an old house that you are intending to do a loft conversion on? Well you'll need steel for that, that and some serious woodwork upstairs. The steel [RSJ - rolled steel joint] is to add strength to the house where there is none. You can't just expect the existing walls to take the additional loadings, they need help. Similarly the existing ceiling joists, they need beefing up. Possibly not to the extent that we've gone for, but they will none the less. Hence the need for some serious steel to bridge the gaps between supporting walls, and to provide some strength to the conversion. Indeed own a Victorian house like ours and the steel provides most of the strength..... 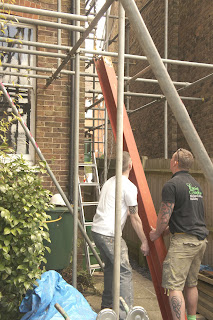 
So, the RSJ, or "steels" as builders' are wont to call them. Big. Heavy. Bastards. They take some manhandling to get in. Quite frankly when they go in, you don't want to be. Your house will shake, quite a lot. There's a lot of noise, not only the loud banging that you expect, but if you have cavity walls you get falling maisonery within the cavity. A ceiling or two may partially collapse; three of ours have. We were warned about this, so expected it. But even so, ceilings falling down? Whatever next. 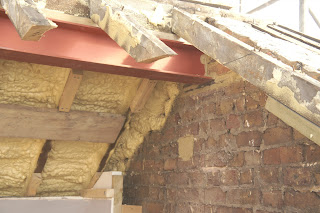 The first steel in.﻿


The bones of course is that now after having watched an alarming amount of your house go into skips [£250 each per load by the way] you at least now get to see the benefit of where your money is going. For a week you've watched the skips fill, builders get increasingly dirty, and your house get rather cold - no roof and broken ceilings does that. But then, over a few days, a shape emerges from the ruins. Your house is still trashed, and you'll be hoovering dust up until gone 10pm, but at least something positive is happening. The builders also start to get a little happier, a little more friendly. They like building after all. Here you have to have a bit of a thick skin. As like children, builders' somehow think that if they can't see you, then you can't hear them discussing you. It's funny going about house chores whilst somebody is dissing you and themselves at the same time. Oddly it means we've warmed to them a bit more. 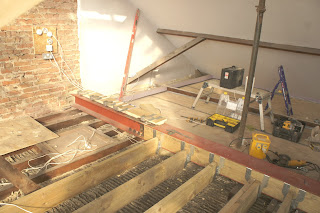