Anatonomy of a build: Loft conversion on a 1880's semi-detached house.

April 15, 2013
We've lived here, on the outskirts of Reigate, for almost a decade and a half now. In that time I got into motorbikes, then mountain bikes. My wife got into food, then children, and now keep fit. The house decided to partially burn down once, and now is in a state of gentle decay - mainly the roof, which bits of blow away every now and then. And our kids? They're just getting bigger and are starting to take over.

The house kind of needed a new roof. AD, my cycling buddy, in an outstanding example of Man Maths, suggested saving the £15,000 that a new roof would cost, instead using it to partially fund a loft conversion. Fag packet maths indicated that this would cost £30,000, so why not?

Well the why not is reality. A loft conversion, with new roof, here in leafy Surrey costs north of £70,000 if you add it all up properly and don't pretend that bathrooms come free of charge. You could do it cheaper by not replacing all of the roof, but as that was originally the point of the exercise....

I'm going to follow the build on my blog over the next four months. Mainly because that's how long it will take to do. Today is Day 1 of Week 1. Sure we've done a bit before now; pland, cleaning the thing out, etc., but today the house is officially handed over to the builder. The scaffolding is up, and Paul Smythe has kindly drawn up the plans, got it through planning, and negotiated with the builder as to price. Sure we could have done all this ourselves [for my sins I am a qualified building surveyor] but quite frankly we couldn't be arsed. 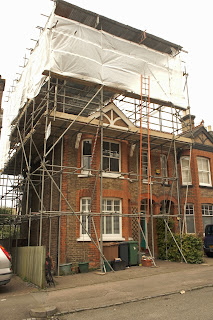 Front view showing "top hat" scaffolding. This removes our off-road parking space and infringes both our neighbours' properties. Our various bins are now on public display.
﻿ 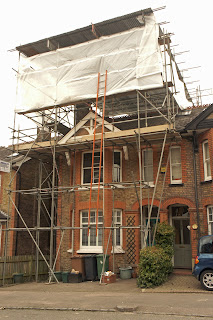 Front view with "top hat" scaffolding. The house is darker inside as a result, but lovely and cool on hot days. When the wind blows it's like being at sea in a sailing boat. At least the roof does not leak. 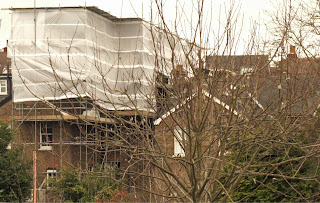 Rear view of "top hat" scaffolding. Big doesn't even describe it. Wouldn't it be great to have that as the new build? Think how much additional space we'd get.
﻿ 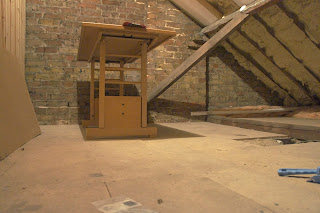 Internal view of existing loft space showing tile glue | insulation. And yes, that is a dining room table for six people. How the devil did I get it in? 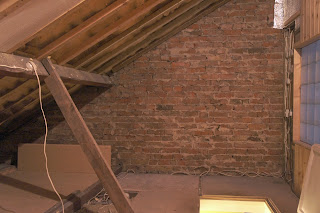 Internal view; loft space party wall showing access point. Window to right is an internal one to the main bedroom. 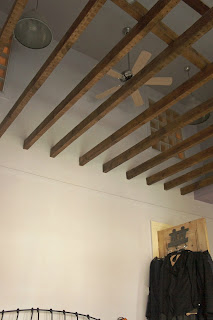 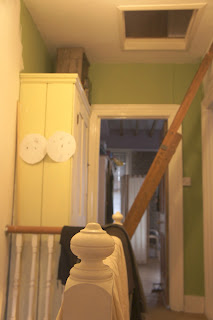 Existing loft hatch and stair well. Yes, it was | is green.
Although we are spending £70,000 to gain one additional bedroom and bathroom combo, in theory this will add an equivalent amount to the price of the house.
Anyway, our roof. It was missing one tile and this annoyed us both. Thanks to the previous owners of the house the back of the roof tiles had been glued on. This meant repairs were pretty much impossible, hence the change. However since starting the project we've noticed that our roof is actually pretty good compared to our neighbours' and they're happy with theirs. Oh well, we've started now... 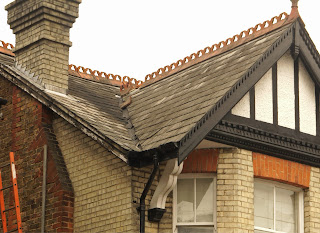 A bad roof seen yesterday.
It was also an interesting exercise cleaning the existing loft space out. To put it bluntly, we had a lot of tat. 200 music cassettes, 3,000 photographs, two bookshelves full of books, 20 1:18 scale model cars, three complete Scalextric sets, a dining room table complete with 8 chairs, a wardrobe, two folding beds, two tents, 6,000 magazines [yes, SIX THOUSAND], plus odds and sods. Some stuff we sold, some has been ferreted around the house, but nine full car loads went down the tip. That's almost 12,000 litres in volume of pure tat. In each remaining room we've probably got 4,000 litres in volume of junk. Far be it for me to say, but if we'd just had a proper spring clean we'd have 'saved' a volume equal to the new room we're getting. Life, eh?﻿