December 19, 2012
What a fine, speedy Surrey Hills ride that was! Dry, dusty trails meaning I could max it to the limit, railing around every corner leaving rooster trails in my wake. Set some HUGE! Strava times as well....

Ah. That would be a dream then Father Ted. Most of my route today was bordering on being unrideable clart. Phil's Bush was especially dire, being claggy, wet, muddy leaves that stuck everywhere. The mud in parts was around 20cm deep; a fine clay like muck that meant spinning the rear tyre up unintentionally was the order of the day. I'm not sure that any tyre would have gripped that well - what I needed was one that cleared itself, but this was not to be. I had to stop at one point as the back end clagged up [and no, I don't mean that I need more fibre in my diet thanks!] with leaves. AD would have loved it, as he is a maestro in the mud ;¬)

Now I don't normally go out mid-week but today I had little to do. Bit for work in the morning, bit for me in town Christmas shopping, finished by lunch time so off I popped before picking the kids up. Missed the Sunday ride as I had a cold brewing, and in any case I had to be in Geat Yarmouth for 9am the next morning so didn't want to be too tired before setting off on a 160 mile jaunt. As usual there were hardly any folk out. Few dog walkers who for the main were pretty decent. Well if you ignore the fact that fundamentally they are coating the UK in dog shit. I digress. Most were OK but one, who I really slowed down for and gave wide berth, gave me a look that said "DIE NOW SCUM!" which seemed a bit odd so I gave her a cheery "Whoah there nutter!" back, which always helps the biker / dog shit placer relationships. 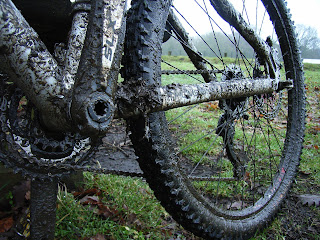 
So now I've got to spend an hour in the cold washing my bike down. Of late I've not bothered, just oil the chain, put it away. Seems pointless cleaning it only to be out in the mire a few days later. But today I had a mud sculpture that looked vaguely bike shaped so pity, it needs a clean. Kind of hate taking a clean bike out as I look like a Mamil being let out off the leash for a few hours of a Sunday. Now saying this I used to enjoy cleaning my bike in time for the next adventure. I'd clean the spokes even, then apply polish, perhaps apply a new North Norfolk radio sticker with pride. This last year has seen the end to that. S'ok cleaning something to go out when it's dry next time, but the past 8 months have simply not been like that. I'm not depressed by the weather, just facing up to the reality that at times it is just a waste of effort cleaning the darned thing. [Note: whilst cleaning my bike it started to rain heavily. Now, almost 24 hours later it is still raining and the news is talking flood warnings. Joy.]

Putting my bike away I had cause to look at the tyres as in parts they were green. Turns out this colouration was due to latex escaping from a large number of eighth inch holes in the tyres - or for my American readers, tires. Actually thanks to tubeless tech they were ex-holes, now being filled with little plugs. Never even noticed; guess they got punctured along Phil's Bush but the thick mud actually helped in the sealing process. It's great when it works this tubeless thing, but by heck changing tyres is a misery.

But more to the point I've come up with a simple little bike t-shirt based on my favoured location of Box Hill. Only problem being it looks suspiciously like an existing Nurburgring design. Wonder if I can get away with it? Possibly not given my day job......  I'll switch it to a more retro French circuit theme with overtones of the Nurburgring design. That'll fox 'em.

Going off tangent a little, have you Dear Reader been to the Nurburgring recently? Well I have and can report back that it is a mess. What's with the theme park? Kind of detracts as to why you are there. We spent hours in the thing with the kids, and by the time we'd done that couldn't be arsed with anything else. Not only that but the huge ticket fee didn't include a track pass either as it turned out. Got a free ticket to go back to the theme park, which we didn't use and says volumes about the place - why give free tickets away if it is any good? I'd always wanted to go but it was a disappointment. The area looked lovely though, and if it is anything like Spa-Francorchamps should be good mountain biking country. We did have a pootle around the village and the excitement of racing is in the air somehow. There was nothing on but you could just tell mayhem was brewing somewhere. I liked the town a lot but the theme park no. I understand they may have gone bust, spending a billion Euros to generate penny income. Do hope the circuit survives as it is a great place.