It's Tuesday and I'm about to do Barry Knows Best for the first time.

July 10, 2012
Yes, you've read that correctly - I'm out on my bike, it's only Tuesday and having lived here for 21 years I'm finally doing Barry Knows Best. On Maxxis Aspens. In the wet. Hero or Ding Bat?

You don't do Holmbury in the wet on semi-slick tyres that's for sure. Well not unless you want to slip a lot. I slipped a lot.

Wife was supposed to be working from home today. Home being my territory on Tuesdays and Wednesdays, but I capitulated and said she could have the PC all day - I'll go out. In the end she went in to work, but sod it; DiY or out for a play? So I hitched the bike to the car - faff central - and off I went to Westcott for a spin. I'd got some local ride out of MBUK and figured on giving it a go. However the pitfalls of not having a proper map, plus said map in any case residing in my backpack, meant I made the ride up anyway using my internal Sat Nav. It kind of worked, and I found quite a few of the more famous trails - the only two I know the names of being Telegraph and BKB though.

I got happily lost, found some interesting trails, gave my Muddy Ground flyer to Pedal and Spoke, and had some cheese straws. Fell off once or twice, did some steep trails and looked back thinking "how the hell did I get down that!" more than was good for me, and did that big drop on Telegraph as though I've been doing it all my life.

That big drop. It's not huge, perhaps 2 foot high. But if I think about these things, I fail and fall off. But this time, having been out for almost four hours by then with only a ten minute stop, I was so tired I just thought "sod it!" - if I fall off, I fall off. Well, to be honest I'd kind of forgotten where it was, so I hit it at speed and had no choice but to do it. Normally I go "Oh, a drop, I'll do that easy. Just brake a little though. BRAAAAAKE! Stop, fall off, walk away in shame" style of ride I have. This time I felt the rear wheel track the bigger bits whilst the front was fully lofted. Landed smooth as, didn't even catch my nads on the saddle. I even did a big "Whoop, Whoop!" as you do when solo in the woods. Indeed now four hours afterwards I'm still made up.

Gnar! We're like that we are, buddies. Even afterwards I found a few more drops just for the hell of it - I did make sure they were small ones though, just in case.

Oh and I had my first cheese straws from the Peaslake Village Stores. Good they are. Actually I fell in love with Peaslake bus shelter a bit. It kept me dry, and the village notices pleased me.

Now I enjoyed my ride, really did. But each time I ride the Leith Hill area I come away thinking that the North Downs Way around Reigate is actually quite good and not at all second best. Sure it isn't Gnar and is a bit tame. Yet Leith et al is all riding in and under rhododendrons and/or trees. You get no view. I like my views. Also by heck is it gritty around there. My chain is trashed and my pads look half worn now even though they were new on two weeks ago. I've had mountain bikes for twenty years now, and yet today was the first time my wife moved one out of sight - or smell as it stank of weedy decay. I've also got a blister on one hand; you are either going up, or down and holding on to the bars for dear life. And there's no real respite from the Gnar if you will. That's great fun, but riding is more than it all being in your face all the time. You need thinking time associated with steady pedal strokes. Or I do.

It reminded me of Transformers 3. Great fun for a few hours, but then it gets too much, too in your face and you switch off and want to go do something else. But by heck do those whinging Northern gits who slag the South off as being easy need to give it a go. I'm knackered - more so than when riding the big mountains in Wales. Think it's easy? Give it a go!

Actually the ride reminded me of my Thirimont rides in the Ardennes, except there the soil is slate based. Very similar experiences, very similar forestry managed trails, very similar bike trashing abilities and potential for hurt. Except in Belgium you ride alone. Even on a wet Tuesday there were quite a few people out on bikes here in Surrey.

And yes, it did rain the whole time I was there. Joy.

Ooops, forgot. Caught some young whipper-snappers getting it on in the woods. Ten seconds later I'd have seen some naked breast flesh, pity - he was about to lift her top and pop a boob out when I came by. Bugger, she looked fit as well. Actually when you've been married twenty years any old tart looks fit, no matter how ancient, so do take this with a pinch of salt. She was probably minging. 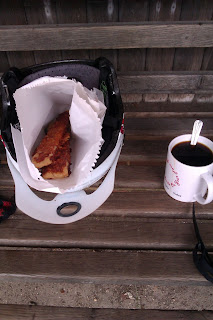 My rather healthy lunch. In a bus shelter. Live the life!
Apropos of nothing I hear you, Dear Reader, ask how I'm getting on with my Urge Endur-O-Matic helmet and did my waterproofing endeavours work out at all? Thank's for asking. The helmet I like, a lot. It's comfy and not that hot. The vents are a bit of a pain in the rain, being huge, but that's a minor squibble. It shows my age, but I am that old so can't hide that. My waterproofing? Well it rained all day but due to all the climbing I did I was too hot to bother with anything other than a t-shirt.﻿
﻿