It's official - the United Kingdom will have no more summers.

July 11, 2012
Well that's that then isn't it? For ten months' of the year I have Bontrager Mud-X's fitted, then switch to Maxxis Aspens for the summer season. Now according to research I may as well stick with the Bontys. The UK saw the last of the good summers seven years ago; from now on it's going to be wet all summer, and for every single summer so long as you live. Why? Well it would seem that the Arctic sea ice is melting and this is releasing a lot of cold into the environment. Cold which is pushing the warmer weather south for the summer. It's got to be true as our central heating came on this morning. July and the central heating comes on at 17 degrees C.

You may think that I'm making light of a serious situation; that greenhouse warming is far more important an issue than my having to change tyres. Well you're wrong. The Bontys' are tubeless, see? Exactly! Anybody who has tried to fit tubeless tyres to a bike would fully understand my grief. Fitting tubeless involves making up a whole host of new swear words, the kids being removed from the area, and the neighbours' curtains twitching.

So thank's to just a few years' worth of excessive consumerism, the Northern hemisphere is, in a word lifted directly from the Metrology Office web site, fecked. The jet stream will always be south of Watford, and your disc pads will never last more than a month. Just remember that the next time you buy something.

Bye bye summer, it was nice knowing you. 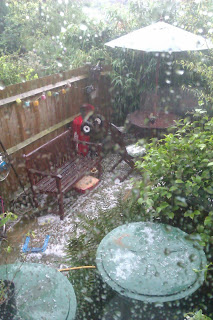 This was storm number six in Redhill yesterday. I got to nine and stopped counting. Bizarre day. I'd be in the garden, t-shirt and shorts, bright sunshine and not a cloud in the sky. Yet behind my house are the North Downs, a chalk escarpment perhaps 350m high at most around here. This runs West to East across the UK and often the weather will track this landscape feature. I could stand in the sun and watch an approaching storm. It would hit, we'd get an inch or so of hail for twenty minutes, some power outages, and away it would go. The results were horrific really. Localised flooding, traffic gridlock and some road upheaval where the ground water pressure was just too much for the road to take. People had given up trying to remain dry.

And kid you not, the local water company lifted the hose pipe ban this week.