Two go to Ashtead in search of coffee and cake.

June 17, 2012
There's a new cafe in town and I felt duty bound to visit Bike Beans Cafe in Ashtead. However, as the name suggests it is in Ashtead, and a bit off the beaten path for us Reigate cyclists. Ashtead is served well by bridleways running through Epsom but it's a dog leg journey of a few miles really, and, well in terms of gnar or challenging routes there aren't any. Put simply you'd have to want to go to Ashtead and whilst the cafe is a nice enough place, it's in too urban a location for me to make the effort on a Sunday morning. Bocketts, Box Hill and Headley all offer the same but a more rural setting. I wish them luck and feel they offer a lot to the South London cyclist. Having said this Nonna's in Coulsdon offers more and the Ashtead lot could do well to take a leaf out of their book food wise. For me the coffee in Bike Beans was a little small and watery, and the muffin was dry. AD wasn't fussed to have anything at all. Prices were good for the South. They're a friendly bunch though, and the Panny Farthing a great advertising tool. Looking on the web, lots of cyclists use it, so it must be OK but it's not for me. Good luck with it! 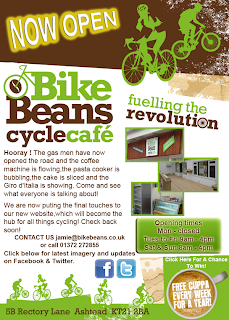 Obviously today's ride centred on going to Ashtead, which didn't impress AD one bit. Fair play, it's in the wrong direction for a decent spin, especially as he'd brought his susser out to play, bless, and involves a little too much road for me. However we did make a decent fist of it in an XC sense, gathering a fair bit of speed through the golf course and then back over Epsom Downs. The golf course I led for once and feeling aggressive hit it hard, dropping AD back. My attack was a little unexpected and being the older party I think he felt it to be short lasting, but I was "in the Zander zone" so couldn't slow up. I strongly suspect a lot of drool was involved in my effort, and it wasn't pleasant. Pretty much maxed out my heart rate along there and it felt good, although my legs we shaking at the end. Sometimes you just have to let rip and go for it. AD isn't at all keen on the fast, open drop onto the race course itself as it leads to.... the race course, his least favourite place to ride in the known Universe, so we instead cut up and over to Headley.

Now normally cutting around Headley and down to Stane Street involves some really fast bridleways but this week's rain plus horses meant we slogged along some sections in the granny ring. Some bits were dire, just being 100m of claggy mud. This was a real disappointment and fuelled AD's "Muddy's chosen another shit route" mindset, and who can blame him? It was shit is week, heading over to Bike Beans, but you can't do the same week in, week out now can you? But in one sense I feel that AD isn't on top of his cycling game of late so needs the challenge of getting stuff out of newer ventures. His zenith being Leith hill so I'll just have to give in one week and drag us over there. It's not far, 8 miles or so away, but when you've the North Downs a ten minute cycle away anyway it seems pointless loading up to go somewhere so near. Guess the flip side is that it is so near, then why not make the effort more often!

The route may have been poor, and the turn around point at Ashtead urban, but in the end we both got quite a bit out of today. My pushing early on set the tone and it felt like our average speed was up by 2mph throughout. It pays to let the aggression through every so often. My PACE RC303 felt good today, and on the ball for once. Sure the gears were still off at the start but were easily fettled. I'd mistakenly left the fork on a slow compression setting and it seems that this may be what the Pike's really wanted.

Oops, I'm even boring myself now! Who on earth gives a fig what my suspension is set at?

It is unusual for us to have any purpose to our rides; they're just chatty 3 hour rambles normally. So AD wanted to be back for 12, I wanted to visit a new cafe. Fitting both in concentrated our minds towards actually riding bikes fast for once. It was good. Perhaps we should provide our rides with foci in future? With the trails drying out my Aspen tyres worked very well. What mud there was wasn't an issue and I ploughed on happily. My bike is a touch heavy now, carrying everything but my food and house keys. I'm happy with that. The bike has to carry my lard so why not a few tools as well? It doesn't care as long as she's out on a spin. Gladly the Hope service cured all ails and it was silent, and the new V8 pedals were lovely. Still want a Slackline though..... It would improve my life and cycling not one jot, but want is a want no matter how you cut it.

The Brighton run was on today and we got the sense of it on the trails. It may as well been mid-week such was the amount of riders out and about. Indeed mid-week there would be more. On the trail we saw nobody. Big fat zero. Walkers and horse riders not counting of course. This may have fuelled the additional speed as there was little chance of having to stop for other cyclists. AD did slightly overlook it on one corner, running wide after a bush encounter, but otherwise all was plain sailing. Makes a change for me not to fall off, but then this week I felt made for cycling and it wasn't in my karma to do so.

Poor destinational choice and no cake for AD [who really didn't take to Bike Beans at all], it was a cracking spin out and I really enjoyed it. AD must have been in a mellow frame of mind as not only did he come out early, but he avoided temptation in not commenting on my eccentrically attired bike and self. I may look like a newbie who's been screwed by a bike salesman but I don't care - no Camelbak rocks! Really I like the pack I have but the temptation to take just that one more item results in 6kg pack weight. Do I really need to take waterproofs, warm clothing, a space blanket and emergency medical gear on each and every ride? Obviously not as the case has shown to be. Money, inner tube, keys and Jaffa cakes it is then whilst the weather holds.