My Klein Mantra in the Belgium Ardennes.

March 07, 2012
Another old report, this one back from 2009. But as I've ditched the rose tinted glasses regarding retro rides, perhaps it's time to look back upon a time when the Klein Mantra was not a retro bike, but my daily ride..... I can remember this ride well; 90% of it would still be fine for the Mantra but there were some very rough bits that would do a modern bike proud. The area is well worth a visit, and is certainly different to the usual Welsh trip.

[Note to self: that Magura Julie front brake is the one I now have fitted to the PACE RC303, my daily ride of late - the reason being that it is better than the 2011 Shimano SLX. If you can aford Magura, go for it.]

30/08/09: Well, where do I start? Been away on a 2 week riding holiday in Belgium; the Ardennes bit. The house we rented in Petit Haloux [near La Roche-en-Ardennen] turned out to be on one of the posted mountain bike routes they have there, so it was ideal for moi. As I was unpacking the car and assembling my bike, a steady stream of cyclists rode by. Top stuff! In 14 days I managed to fit in 13 rides of about 15 miles duration. I'll not say that the riding was better than the UK, as it wasn't by a long stretch, but the differences made it interesting and not a little worrying at times.

Why was it not as good? The Belgiums seem to look at mountain biking as they do any other activity in life; to be undertaken in earnest with fun a secondary consideration. The rides can be long, use a lot of roads, yet at the same time completely ignore the literally millions of acres of forest in the area. So no singletrack then. My wife wanted me to do the race in Houffalize, but I pointed out that the 50km ride was for 9 year olds; the men did the 100km or 125km variants - so you can see that they are into endurance type rides [note that 15,000 cyclists entered though!!]. So the rides are long, use a lot of roads, and if there is a hill in the way, go straight up or down it. However, one can always be creative and use a map to generate ones own ride? Yes? Er, that's what I did and each and every time I came a cropper big style.

1. I went out at dusk one night. The house we were on was on top of a 400m hill and the day was still very light. I rode off for 10km essentially downhill, turned around and back into the forest. It was pitch black and I had no idea where I was. I fitted lights the next day, and ended up using them 3 times afterwards just in the forests even though it was perfectly light outside.

2. One off-piste ride went along a ridge then down a gentle slope.... that gradually sloped more and more until it was just about walkable but certainly not rideable. For 200m at night in the dark. On one side was a virtually sheer drop into a small river.

3. After 12 days I came into the forest from a different direction and noticed some signs featuring men with guns. I worked out that it was legal for men to be out at night shooting things in the woods. At that stage I was wearing full UK camo gear..... Soon changed to an orange top. And yes, I did meet some hunters and no they were not best pleased to see or hear me clattering away down the trail. I saw 14 deer that night, all running in front of me! I bet the hunters didn't see any. 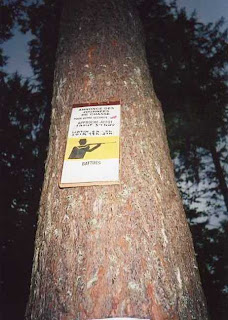 4. Off-piste took me down a just rideable run deep into a valley. The ride down took less than 6 minutes. The walk back out took me over an hour. Oh and at the bottom I had to cross one of those rickety Indiana-Jones style wooden bridges. One slat actually broke on me. Mind, the stream was only 2" deep, so not that big a deal....

5. The trails may be made of mulched rock about the size of your fist. On one ride one incident left me with 14 punctures after I'd hit a section at 25mph. I had 12 patches with me. Another hours walk home - in the woods surrounded by hunters.

Don't get me wrong, I really enjoyed the riding. But you have to adopt a different mindset. Embrace the quiet roads, the fireroad climbs and the points where you have to walk and you are rewarded with some stunning views, excellent beer and strong legs. They have some big hills there. I go back every year now, so must be keen [more so as I am from a Welsh background, having lived near Betwys-y-Coed for ten years]. The areas that the Belgiums can ride, bearing in mind they get 3 months of sheer cold, with a proceeding 4 months of hunting activity, means that they've adopted a different style of bike and ride than we have. Having to carry your bike negates against full suspension, as does the primarily ancient road or drover based trails. Full suspension bikes are getting more popular, and so the trails may change, but for now a 100mm hardtail more than suffices - especially with some fast summer tyres on. Personally the trail centres in Wales offer a better ride, but Belgium offers a different experience. If you are a freerider, then don't bother going but if you enjoy cross country and are fit, then give it a go - you'll not be disappointed with the Ardennes at all. 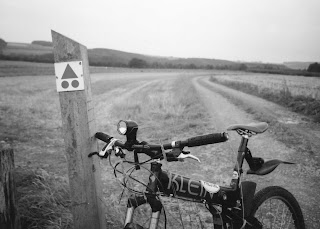 And yes, that is an old Vistalite VL400 - turned it on after 9 years, and it still worked! OK for emergencies like I found myself in, but a tad limited otherwise. The sign "4" on the post is the marked route, and this is an essentially random post on the trail. If you had decided to do the route in the opposite direction, then soon you'll miss one of these little buggers and end up lost, even with a map. Sometimes these little signs may be placed high up on trees. You have been warned!

The Belgiums also seem adicted to a paste called Speculoos that you put on toast [or pasta as the label suggests]. It is essentially those little coffee biscuits you get, but ground up in an oil. We tried it for 2 weeks - wife liked it, I thought it OK. Europe as a whole is also fundamentally expensive; a bit like shopping in Waitrose all the time.


www.muddyground.com for all your t-shirt needs.﻿