It's all a bit old man should know better - Splatalot's Ballista. 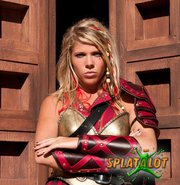 My kid's watch a Canadian program called Splatalot. I watch it too, but in an "old man that should know better" kind of way. Oh yes? Ballista...... You really have to watch the program to get the why. Then you'll see that the producer's have gone for a Romanesque St Trinian's look to the whole thing, one would assume to grip a bigger audience, hence more sales of the program. It works for me. The program itself isn't that bad, but I'm not sure who it is designed for as my kid's aren't into it at all. I have to force them to watch it ;¬)

I think she's called Samantha Brown in real life - actually I know she's called that 'cause I Googled her, except without the G. Seems I'm not the only one that 'would' either.