October 02, 2011
Firstly what a stunning day to be out; not too hot, no clouds in the sky and dry trails. Superb! Now where to go as no riding partner at all today. I did fancy a trip over to Godstone to explore a wood that the Redhill Cycling Club head for, but I've a cold so didn't fancy a long spin out. But neither did I fancy a trip over the North Downs as I knew the Comets cycle group would be out, and I didn't really fancy bumping into that bunch. In the end I decided that I'd rather potentially bump into the Comets than do a two hour ride in the full sun over to Godstone, so the Downs it was. It was a good choice as the trails are in excellent condition, and the trees provided welcome shade.

As mentioned I have a cold; sore throat, wibbly legs, temperature, so a short ride was the order of the day. In essence to stop within a few miles away in case I ran out of energy. Furthermore I didn't fancy one of thos boring "there and back" rides. You know the ones; follow the North Downs way out, turn around, then follow it back. Now for some time I've been trying to find the fabled Northwest Passage - a kind of flattened circle around Banstead Heath that avoids grassland. There ae so many good trails in the area that I find the grassy bits a bit of a chore. It has proven elusive but with staycations now being popular more pathways seem to have been forged through and over the Heath, so I was able to put a route together that did indeed avoid grass. It also avoided being a nice, flowing piece of singletrack! Work needed, but I'm getting there. As mentioned in an earlier post, I think it's slightly wrong for people to post routes on the web, so I'm not going to describe where this one is. Actually thinking about it seeing as I followed my nose even I don't know where it is. Actually thinking about it even more.... given that for much of the time I was threading my bike between tree gaps narrower than my handlebars and under branches lower than my top tube, quite possibly there are very few people who would want to know where it is anyway!

Didn't see too many people out at all. One group of cyclists already mentioned, a few stragglers and one horse. There were a few people flying planes on the updrafts over the Downs, but other than that very quiet. Oh there was a group of DofE people. Rather pleasantly the leader had placed herself outside the only cafe and was happily informing all of the walkers that they'd fail the test if they bought food there. Hmmmm, not nice.

And yes I did do the chalk path - dafault pathway off the hill now. I still screw it up at the corner due simply to the bumps as they almost throw me off the bike, but I'm not as slow of old. Practice there me thinks.

Post ride I took a look at my bike. The headset has been a problem for ages; it keeps coming lose. So I've finally taken the plunge and removed the overly large 203mm rotor and swopped in a 180mm jobbie. I've never had any need for the larger one; but it came with the Magura brake originally and I've just been too lazy to change it. It'll be interesting to see what it's like out and about; you never know, but now that I've gotten past the inertia of change I may well go the whole hog down to a 160mm.

I've also invented the patented Maxle Retaining Device. I lost one over on Leith Hill and it cost £40 to replace, which hurt. Since then I've noticed a sub-text in the magazines also talking about lost Maxles, so it must be common. Hence my invention. 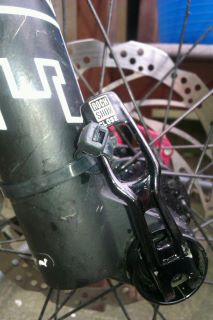 The enduro? I was supposed to be in Wales at Coed y Brenin but wife wanted to look at property yesterday, and I've had this cold all week. In all honesty though the thought of spending 14 hours on the motorway this weekend, just for one five hour slog, didn't fill me with joy. I'm disappointed that I didn't do it in one way, but to have tried would have been the wrong thing to do. It would also have been a touch expensive. Almost 600 miles driving, food and accommodation for one night wouldn't have left me much change from £160. Yes, yes poor excuses!