April 24, 2011
I've got 5 mountain bikes. That's not a brag; I started 21 years ago and have never sold a bike. The average age of my bikes is 7, and the newest one is 2007 vintage. I live in Retro Land. All of my bikes together are probably worth less than £2,000. That's the starting point for a half decent full suspension bike today, so my collection isn't that impressive a deal really. However, what it does do is cause some consternation here at Muddy Towers; which bike to take? The nutter Pace, my ancient Orange Clockwork, the speedy Tassajara or the stink-bug Klein? [The 5th bike we don't talk about as it is the bastard 40lb+ child of the family.]

For some reason I weighed my bikes today. The Tassajara came in at an impressive 25lb, so that's the one I took. I'm so shallow.

I'm on plastering duties this p.m. so Route 21 to Caterham it was. 20km with a few hills thrown in for good measure. Now the Tassajara is fast. I've built it in a Euro Racer style; flat and narrow carbon bars, 10cm too long a frame for me, Fox 90mm travel forks, hard as nails saddle. It takes some miles to get used to the flat out position. My normal average pace is 12km/h. On the Tassajara this lifts to 18km/h. 50% faster in other words, a substantial difference and it feels it. Sure I lose out on the more rugged bits, but surprisingly my top speed was only 2km/h slower than on the Pace RC303. You just have to hang on and pray. The 20km took me an hour'ish to do - road speeds off-road. Going up Gravelly Hill I'm normally granny ring, second cog down on the back. On the Tassajara it was middle ring, fourth cog down. Although a hard bike to like, the speed is addictive. 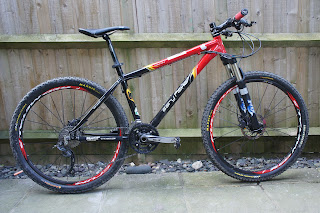 A Gary Fisher Tassajara seen yesterday.
Interestingly I saw more mountain bikers out on this supposedly quiet route than I do on the North Downs Way, a popular route. Even bumped into my neighbour, bless, who's getting fit through mountain biking. Fair play, he's now starting on the hills so he's good to go pretty soon.

Another thing to note. Normally the views of London from the tops are utterly fantastic; you can see right to Alexander Palace on a clear day. Today, however, you could not see even to Coulsdon such was the smog. Indeed looking back to Redhill there was no view past the town centre. Boy do I live in a shitty part of the world for air quality. May as well move to Mumbai. 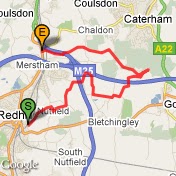 And my plastering? Took 3 hours to do the hallway ceiling, but it's done now. The heat got to the plaster, and it dried out fast in my mixing bucket [wife's washing basket...]. But oddly it stayed wet on the ceiling so I had to wait around to apply the second coat. Been meaning to do it for 11 years now. Who says that I'm slow at these things? Motivated me, motivated.