April 17, 2011
Not the best ever. Woke up with a temperature, so not 100%. Wife went for a run this morning, and did a 10k so got back late. By the time she got back Hamilton was all over Vettel so I just had to watch the last twenty laps. Glad I did in a way as it was a cracking race; well done Hamilton! Anyway, left around 10:20 in poor form. Didn't really go anywhere; Headley Heath and back.

Not very interesting is it?

Bike even played up. No idea what; chain was dry, had a slack gear cable, plus new pedals so all were noisy. But there's an underlying metallic grinding noise that I can't pin down. Sounds like a spoke is bust, but couldn't find anything. Naturally with a Pace one is always on the alert for metallic creaking sounds.... Oh and I did find a suspicious wiggly line in the frame when I got back. Looks like a production mark in the tubing, some kind of datum point for the seatpost, but I've highlighted the ends with permanent marker and will watch it with trepedation. Would be a funny point for a stress crack as my Thomson seat tube should support it. 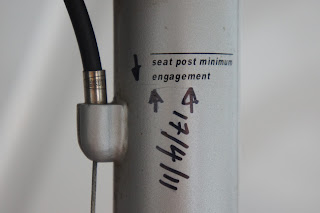 Although I was alone, and didn't really go anywhere, the ride wasn't actually a bad one. Nice fast trails and the Maxxis Aspen tyres I fitted the other day only slipped on the off-camber bits of Secret Singletrack over at Headley. My speeds weren't high - 5km/h down on last week with a maximum of 48km/h. Hmm, perhaps a susser is actually faster than a hardtail? Either that or I was riding like a wee girlie.

Had a coffee and cake at Headley. Sorry ladies, would you mind stopping your engaging personal conversation to serve me? Thanks. Honestly, why people like that cafe is beyond me. Anyway being Lone Rider today I listened in on a conversation. One guy was giving it large as to how good a rider he was, and how many bikes he's been through. Now I am a bit of a bike snob, but that aside this guy seemed a prick. I looked at his ride and it was something Halfords would reject as being cheap and nasty. No idea what it was, but it looked like some generic £200, 18kg susser from the Far East made of scaffolding poles. No way would a good rider have a ride like that. It was amusing to listen to his gash conversation.

Now compare him with the two men that turned up on full suss bikes; a Lapierre and a Gohost - both £3k bikes. They just rode in, had a brew, chatted quietly and rode off. No bullshit just riding. That's my style; just do it and don't brag.

How that theory of life fits in with a crappy blog I have no idea!