April 16, 2011
I've got five mountain bikes; two I bought complete but three I built ground up from the frame. Having "been there, got the t-shirt" I can tell you, Dear Reader, that just going out and buying a frame, then collecting the rest of the bits as you go, is the most expensive way of getting into mountain biking there is. You end up paying top dollar for everything. £300 wheelsets? Check. £500 transmission? Check. £400 forks? Check. Quite quickly you've hit £1,000 for a bike that can be bought used for perhaps £250.

Actually I lie a little. The first bike costs very little as you eBay the thing to hell and back. Used everything, right down to the cables. It's the second bike that costs the money as you do the "I'll treat myself this time around" thing and splash out a bit more. Instead of used bits you buy new. The second bike costs a fortune to put together. My Tassajara was my second ground up build and cost me around a grand to do; that's for a used 2006 frame when the new 2009 model retailed for £750 max before discounting came in. OK my bike is 1.5kg lighter than stock, but that's still a bit of cash to plop on a used bike that has little intrinsic value.

By the third bike you've got it sussed. The Pace I bought as a discounted frame. Bought new-old-stock in 2009 for half the 2006 list price. I got the forks off eBay for a third of the new price. The transmission I mixed between new-old-stock, new and used. Shifters do not need to be new, but the cranks and cassette do for instance. The wheelset I bought new, but the tyres I had lying around; that saved £70 in a way. The bike still cost me around £1,400 to build this way, but that's for a machine that would retail at around £2,000.

But even then it is only worth around £600 as a fully built rig. 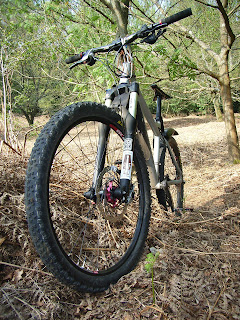 Much better to use what you already have. Wheels for instance; using older ones saves £300 on the build. Forks, transmission, etc. can all be swopped over from an old bike. If I was doing the exercise again I'd buy the bike I wanted as a complete unit, but used from one of the forum's or eBay. That way you are out riding at cost price and can swop out bits as need be. And swopping out means that you can sell the used bits on, so clawing back some of the cash outlay. For instance many used forks, if they've been looked after, hold good value as a stand alone component, whereas being part of a complete bike there is little value in them. Effectively you get the forks thrown in free with the bike.

I'll explain. My Pace frame retails at £600 new. You can buy bikes built around this frame for £600 used. Sure you'll not always know their history, and they may be past their prime looks wise, but it's a bit of a no brainer economy wise; whole bike or frame alone at the same price point?

I've used the Pace as an example, but the same is true of most bikes. Orange, Kona etc. - often you can get decent, lightly used bikes for the price of a new frame alone.

Alternatively, if you do fancy a new Ragley, Cotic or On-One [and who doesn't?] the cost of building the bike up can be mitigated through swopping over bits from your old bike, or, and this is key, in buying a complete used bike and swopping bits out from that. if you buy a £400 Ragley frame, a set of forks to do it justice can set you back £700 alone. Add in some good Hope wheels at £300, SLX transmission at £500, you're at £1,900 just on those few bits alone. You'll still need handlebars, a sadle, pedals, seatpost, cables, brakes and rotors..... Call it another £500.

Of course in looking at used you have to have cash up front. And this is the problem for many. Most of us older bikers are asset rich, cash poor. I have a house with virtually no mortgage. I should be rich, yet all of my money goes towards finishing that darn mortgage off. £600 to me is a bit of a wedge to find, especially if wife is looking on. So for most the easy option is just to go for a £1,000 ride to work shonker special or good old low rate finance; £99 down, £99 per month for three years and it is yours.

But building a bike up from bits is so much more rewarding. And oddly feminine... My Tassajara has matching USE carbon bits, and the Pace is colour matched to the frame stickers; black components with red highlights. A bit fey, but so rewarding at the same time. And the build never finishes; there's a bit of me in that bike. It's personal. I like to spend time with it and think about any changes I may make to it.

Oh and building a bike up from bits means the thing gets hammered from day one. None of this "I don't want to use it in the mud just yet" stupidity. My bike is personal, but it's built for one purpose only; to get hammered.

The only negative, for me, is the subject of tyres. Why? Well they are so boring yet fundamental to the build that you give them some thought. Now have you tried to buy tyres lately? There must be hundreds of different variations on the theme of being black and 26" round. Tubeless, tubeless ready or none tubless? Muddy, intermediate or lightly treaded? Grippy or fast rolling? Same manufacturer front and rear or mix and match? Wide on the front, narrow on the rear? I spent hours pondering on the various merits of hundreds of different tyres, and believe me it is boring as hell yet you can't walk away from it.

IT'S MY NEW BIKE - I WANT THE BEST TYRES AND DO NOT WANT TO MAKE A MISTAKE!!

In the end I went for my favourite Maxxis Aspen rear and any old Maxxis on the front! I tore the rear Aspen on the first outing....

Go on people; build a bike up from bits. There's no reason not to. Just watch what you buy new, and take a look at what you already have. That bike you've not used in a year; strip it down, move on!