January 18, 2011
Here's a link to some of the routes I do in and around the North Downs area known as the Surrey Hills. They're all based on routes from Reigate Hill car park [home of the Urban Kitchen cafe]. Most are 3 hour specials, but the Reigate to Guildford one is a 4 hour trip for the fit.

Note this also includes some details of rides I did in 2010 in Waimes over in Belgium. Most people think me odd to go there, but the area really is stunning - come on! You've seen Spa on the F1 tv coverage? That's Waimes! The local tourist information centre does a lovely map showing all the mountain bike routes in the area. But be warned; it always seems to be hunting season in the Ardennen so be careful in the woods at night. And the hills can be fairly severe when climbing them - 600m or so. But the rewards are downhill sections like this one shown below. Here I tried to get a view of what the trail was like, so I held the camera horizontally. Initially I found this singletrack a little daunting, as the trail head is oblique and onto a large tree root. But after three or four goes I was going down here at full speed wondering what was for dinner later on! The Belgiums, naturally enough, do this section as an uphill run and come down the fireroad. Er, what gives there then? 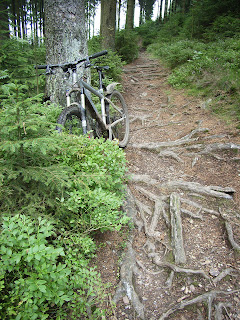