Whyte 900 series bikes with the TRP Slate T4 brakes. Why??

Had my bike for roughly three months now, and the rear brake pads have gone. Odd, as there is loads of life left in the fronts. Had a look, and it turns out the caliper was put in at an angle, so the one pad has worn to nubbin at the rear, with almost a complete depth of material at the front. Oh well, change them. But when I looked at the caliper, it's obvious TRP never actually considered the fact that owners may one day need to, you know, adjust these things. I mean, how exactly are you supposed to get go this bolt?? 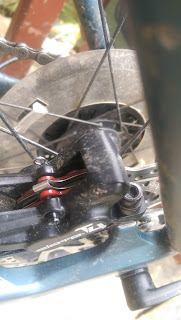 I've even struggled to get a photo that doesn't look as though I am being deliberately obtuse. Grrrrrr.

I did manage to get to it, at an angle where one day the bolt will die. Not happy with this design at all.