I just do not like it. Used it a few times, and each time my liking it declines from an initial it's ok, to what's the point! To me it's a very odd thing, and I think the "kudos" grates. Why do some users feel obliged to record every activity they do, and others to give kudos to the most mundane events. "Walked around the block today." Kudos! "Cycled to the park." Kudos! To my mind it is a form of on-line bullying, where some "in" users are given congratulations for conforming to a set of rules, and others ignored if they stray from the path of acceptance. I don't like the site at all, so I've de-activated my account. I'm not at all sure it is healthy being occupied, or chasing, kudos from other people.

Note that in life I do not like praise at all. If somebody compliments me, I think them strange. I know I did good, or bad; I don't need anybody to tell me. So the kudos thing always seemed odd and superfluous. The data in Strava tells you anyway; that's the point. Talking of which, that also annoyed me.... I go for a ride, then come back and look through some data? Am I an accountant or, God forbid, an economist? No.


Personally when I put a bike computer on the handlebars, and specifically go out to do Strava, a lot of the pleasure of a ride is lost. Take the little trail above. With Strava going I'd hack along at a pace, trying to beat an utterly pointless time. Turn it off, and at times I still hack along. But there are times when I'm pootling, and spot little bits of colour or a new cafe / pub. I'm not into flowers, or nature at all really, yet these things caught my eye. Why are they here? Same as the poppy below. I'm guessing people are either throwing seeds out as they walk, or these places were once gardens. These are not wild flowers after all. 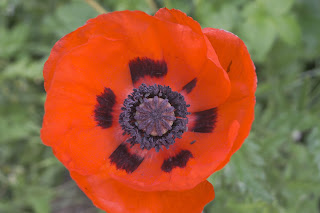 I'm pleased with the poppy image. It was taken using a lens that is only worth £5 at most. Bought from a local charity shop attached to an old 35mm film camera. I did look in one of the camera magazines today, the intention being to buy something new. It advised getting a very basic starter camera at £600, or £1,200 if you were a bit more serious. They may be right, yet I carry my camera out on bike rides - really do not want to invest huge amounts in something that will get broken. It's not like I try and sell images, mine are just for my blog that is read by a select group of 5 or 6 people. I don't let everyone read this you know.....

Not hacking about generally means observing the world around you. Why, for instance, are the woods now full of make shift shelters? Every single wood now has a shelter, rope swing or fire pit. In fairness this particular one would not offer much protection for anybody. 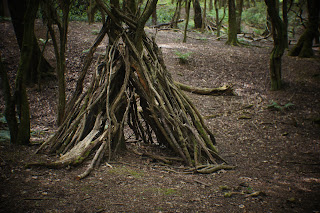 This week I fitted the little bell I got from Brick Lane Bikes. My life is like that, full of excitement. Kudos! Used it today and got ignored each and every time. One walker, after the third ring, said it sounded like a dog whistle. Can't win can you?


The bike itself is running fine. Still grates that it cannot take a rear mudguard, and that fitting a back light is a pain. And why is the bottle cage so far down? It's a right stretch to get to, as I have to reach right down to the bottom bracket. I'm still not at all convinced that modern bikes are actually that good. Sure point it down something, and it is brilliant. Best bike I own for that. Want to use it as a bike, and travel somewhere? Best keep below 25 miles then, eh? Those tyres, no matter what people say, are tough on the legs once you get to around 20 miles. And the solid rear end is tough on my rear end. Not a comfy ride at all. Very single purpose machine. OK I'm sounding old, but there was a time when a bike had to do everything not just one thing. Sure, go back to the 1990's and they were generally useless at most things. I'm talking about run-out 26" bikes, with less than 70 degree head angles, or even early 650b or 29" machines.

I think once bikes went 650b, then mutated to trail centre specific designs, they lost a bit more than they gained. My old Gary Fisher Tassajara, if I put a dropper on, would pull away from the Whyte if miles were involved. Perhaps I just bought the wrong bike for what I do. Most likely I did.


To be fair, at the end of a ride, facing the speedy descent that is the chalk path, the Whyte does shine. It's got more ability than me. Put me at the top of this trail, and get me to chose from my 1995 Orange Clockwork, or the Whyte. I'd soon shut up moaning then.

One last thing; jumps. This week I've been doing the odd jump now and then. Sometimes they look graceful, and I land like a Ninja. Mostly I land in a clattery mess, barely getting away with it hoping against hope that nobody saw me. Skillz bro! Anyway, one thing I have noticed is that 54 year old knees don't like jumps.....

By "jump" I mean a less than graceful arc to heights of 5" or less. Some of you out there may not actually recognise them as being jumps. Indeed if you were to watch me, from the side it would look like a bike glued to the ground whilst my head went vertically upwards for a nano second, followed closely by my feet and legs going in nine different directions. A little bit of wee may come out.