And now we talk ticks in Banstead. 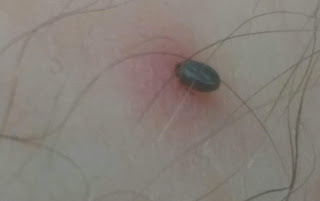 Yup, a famous Surrey tick. I know exactly where I got it; somewhere in Kingswood as the bridleways have not been cut back. Had a few of these things now, all locally. This is the first that has managed to feed on me. Annoying! It's left a little scab and red mark. Bought a tick removal tool ages ago, expecting never to use it. Seem to use it every few months, so well worth buying one and keeping it in your wallet. That or never go out?

He's not a keen rider at all. Reluctant may cover his enthusiasm levels. Pity really, as he's one of the better riders I've been out with. He doesn't really break sweat going up the hills, and even cleaned the Pyramid climb on Headley. If you are local, then you know that's good going. He's a little reckless going downhill - 34mph today, much to the amusement of two aged walkers. Actually fear would be more appropriate, as stopping the bike isn't a skill he's mastered yet. One thing he is, is a gob shite. 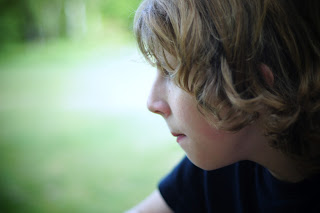 Still, at least my aged PACE RC303 is still getting used. Oddly enough, out of my collection of 26" bikes, that's the one I no longer like riding even though it has been my main bike for 13 years. It feels small. I took the 901 out today, and it was boringly fine - apart from the rear wheel trying to escape. 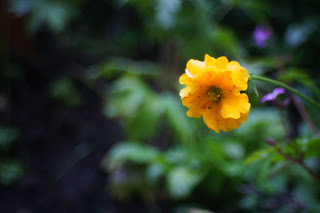 Continuing my theme of playing with cameras on a ride, this image was taken with an old Cosina 50mm lens that I picked up in a charity shop for ten pounds - and that included the excellent 35mm film camera as well. Bargain. Here I attached it to an old mirror-less camera using a cheap adaptor. No idea what the flower is; a yellow one?