I've been after a new bike for ages. All of my bikes are 26" so perhaps it is time to move on. My criteria were simple; 65 degree head angle, 11 speed Shimano, 2.6" max tyre width, and definitely not a Whyte! Everybody rides a Whyte. Oh and no way from Finch & Sons.

Brexit messed it all up. Since around Christmas nobody has had anything interesting in; the new Saracen Mantra is not available full stop. None of my local bike shops had anything in. A week ago it was sunny, and we decided to have a walk into Reigate for coffee. Passed Finch, popped in. New Whyte 901 in medium hanging up. £1,450 with pedals - which matched exactly the money I'd saved up.

Finch then said that's the last medium they can get until May. 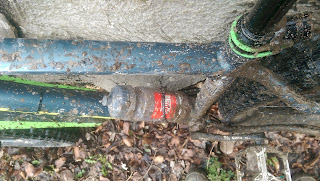 Going along is dull too. It's just not that comfortable a bike.

Point it downhill, or find a wiggly trail to attack.... and my Strava times drop. Not by much, but enough to notice. The bike becomes nimble all of a sudden, and the HUGE wheel mass means stability.

My rides since the initial 25 mile one have been better. I'm probably avoiding long slog rides out. And I must say, that 2.8" Maxxis is awesome in the mud. I'm not entirely sure why people slag it off. The bike was also easy to set up tubeless - indeed the whole process was a dream. I've been using tubeless since it was invented; so have done the full pain - some rim/tyre combos took a full two days of hate and anger to get going. This bike? Actually easier to set up than using an inner tube. Tyre off, inner tube out. New valve in, tyre on, pump up with a hand pump. Job done. Two weeks later and they are still up.

To my mind it's like a Caterham 7. I've always wanted one of those, and have done the odd track day - which made me want one even more. Started to save up for one. Wife found that Caterham hire them out, so we took one for a spin. Bloody awful thing. 230bhp, loud side exit exhausts and from the lights you had to slip the clutch at 2,500rpm to get going smoothly. Smooth roads were fun, yet we don't have smooth roads in the UK - ours mirror Aleppo. Had it hired for a full day - took it back six hours later. On pot holed roads it felt like the world was ending; the side exit exhausts made traffic lights embarrassing; it was so low down that you cannot actually overtake anything as you have no sight lines; and sadly it never felt that fast - I used to ride motorbikes, and expected more from it.

My wife has always wanted a Smart car. One day she took the family Ford Focus in to a dealer, and came out with a two seater Smart. Stupid cow! Pointless car. Until I drove it. Big inside, nip into cycle sized gaps, and it is just fun.

26" bikes are like the Smart car; ridiculed for what they are, yet they do a simple job admirably in a functional and fun way. My 901 is not a Smart car; it's a Caterham 7. Great in some areas, slightly useless in lots of others. You'd not tour on it, yet I have on some of my 26" bikes. No way could I imagine doing 100 mile days on this thing.

Nope. It's by far and away the best £1,450 I've spent on a bike. It's slow going up. That's OK, so am I these days, and I get exercise induced asthma anyway if I go too fast on cold days. Lots of weight on my wrists going on long, level trails? Take a different bike then! Or it may just be that 30 years working in an office has left me a bit weak. The answer is to man up. Indeed when I stop whining to myself, the tired shoulder aspect kind of goes away.

Bit of speed, point it down something.... Quite honestly I'd not want to be on a different bike. Put a bit of effort in, instead of being passive, and the 901 is something else entirely. You cannot dawdle on this bike. If you do it's too harsh a ride, too boring. Wake up, turn the dial up to 10 and it is perhaps the best hardtail ever. Not even my Orange 5 is as fast.

The 901 is just full on all the time. It's the high maintenance girlfriend who you'd never marry. If you get a chance to have a play on one, take it by the scruff of the neck and hammer down something vertical. It's a bloody wonder.

It's still overweight for what it is though.