I've had a Garmin 200 for years. Used to use it for Strava until I got the hump with that - eBikes and Crossbikes setting all the fast times! OK I only have one fast time on there, and I'm old now so unlikely to set any others.... https://www.strava.com/activities/350102438 and do you know how I set the fast time? More, why it now sucks? Well firstly it is a segment I made up after setting a good time, as you do. Local route to a few people. Secondly about a year after setting it, the National Trust put a fence in at the end.... Oh and thirdly my fast time involved an inelegant, and violent end that meant a trip to casualty for concussion and a crushed left shoulder. Another reason to dislike Strava; I'm a dick.

Anyway, decided to map some rides. Could I find my 200? Could I heck. Bought a cheap 20 as I knew as soon as I got it home I'd find the 200 - which I did! Grrr. And after two years in a tin can in my shed, it worked perfectly. Double Grrr.

The 20. Well blow me down as it didn't work. Sure it did as a recorder of ultra slow, almost static old man rides, and it charged happily from the PC. It was not, however, recognised by my PC no matter what I did. Arse. Looked on the web; solution being to try and get it recognised as a mass storage device. Hold this button, stand over there, think of a number, double it. Is the answer Argentina? Nope, nothing worked. Another idea being that my Windows is rubbish. Solution to that being to go out and get windows 10 for £120. Like that's going to happen.

Got the hump, went to work. On my long drive home I thought; if it charges, then it works. If it works, why doesn't it work? Why doesn't my PC recognise it? Figured in my head that perhaps the little connectors are not being connectors. Ordered a new connector off the internet.

So I fired it all up, and just held the connector on. That worked! It's not a brilliant fix, and I've still got the hump with it. Even the new connector was a red herring; worked long enough to download a ride, upload an update and register the sodding thing. It then just stopped. Naturally nothing will get it working on my laptop. Oddly it is fine on my wife's work laptop. Pig of a thing it is, and I'm a bit negative towards Garmin.

AD contacted me out of the blue the other day; fancy a spin? Now I'm a harsh character to get on with, and most people only last one or two rides with me. AD is fast, so I thought twice about it. On the one hand he's fast and will make me look stupid. On the other I like him; primarily as he's fast and will make me look stupid. So I went for a spin. Bugger, he's real fast now - taken up road riding with clubs. Off he went. However, I did notice all that road riding meant he was not so keen on mud.

So I picked routes that had lots of mud. He was still ahead, yet the game was on and he didn't totally kill me.

Only problem being we discussed age. It's an awful thing realising that I actually knew the 60's, where for him it is just a concept.

Whilst I'm posting images, here's one I did earlier. I work in product safety, and have to check the goods you buy are safe. Had this one in; absolutely no idea what it did or why. It's unsafe, sure, but do you know what it is? The big bit is an electric motor. 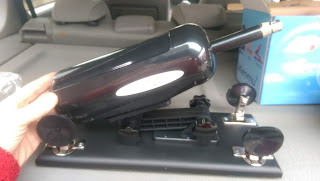 Oh, you do do you? How the devil did you know it's a motorised, multi-speed sex toy?? The mind boggles. As it is unisex, I'll have to give it a go. For professional purposes you understand.