I've stopped measuring rides in miles now, and, appropriately, have started to measure them in hours. My bike is very agricultural in looks, and tractor use is measured in hours, so why not. I'd found it slightly dispiriting to come home and find I'd only done, say, 20 miles on the fatty where I'd do 32 on a thinny for the same given effort. Next time out, I'd fight the bike to do a few more miles, arriving home knackered, not having enjoyed the ride. This seemed all wrong; the fat bike is meant to be about the fun. Hence why now miles covered are irrelevant, and hours out more meaningful.

This weekend I did four hours Saturday, 3.5 Sunday. That's 7.5 hours playing. See? Much better a statement already. It was still knackering. How does that work?

Bless, I know you really don't care, and in a way neither do I. Two big loops in Surrey is all. I'm not one for repeating rides, or cataloguing them. Much happier following my nose and seeing where things end up. To me a ride should be more about exploring - both in the sense of finding things about the environment, and about oneself. I'm very much against planned rides, where each and every week the ride is essentially a repetition of what has gone before.

More importantly, with a family how did I do it? How did I escape? Thank a rare alignment of the planets; Scouts, Bluewater and Sister Act. Instead of being Billy No Mates at home on my own, or supping lonely beers in a Redhill pub, I dragged my sorry ass out into the cold.

The first ride was out to Boxhill from Redhill; my "normal" loop I guess. This time made more fun thanks to it having snowed during the week. True it was now more slush than snow, so I got home soaked, but it was still the white stuff. 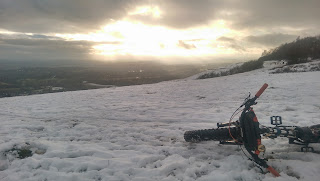 No dramas, no horror stories, no mechanicals. Just a solo spin out that I enjoyed hugely.

My rear brake kept failing; air in the system. I tolerated it, or rather have tolerated it for the past month. Got around it by pumping the lever a little. Today it just gave up, pulling right back to the handlebar. Had to bleed the thing at home. Naturally in doing so I forgot that one syringe is left open, as a fluid reservoir. Spilt it everywhere...

....which made me look at the pads. Down to the backing. Saturday, 6pm, ride the next day 8am. Bugger. Leave them or look in the spares box? My brakes are 2016 SLX. My spares were for something like 2012 SLX. My brakes had finned pads. Bugger. Desperation being the mother of invention and bodging, I thought I'd just bung them in and see.... Clearly a great bodge as they were fine.

The Sunday? You really want to know? Well my son was at Bentley Copse all weekend, and was due to be collected at 12:30. My task that. I was not about to drive all the way over there just to collect; had to make it worthwhile. When I got back Saturday afternoon, all I did was dismantle my bike and shove it into the boot of my car. Thanks to my owning a deeply unfashionable Renault Kangoo, it fitted easily, no bother. Luckily I don't give a toss what people think of me, so I can drive such a utility vehicle quite happily. Shame on you if you think your opinion of what I drive counts.

Bentley Copse is on the Hurtwood Estate, just over from Peaslake. Mountain bike country. I was in the scout camp before the scouts were up; some of the leaders were brushing their teeth. That's early then. It also meant I was so early that the dreaded security detail did not prevent me from using the car park for a few hours.

No plan, just a big old loop, see what's out there. A meander really, with the scout camp at the centre. The only proviso being that I had to bring home some cheese straws for my daughter.

There's no fear of getting lost over there. Generally if you are riding up a shallow incline, you are heading South. This rule often fails me, and I do get disorientated. Quite happily so as well. It doesn't take long to find familiar points, and I take a map anyway - even though the Ordnance Survey map doesn't show up all of the trails! It's very much an area where you plan on getting slightly lost, just following what look like interesting trails. These there are a lot of.

Today I kept off road and managed to not only find Shere and Peaslake, but my way home without a substantial detour. Usually I get slightly lost, popping up on Leith Hill. Today all was well. In the end I rode 50% of trails that I'd never been on before, which I thought brilliant. I also suspect that those same trails were ones that most riders avoid; they were very muddy. At one point I was axle deep in the stuff, wondering why my life ends up like that. Needless to say there were no signs that any other cyclist had ever used that particular bridleway.

My route seemed to be:

How many other mountain bikers did I see? 10. Normally there are literally hundreds out and about, with at least thirty hogging the bus shelter at Peaslake. Today, even though I was there 20 mninutes, I only saw four, and they didn't stop. On the trails itself I only saw six cyclists. One suspects they had better sense than I.

Only the one oddity. Riding down to Little London some guy was walking three dogs, two of them big buggers. They ran up to me, barking, and I thought "this bike weighs near 40lb, I'm doing 20mph, it has a 5" wide front tyre; good luck with that" and carried on regardless. The owner just stopped and gawped; he looked kind of sick. So I stopped next to him and asked if he was OK? He just stood there, gawping. I figured he must not get out often.

It was all icy, with a heavy rain. The fat bike, bless, proved its' worth once again by being generally useless in any conditions. They really are hateful things. However, in reading this you may well note that out of all my bikes, this is the only one I've really used for 15 months now. My Orange 5 gathers dust, as does my PACE and Tassajara - a bike I spent £200 on six months ago converting to1x9 speed, dropping its' weight down to 24lb. Whilst the fatty is hideous, hard to pedal, especially uphill, and has limited grip in most situations, it is just such silly fun to ride. 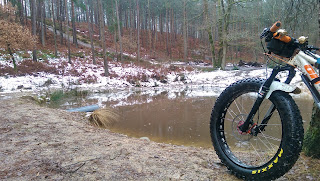 Of interest to myself only, I had to move the Orange 5 the other day. I went to hoik it up, using muscle memory of humping the fatty around. Kind of forgot it weighs a good 10lb less.... Really should use that bike more often.

Arriving back at scout camp the security guy saw me pedal up, stopped me, and asked what I was doing? Private property mate. After I'd explained, he took an interest in the bike - which was probably his intention in the first place. Rather than explain the why, I just got off and gave it to him, which is what I tend to do these days. Off he went, coming back some time later all happy.

You see, it may well be ugly, heavy and generally a pig to ride, yet it brings a smile to the face of the rider. Any more pointless questions?