Been a quiet Christmas really. Chance to annoy my children and do a bit of catchup painting at home.

Only the one job, and it was a fun thing to do. A local self defence club, the Ellis Academy in Redhill, asked me to paint their entrance hall. An odd brief; just paint it, we don't mind what colours or how - it just needs to be tough. Pretty open minded then.

Rather interestingly, and only something I've just realised, this was my first commercial job. Professional face on then. And also I've only just realised I did not seize the opportunity and leave my business cards everywhere. Silly boy.

This is the club entrance as I found it: 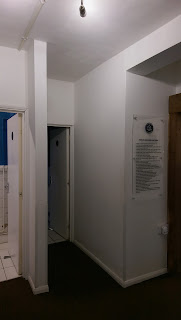 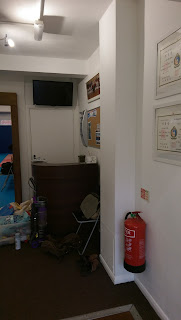 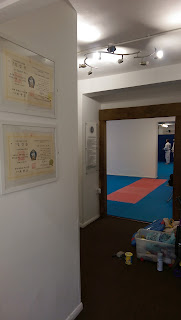 Fairly clinical, slightly grubby [over 1,000 people pass through every week] and I think confusing. The white hall leading into the white dojang, for me, didn't differentiate between room function. Neither did it set off the academy instructor awards, framed in white. Also bear in mind everybody wears white as well. Just white, with a hint of white with white highlights.

Looking at their webpage, Ellis Academy, it was clear that the corporate colours were blue and white. Now I'd wanted to paint this room dark grey, with a dark grey ceiling. Having found a preference for blue, my own choice got zapped pretty quickly. Kind of fair really; it's their business after all. looking back, the toilet colour plus the matts were not exactly subtle statements of intent. D'oh!

White was not on the cards though, as I felt it would be too harsh, and I wanted the dojang to be the focus of attention. This is where all the action happens after all; one would assume reasonably interesting action.

In the end I went for Mylands paints. Mainly because the paint shop said it was tough. The blue chosen was Eaton Square, and this would go on the walls. What to contrast it with though? Here I took a leaf out of the Farrow & Ball paint chart, where they suggest an harmonious white - a whit with a bit of blue mixed in with it in other words. Hence I ended up with a light blue, Islington, which against the Eaton Square would actually look white.

It came out well. 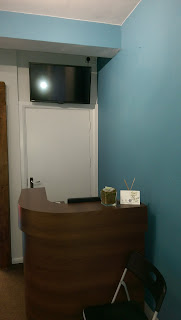 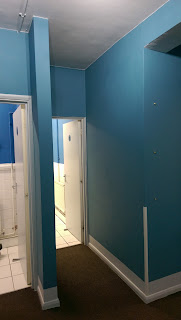 Here the light blue actually looks white, yet at the same time isn't too jarring on the eye. Once the awards are all back up it will look a much more inviting a space, and one that leads the eye into the dojang.

It is a substantial change from the previous white on white, and is now a very dark, rich room with, hopefully, a lot more interest. This all took 5.5 days to complete. Throughout the repaint the main criteria being that the school should remain open. This meant constant hovering on my part as students walk around the building barefoot, and it would not be prudent to allow paint chips, dust or even wet paint to be transferred into the dojang.

Here client intent proved interesting. On the one hand one partner wanted a quick, simple clean up job, in and out in a day, job done. The other wanted a complete and exciting change, take my time over it. Guess which one I spoke to first, and which one last, right at the end of the job?

What did I do?

Interestingly one student is a French lady who works as a designer. She came in, proclaimed the blue beautiful, and said it was nice to see the English moving away from boring white. Here words, not mine. Indeed nobody disliked the blue. It may help that nobody really disagrees with anybody in a fight club....

I've had this type of experience a few times recently, usually slightly differently. Quite a few people are reserved as to colour choice, usually white or beige for their homes, even though they may well be wearing multi-coloured clothing or drive a bright red car. Once they see that colour works, how it does, and that it is not a scary place to be, they are more accepting of change. One nice lady I spoke to professed that she has always gone neutral in wall colour, yet has always had a yearning for a yellow bedroom. Out came my trusty Farrow and Ball book, turn to the yellow section, and no longer is it a scary colour. I rather do hope she goes for yellow now.

On reflection I should have been more assertive with ceiling colour though - the club could easily have gotten away with the dark blue here as well. For me it is not so dramatic a look as I intended. Perhaps next time.

This was the first time I used this paint, and did so on shop recommendation. It's a thicker mix than Farrow and Ball, similar in a way to Johnsons paints. In the tin it hardly needs mixing, where the Farrow needs constant attention. In essence it goes up very well, and you could get away with one coat on a flat wall, where the others require up to three coats. It could actually pay for itself this way as you do not need so much. Quite liked it. However, it is a solid, uniform colour that does not seem to change in different light. For corporate use this is great.

For visual interest Farrow and Ball still wins for me, as it is a more engaging paint looks wise, seeming to change through the day. For home use I'm very much drawn to their colour theory, which I find helpful. Colour is, after all, a scary thing for most of us and so any help is appreciated. Their book "how to decorate" is far more interesting than it sounds.


Ellis Academy of Self Defence.

Must say how impressed I was with the academy. Everybody seemed so friendly; each time somebody came in I was addressed as "Sir" which was a nice touch. The daytime classes I witnessed weren't defined by grunts of frustration, shouting or indeed any aggression. Certainly it is a physical club, where body contact is a big element of what they do. Yet all of the classes I witnessed were defined by laughter, with people smiling and chatting as they left. Not only that, I'd expected the environment to be dominated by massive, testosterone fuelled males. I was so wrong. Mainly children go for a start - lots of children. Then there were women, again far more than I expected. Finally men. I'd not expected that. And even the men were very polite and deferential.

What struck me, though, was that everybody was chatting to everybody else. There didn't seem to be an age hierarchy. Adults were happy chatting to the children, and it seemed that the children were just as happy to chat back. The whole place was obviously defined by a lot of physical effort, yet it came over more as an active social club than anything else.