Sunday night, 22nd January 2017, looked to be the last of the frosty nights. My weather forecast suggested a slight warming. As I like riding in the frost out came a bike, out went I. told my wife I'd be gone 40 minutes. Got back almost three hours later. 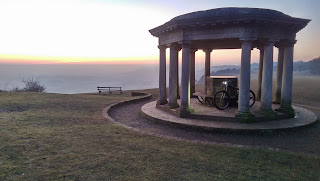 I really like solo night rides. For a start there is often nobody else about and you share the country with wild animals. Badgers and deer are the worst; they seem to wait for you to just about pass before leaping out. Badgers scare me - they are just a dark blur zipping past your front wheel. Bats are the most fun, as at dusk they seem to love flying in front of my helmet.

There's never really any issues. Sure every so often there will be a group taking drugs or watching others get frisky in cars. Easy to resolve, especially with near 2,000 lumens of concentrated light. I'm there and gone too quick for them to really react.

Occasionally there will be some dog walkers or other cyclists out, all with the same intention as me; to extend the day and appreciate the night.

There have been group rides, which have been fun. However, when it boils down to it, a lot of people don't actually like the nights....

As I'd used the Orange 5 the day before, then so it came to be used this night as well. Naturally seeing as I'd done a rush job (aka bodge) on the brakes, they played up, being ever so slightly on the whole time. Just enough to slow me down on the flat, ruin any uppy bits, but be OK when pointed downhill. Really must look at them....

I'm not one to chase the latest fad in lumen output. My lights are perhaps five years old now, with a mix of batteries; one of which I found. Old Gemini things bought in the sales. They are reliable, and perfectly adequate for solo adventures. Indeed more than adequate as I rarely use the high setting. On full moon, clear nights I often just turn them off when going uphill. My whole system probably cost me less than £180. I've got four, four cell batteries. Lots of cables, with two chargers. Three headlamps; one 850 lumens, a 1,500 one, and a bright 1,800 lumen thing. I can run them all together for over 4,000 lumens of output - more than enough. Rarely do as the batteries don't like it.

You know when I said the frost was going? Today I popped out for an hour. Wished I'd not bothered. The frost has turned the chalk into a kind of spongey, grippy mud that sticks to everything.