I have been riding for the past few months, although a bit on and off. Ridden Minton Batch, built up a fat bike, torn cartilage in my knee, and broke my collarbone. All reasonably busy stuff. I guess why I've not been posting is, well, to be frank my blog is no different to any other similar website; a bit boring. "I rode this, I rode there" type of thing. There's any number of these things out there, and they are all pretty much the same.

Still riding, still having fun. Just realised that the blog, or even website, is no longer the right forum to advertise such. The right forum is just to get out there!

Anyway, the collarbone. Out for a ride with the UK Fat Bike Club over at Frensham just before Christmas. About 16 of us out and about, nice bunch, not showing off, just riding. About an hour in my front wheel caught on something, went sideways, slid, then caught. I went straight up and over, landing heavily on my shoulder. Got up, the other riders helped me straighten my bike up, and off we went. Shoulder not right; knew something was up. Carried on like that for another four hours. Kind of suspected something was up as it hurt. X-Ray later on, collarbone broken, four weeks off work.

In those four weeks I have tried riding. My doctor actually advised this to avoid something called cold shoulder. You try riding with a broken collarbone, as I have done a few times now. Not entirely pleasant, and most of the stuff you do without thinking, such as riding down rocky stuff, or over tree roots, well lets just say gritted teeth are involved.

I am convinced that using the dreaded backpack saved me from worse damage. On the day I did it, it promised to be cold, so I'd filled the pack with jackets, spare tops, and lots of food. The tightness of the straps most likely prevented my collarbone breaking in more places than it did. Saying that, there was an awful lot of soft tissue damage, meaning that whilst I perhaps saved myself more bone damage, I created more muscle, sinew and whatever carnage. In essence, a mess which ever way you cut it.

Now I've broken a number of bones in my time; with this new one, the tally is ten. Ten seems to me a lot for a fifty year old? Only three have been done on the bike. Kind of getting used to breakages in an odd way. Know what to expect in so many ways; pain, lack of mobility, no sleep and big lumps. With this one I actually went to work the next day, and for all of that week. That was until the end of the week when it was reasonably clear that such activity was, funny this, making things worse. It was only a nurse who said that with such an injury I had no insurance to drive that woke me up to how serious it all was. Arse.

Rather oddly I found this injury less debilitating than a broken rib. True it hurt like hell, though only when lifting my arm or trying to lie on that side. With ribs, you breath, it hurts. Sneeze, you're down! Laughing is no joy. My collarbone was generally unobtrusive 95% of the time. I had a bruise that went from shoulder to the bottom of my ribs, and a lump the size of an orange. That all hurt, yet the worst pain for me was from soft tissue damage inside. Guess I'm either tough as old boots, broken too many bones than is healthy for me, or was lucky?

Oh and the sling they make you wear; that I found worse than just letting my arm swing free. It kind of sat on the break. I was so happy when the Doctor said not to wear it as it was stupid. Generally mine feels like a massive bruise all the time. 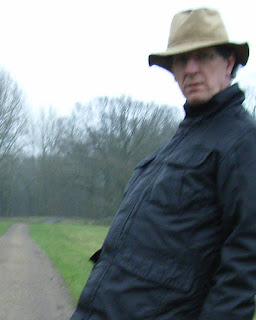 Of course the past month has also been highlighted as being the wettest since 1910. Every single ride has been a sodden affair. I've been through every re-proofing product on the market trying to get my gear to work. Finally realised that biking + constant rain = at some point my gear will fail. The Sunday just gone was the best so far. Started wet, got wetter, then ended up being almost torrential, with horizontal, sleety rain. A truly vile day. Even my mate, PP, who never moans, said it was no fun and he'd given up, taking to the road home.

Oddly, although constantly wet, and riding in Five-10's, I've never been cold. All I wear is a t-shirt and outer waterproof jacket. My guess is riding solo for the past month, there's been no faffage time or hanging around cafes. Usually doing that results in getting cold early on in the ride, and once you are cold, that's it, miserable ride from then on.

None of my cycling kit has worked well. I've subscribed to Fox clothing; got one of their £200 waterproof jackets, lots of shorts. All of my Fox kit has proven utter rubbish. The jacket would be more waterproof worn inside out. The shorts just fall apart. My best kit has been a Nike gore-tex golfing jacket bought for £70 (I don't golf), and any cheap crap bought from farm shops. Got several £20, no name, softshell jackets that have proven nothing short of brilliant. Still buy cycle specific clothing now and then, though with no conviction that it will work. How shocking is it that a cycle jacket from Fox is pants, whilst a ten year old golfing jacket from Nike still works well?

The fat bike? Fancied one is all. Built up an On-One Fatty. I'm pleased with it as it rides better than it looks it should do. I'm not all evangelical about it though. 35lb, tyres that do not really like mud, plus wherever you go people stop and point, and then they collect mud like no other bike. You have to suck a lot of stick. Not for one second do I regret building it, and do you know what? All the stories about once you have one, well you do not ride any of your other bikes is kind of true. There's a playfullness to them that is appealing, plus, well after a time you kind of like people stopping and pointing. There's also one other thing I like; a stock standard fat bike is a rare thing. Most owners customise them to a degree; hand built wheels, odd handlebars (mine are Jones) or home cut mudguards. You don't see that with most bikes outside of the singlespeed or vintage bike club. 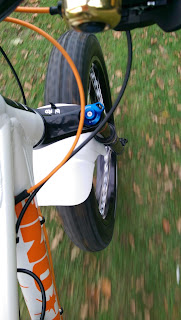 My knee? Being a dick at 21 years old that. Rode my motorcycle in to the back of a van. Never been right, yet the doctors say corrective surgery would be worse. Suck it up boy; you did it, pay the price. It heals itself, I forget it's dodgy, rip it open every five years or so. For two months walking has been an issue; bit of a limp. On the bike it is usually fine - it makes the odd loud "crack" now and then, and sometimes landing from jumps it kind of collapses....

Used to use it. Guess like most the King of the Hill appealed. Set some fast times, had some fun with it. Then my times got beat, so off I went to beat them. Things just got silly. Had some real close calls. Downhill, 40mph through trees, no chance of stopping should anything happen. Chatting to people, most were the same. Realised that setting some of those times were beyond reckless; they were needlessly aggressive. Pulled back a little, and oddly enjoyed the rides more. Less frenetic. Now I don't log on to Strava any more, and have actually stopped taking my mapping device out. It does not work for me. My rides, when I'm not breaking things, have improved.

No more weekly blogging, telling you my routine rides with mates. Bit too dull that. You can get that stuff from any social media site, and they are all the same. I'm still out there doing stuff; just booked up Bike Park Wales. Kind of figure being a bit more silent, a bit less internet gobby, and a bit more get out there and do stuff is more interesting.