I'm guessing, as only 70 people do this every six months, you probably don't know what it is. Well it's a kind of charity fundraising thing for the local school in Peaslake, Surrey. You are given a map, some checkpoints to find, and off you go on your bike. You pay £15 for the privilege, and it is money well spent.

MTBO stands for Mountain Bike Orienteering. Essentially the organisers set up a series of checkpoints, and you have to find them. The trick is in finding as many as possible, in the shortest time. Generally the quickest people are the solo riders. 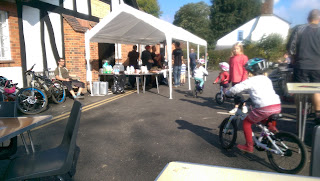 For three hours this is your view of the world: 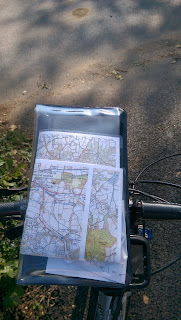 You do look up now and then, but for the main part you are map reading on the fly. Is the checkpoint straight ahead? Can I chop a bit out? Shall I go to checkpoint 17 or 21 next? How long have I got left before I have to get back? How the heck do I get back!

Oh, I didn't tell you that did I? You are timed. As a solo male mine was a three hour event. It's not an easy thing to do. You're kind of out of breath the whole time, and by the end my thighs were burning. As I write this my shoulders ache and I'm tired all over.

Actually there were none with the event itself. It's so smoothly run. The problem was with my being a moron and following the herd at one checkpoint. Ran solo for two hours, found all the checkpoints easy enough, doing well. On one I ran into over twenty people looking for number 19. The instant I met them I knew they were looking in the wrong place. Knew it from the map, 100% certain. So why, when they all said the map was wrong, did I listen? Cost me ten minutes, one extra hill-climb and the loss of fifty points later on. Those fifty points lost me three places.

The only other issue was me. Carrying too much mass around the middle. That will have to go for the next event. Really, it will. Fat people don't win cycle based hill-climbing events.

So how did I fare?

Not too bad really. I've done this three times now, and this was my best. The first time I entered, I came mid-point. The second time I got greedy for points, and got hit with a time penalty equivalent to one hour's riding. So this time I was determined not to be penalized, and came in six minutes under time and in sixteenth place out of 67 entrants.

Bit miffed with that result. Should be happy, but following the teams at checkpoint 19 cost me three places!


Will I ever win?

No, not a chance. Not even an outside chance. No way.

You see the leaders do it in two hours, an hour less than me. I could, with less mass, go a tad faster but not that fast. You see them now and then, and boy do they fly. Right on the edge they are.

The ones I saw were wearing lycra skinsuits, no backpack, nothing. Them, the bike and a map, usually electronic.

The other thing is, even in two hours they get all of the points. In my three hours I managed to find two thirds of the points; they get them all.

My last two events I based on the A25. Figured both times that riding five miles (8km) along this road, from Shere to almost Westcott, and up Leith Hill was the quickest time to get great points. I'm not the only one to do this either. Driving home I saw loads of riders with maps fluttering around their necks.

However, it is wrong. No checkpoint is more than 3km from it's nearest neighbour. So riding the A25 means, in a sense, three missed checkpoints; a minimum of 150 points. More really as it involves a grand old slog up Leith Hill. You are talking a good hour here if you go West to East; that's an hour with no points. Going anti-clockwise may be a better option, as you can come down the hill real fast, and there are some points had at Shere. This time I avoided that road, avoided the climb, and gained 200 points over my previous best.

The other thing is to try and avoid just riding to a checkpoint, then turning around and riding back along the same bit of trail. Try and divide the event up into circles if you can. This fits in well with the geography here; three hills, so three circles. I did two hills, so logic would say I'd get two thirds of the points available, which I did.

Why did I do two hills and not three? Carrying too much mass. Really, the last few points were lost to me because of a love of crisps and beer. Fine going downhill, not so good everywhere else.

Sure you could shave a kilo of your rig, use bigger wheels, or faster tyres. Only relevant if you are a top dog. Below top ten, map reading skills, a bit of fitness and a reliable bike are your friends. Just use what you have.

Next time I want to get closer to the top ten. I'd really like to achieve a similar time to the top solo female. I followed her for a time. Here and there I made up ground on her, mainly going uphill. Point the ground downwards and she was off like a bloomin' rocket.