On Saturday we were in Wimbledon pretending to be market traders with my t-shirts. Now this is a remarkably hard thing to do. You start early, lugging product around. The stall has to be set up, then you're on your feet all day, chitter chatting with strangers. Sometimes, just sometimes, you sell something. 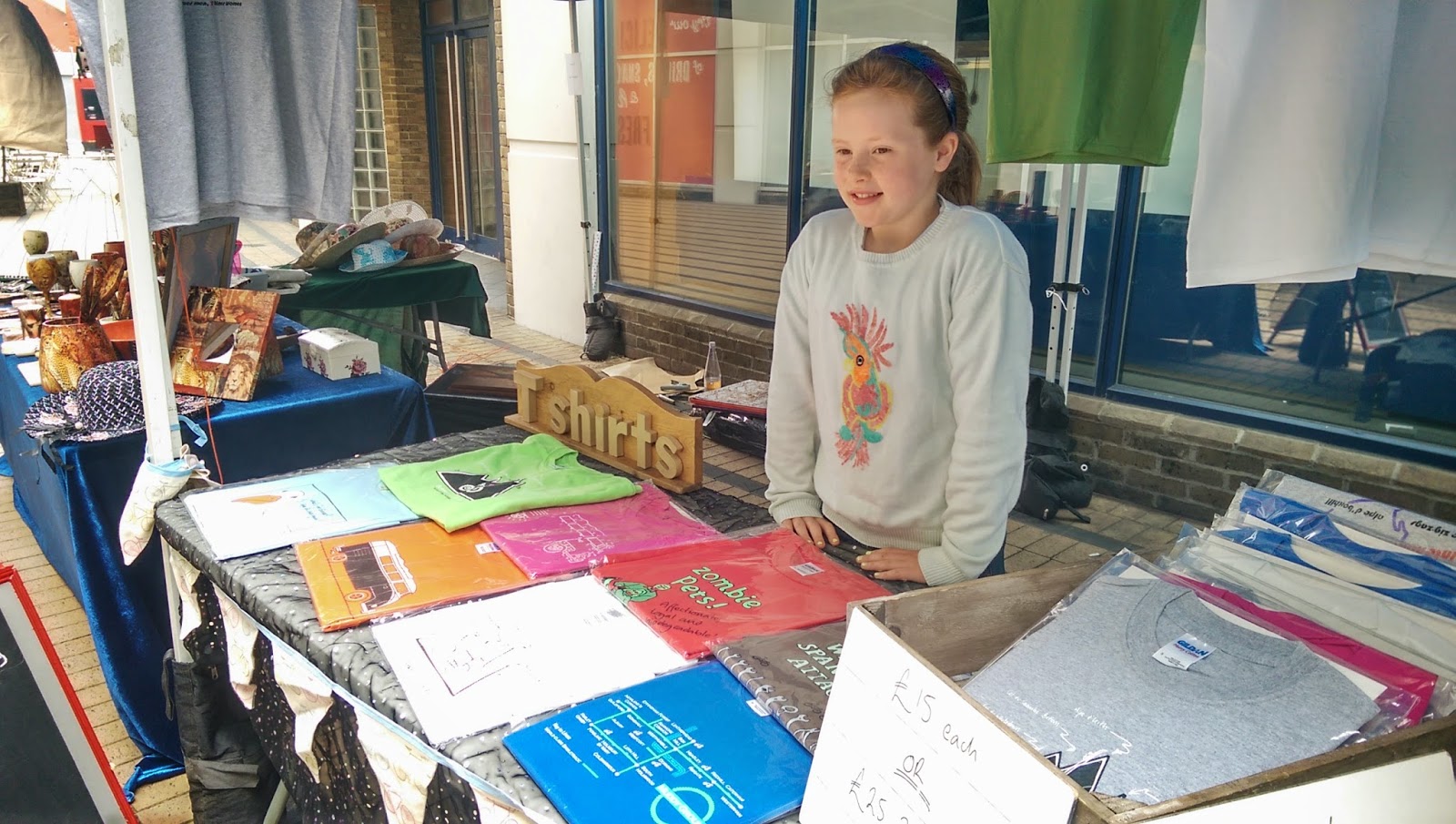 For the main part though, you eat crap. A surprising amount. I'm not saying individually each bit of cake or bread or burger is crap; at the time they are really tasty. But over the course of a day it all adds up to a whole load of junk food consumption. But it can't be helped. You take your own food, but the stall next to you is frying onions. There's the lady with the home made cakes! Temptation is too great and resistance is low.

Used to live not too far from Wimbledon, but have not been back for twenty years. Kind of expected more. It's OK, but nothing special. You'd be disappointed if you'd made a journey to get there. A nice Evans bike shop, few restaurants, but otherwise bland.

Surprisingly expensive coffee though. I'm not mentioning the cafe, it was just a cafe. Actually I will; Bill's. I ordered two coffees and two orange juices. Gave £10 to the waitress. She didn't come back with change. I work in London, have done for over twenty years. No change at all from £10 was a surprise. My wife commented that she was surprised they'd not asked for more.

Gosh, I'd forgotten. In Evans. Those Hoy bikes. Look nice. Found one for my ten year old. Smart, feeling flush, sold some stuff, needs a new bike, why not just buy one.

"Dad have you seen the price?"

For a bike for a ten year old. That's nuts. Went on-line, found a Peugeot racer for £40 from eBay, very similar spec, same colours. Bought it, just like that. I know I sound old, but since when has £700 been normal value for a child? That wasn't even the most expensive one. Realize economies of scale and all that, but it's a mad old world when children's bikes are that expensive*.

It's also a mad world when an older, but still decent bike bought used, costs less than an average family meal at an average cafe in a boring shopping precinct in Wimbledon.

So the next day my body has been fueled with nothing but air and e-numbers, and my wallet drained through poor value foodstuffs. Hitting all the high notes in life here. Even getting up I felt sluggard and really didn't feel like a bike ride. This even though my bike has new tyres and new brakes, so is spiffing. Going up Reigate Hill there were a couple of riders in front of me. Old boys out on tour on bikes with racks. They mullared me completely and I was shattered at the top. Really tired.

Caught them up at the toilet block, they were 70 if they were a day; grey hair and wrinkles. They left on my route, I followed, didn't see them again. On form today Muddy.

Do I cut the ride short and go home, like the bad old days when I was fifteen stone? Ride to the top of the hill, coffee and cake, go home two hours later all sweaty? Gradually pile on the pounds until it is too late to turn back? OK, OK push on, go for a ride.

So I did. Non-stop slow express. Didn't stop at Ali's. Couldn't face her expensive instant bulk buy Nescafe in a plastic cup. Headed off to Bike Beans via the golf club and Epsom Downs, and was almost there when I realized that if I stopped anyway, I'd not get going again. Ho hum, tired legs, I'm in Ashtead may as well do Box Hill and home. So I did, not with any joy, vigor or enthusiasm it must be said.

The bike? My new bits? I did ponder on them. My front tyre, a High Roller II was great. Grippy, did what I wanted. Oddly small for a 2.35 though. The rear? A harder older but still new High Roller in a 2.1 wasn't so good. Seemed to have less grip than my old Aspen, and that has no tread. Quite a few times I stopped mid trail as it felt as though my saddle had come undone. It hadn't. The tyre was just slipping horizontally across the trail. Very odd feeling. Not sure I like it. Perhaps it's a tyre that doesn't reward mediocrity.

The brakes? Well now here's interesting. My Tassajara has had hand-me-down brakes for years. Ended up with a wooden Hayes rear and soft, ancient [2004] Magura front. They worked. This week I bought a pair of Shimano Deore jobbies for £70. £70 for the set, front and rear. A few years ago RG had a rear cheapo Avid repaired for £45. New pads and a bleed that. Crazy that for less money than repairing old you can have a brand new brake. Reuse, recycle or reduce? Nah, buy new, screw the environment.

Lovely they are. Easy to fit, even for a numpty like me. Fit them, measure up the hose, remove and cut the hose, refit, job done. Scary cutting the hose must admit, but it was easy. Makes one wonder about bike shops and how much they charge, but then I'm just fitting new bits to a looked after bike. Easy that. Try repairing an old, shagged out bike to time limits. Hard that.


Downhill off the North Downs - Hermitage.

There's a downhill that we used back in the day. It terminates on the A25 or along the NDW footpath, where I always push my bike officer.... Anyway, it was always a fun run; off camber, rooty, quick with a big drop to the right. Those in the know would do it. The problem being the footpath terminus; you'd have to do it by stealth.

Tried it today, the first time in a year.

Thanks to local government cut backs the undergrowth hasn't. Been cut back that is. What was once a lovely, if cheeky run, is now nothing more than a duck and dive through undergrowth. I got slapped in the face by branches, my hands and legs got cut by bramble, had to carry my bike for a bit - downhill! - and the nettles were literally a pain.

The, er, push along the footpath was actually a push.

Sodding awful. I'll nip along with my gardening tools for the undergrowth one day....

Got home shy of three hours out. Distance? Could be anything. I've seen a similar spin out, doing essentially the same route, as being described as anything between seventeen and thirty miles. Go figure. Sat Nav accuracy eh? It's a fairly common, fairly hum drum route that's easy to navigate, and one that feels longer than it is. You want to call it thirty miles? Whatever. It felt like it.

Got home, wife is looking at my wood pile. She has a log burner, but it is my wood pile. It's a metre away from the ideal. If it were slightly over a wee bit we'd get a table in there. Could I move it? Sure, there's only 600, 3kg logs Dear, why not?

All of this needed moving.

A metre to the left.

Tired? You don't know the meaning of the word.

On any normal Sunday a ride followed by log humping would have been fine. On any Sunday I'd normally be fueled by pasta and veg the day before.

Not this Sunday. This Sunday I'm fueled by cake, coffee, white bread and Spanish savories.


*I've just looked at the Hoy website. The most expensive kids' bike is £600. Still a lot, but a touch away from where Evans are. Actually looking on the website I can see where he's at and really like the bikes. Good call Sir Chris, good call. Where Boardman took a few years to find his feet, and still indeed has a slight stigma to the brand, Sir Chris has obviously secured better backing and has gone for it tooth and nail. I like the Boardman bikes, but the Halfords and MAMIL connections are too much.