The hobo coke can stove, an improvised spoon and a curry. What more does a man need?

In my younger days when out and about on the bike I'd take with me a little gas burner.

Hard to believe, but in the UK we didn't really have that good a café culture in the 1990's and so, here in East Surrey, unless one went to Box Hill, Headley Heath or all the way over to Newland's Corner, there wasn't any real alternative.

I lived in London and my local rides would often take me to Ranmore, which was void of cafes*. If I wanted to eat, either sarnies or cook something up. This attitude to self sufficiency was reinforced through trips to Scotland, Wales or dreary Cornwall. Yet we evolved, and café stops became the norm so my little cookery expeditions stopped.

Last year, as my boy is now heading to Scouts via Cubs, and as we had the builders in, we started to do more BBQ's and to cook out somewhere. Hard to cook in when the kitchen is full of workmen cutting wood. This was fun, and looking online we found people making their own Hobo stoves out of beer cans or cutlery holders from IKEA. Way to go people! As an experiment we made soda can stoves, and whilst most turned out pants this little one actually worked quite well so we kept it.

Roll on this year and I fancied a longer ride, one over to Ranmore. Why not use the little burner? Well why not indeed, so I did. 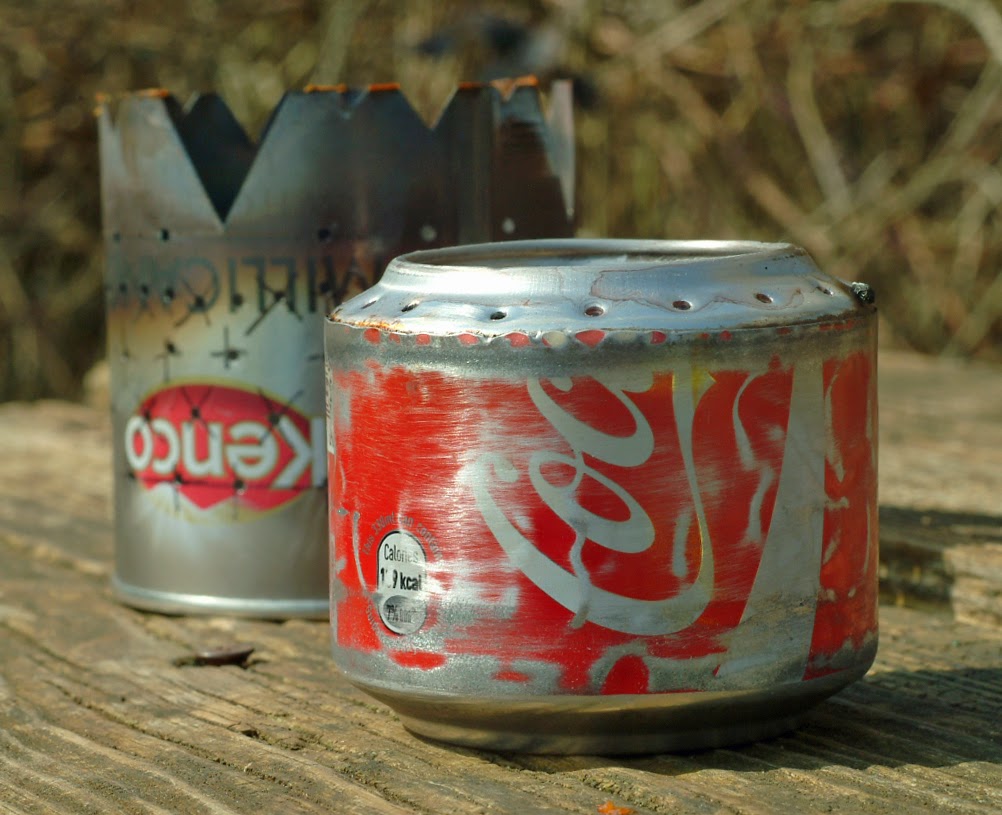 The burner isn't much to look at; just three empty coke cans cut up and jiggled / cut to fit inside each other. The pan support I made came from a Kenco coffee tin. For fuel it uses methylated spirits. And yes it is as dangerous as it sounds. Early experiments in use resulted in no eyebrows, a burning hand and lots of burning fuel spilled on to the patio. A bit of practice gets you 90% safe, but sudden gusts of wind still result in flare ups and burnt hands. There's no real way of controlling them you see; once lit, they kind of just burn. Dangerous but fun. 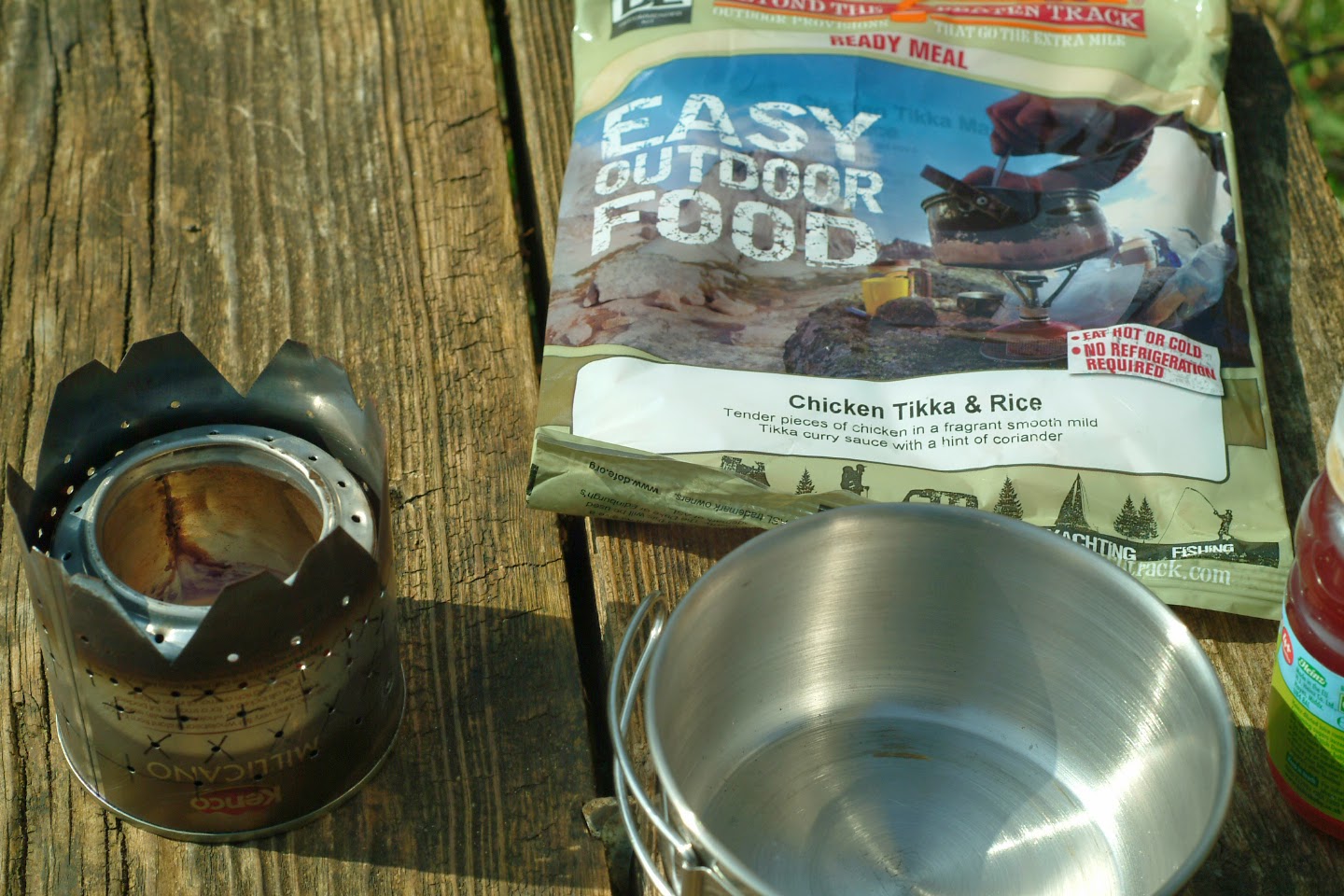 Today's dinner was a 300g ration pack of chicken curry left over from last years South Downs Way run. It didn't get used as my partner had the grumps, so it got kept until now. Although it looks horrid, and leaves a yellow stain on everything, it was actually really tasty. Perhaps this had something to do with my being hungry and knackered from an unexpectedly long ride. 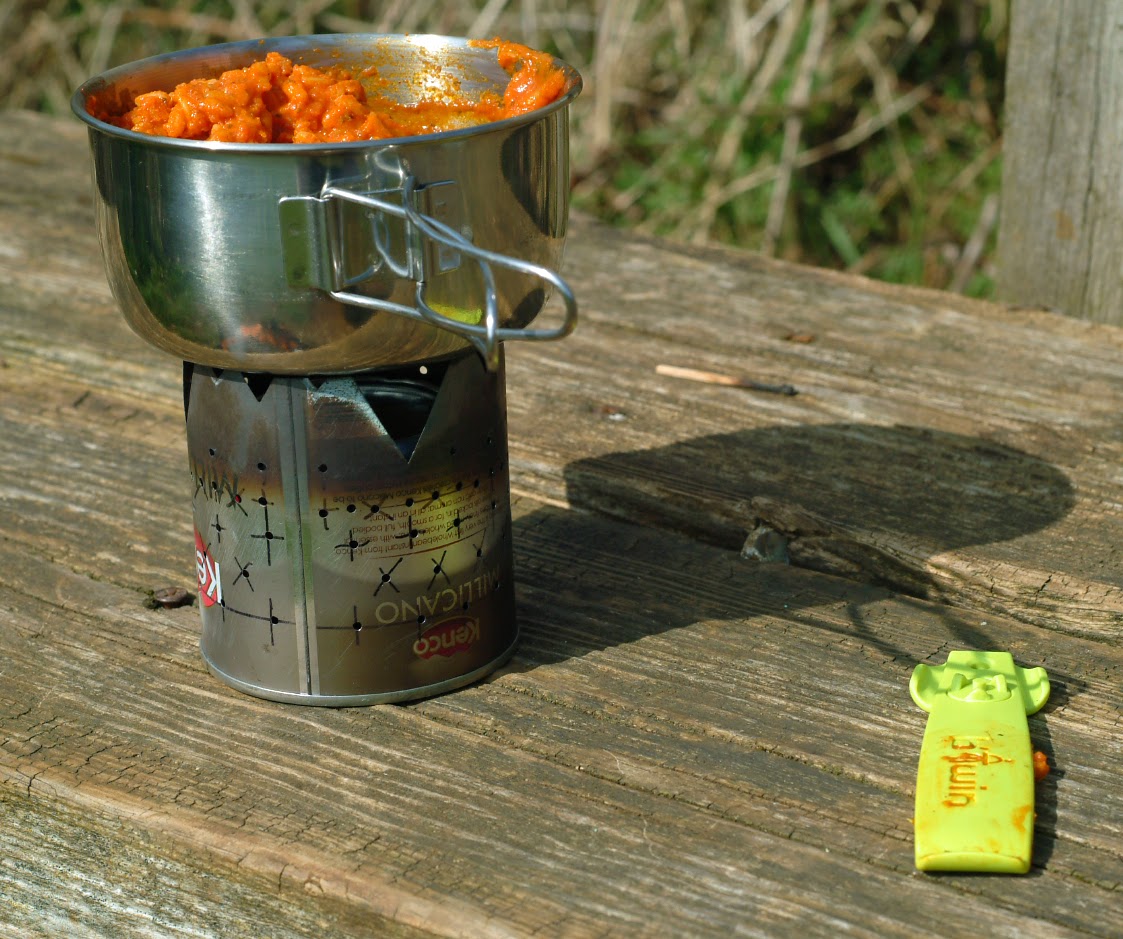 The stove in use. My pan support is probably a little small, but the burner fits snuggly inside it. Perhaps some form of bent wire may offer additional support? It works well enough for one person though, and didn't take too long to heat the meal up.

Naturally I forgot a spoon or fork so had to improvise. Rather oddly the tyre lever from Decathlon's B-Twin range worked rather well, both as a stirrer when cooking and as a spoon afterwards.

Coffee I made at home and carried on the bike in a thermos. Not done to save money or to have coffee I like, which was a bonus, simply an addition to the self-sufficiency ethos of the ride.

Points to note from using an alcohol Hobo stove:

Ultimately it must be said that taking the stove out and using it really made the ride for me. Normally pre-ride there's that slight "I've done this before, so why bother, it's boring" attitude that only disappears after a few miles.

I was excited the day before and spent the night packing. Today I shall cook!

Give it a go; instead of doing a normal gnar | Strava loop to café A, B or C why not dig out your old camping stove, ride slowly to a far away destination and try a cook out? Honestly it was bloody brilliant, even solo. With a few mates it'd be a cracker, especially on a night ride.

Actually scratch that; 500g additional relatively soft mass in a pack is nothing and on my ride I still did silly stuff like jumping or a bit of downhill riding. Best of both world's then. What exactly are you waiting for?

*Now has the rather excellent Pilgrim Cycles shop and café.