February 02, 2014
I've know summer days both colder and wetter than today. Ten degrees C when I set off this morning, bright and fine. Lucky really as I'd been asked to lead a local group of five keen cyclists around East Surrey; Mark, Dean [whom I suspect Dean lives near my old mate Trevor the copper] , Mike, Nick and Iain - thanks for the ride by the way! Rain would have killed it. Funny, but today I realised that in effect I've been 'guiding' little groups for near twenty years now. I've not kept count of the number of people who have been shown around this corner of Surrey by Muddy Ground, but it is well over thirty now, which is pretty cool and something I enjoy doing. Never any charge; all I ask in return is a cup of coffee somewhere.

Guiding, for want of a better word, is an interesting thing to do [perhaps "showing people around" may be better and less pretentious]. For one all sense of it being a personal ride, of going where you see fit to go, gets thrown out of the window. As does any sense of a planned route. No point deciding on a thirty miler if at the nine mile point people are asking if we're near home yet. You have to be really flexible as to agenda, not to mention pace. No point including that fifteen minute, max heart rate climb right at the end of a ride if nobody enjoys climbing now is there? You don't, however, avoid all obstacles. People need a sense of achievement, of having stretched themselves but not going past breaking point. What's the point of that? Hope to have gotten the mix about right today, yet there's always that doubt. As for not doing what I wanted to do, so? It's nice to mix things up now and then, to break free of the norms, all-be-it in a small way. Headley is still Headley whichever way you cut it.

So today the agenda was always Reigate to Headley Heath. Why? Well there's a whole load of different ways of getting there and back; the ride can be stretched or constricted at will. Going up Reigate Hill it was reasonably clear that this group were not unfit malingerers. Sure there were some sweaty faces, but it is a hill-climb at the end of the day; it's never going to be easy. They all did the hill in good time. So instead of the easier golf course / duck pond route we took the North Downs Way. It's not an hard route either, but hard enough if you're new to cycling or have not done it for some time. Especially now with all the mud and standing water we have, and the impossible climb claimed five victims this week. That can be a nasty climb though, and I didn't warn the faster boys how hard it could be. 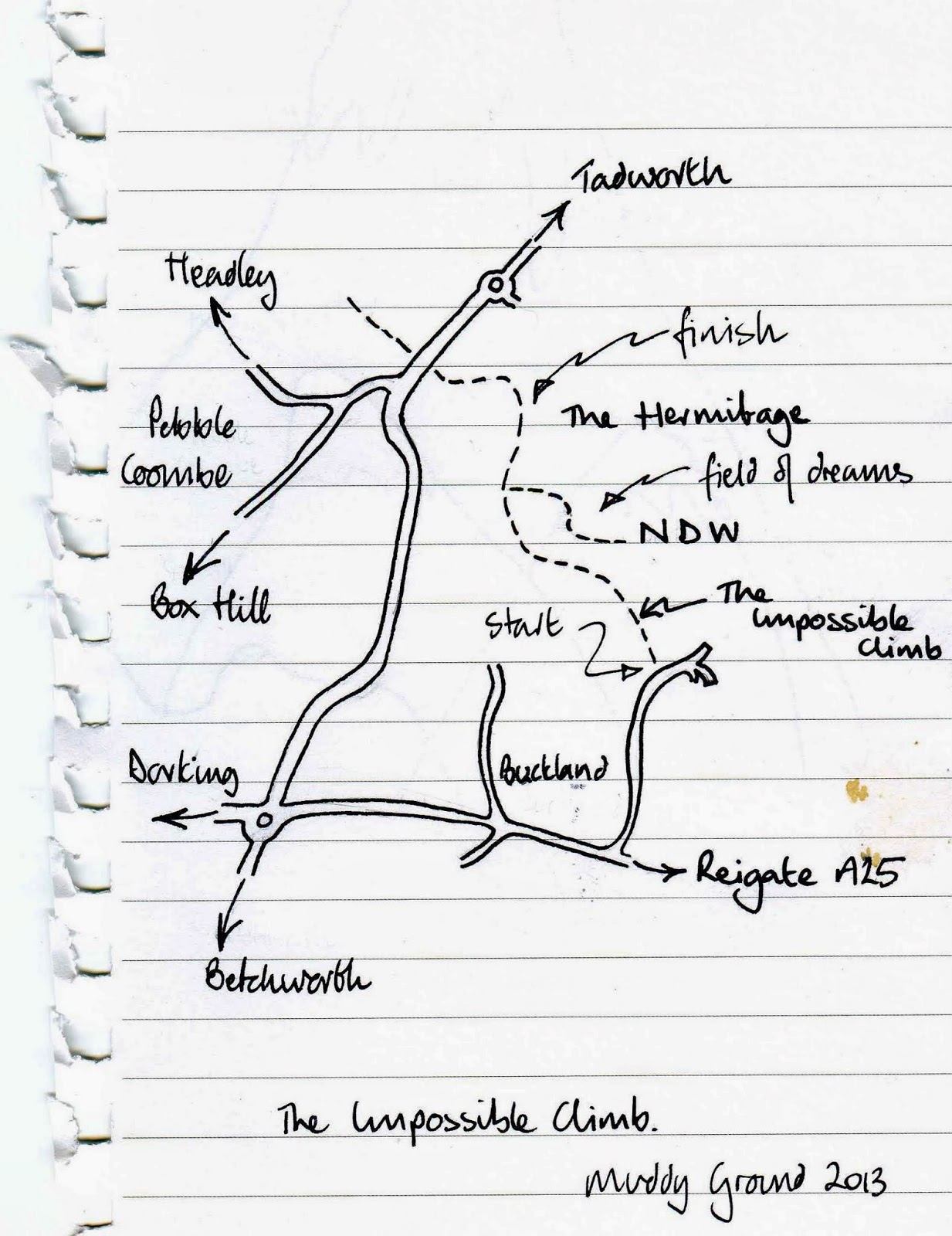 At Headley there were a few comments about how long will it take to get home? Hmmm, a spin around the Heath, a diversion to Box Hill or Epsom Downs were out of the question then. There were a few comments about the hills, but heck! you have to Man Up at some point, so these comments I largely ignored. I did decide to avoid the worst stretches of mud though. It would have been boring to do a simple there-and-back route if we'd used the NDW, so under the M25 it was and I was glad we did. The smiles at tackling the little drop-offs on the trail leading to the M25 were worth it. People do like to go down hills then.

Now whilst I tried to avoid the mud as much as possible, there was a big fail. Kind of hard after a month's rain, but at least we didn't head over to Phil's Bush and the kilometre of mud. The golf course started to claim victims, and the pace of the group dropped, which was fun to watch. Luckily there are a few short cuts back from there, and we were back at Reigate Hill pretty quickly. Here a gauntlet was thrown down; Iain laughed and suggested I'd find it hard to find another hill between here and home.

There's always one more hill. In this case a thick, gloopy git that added an easy five kilograms of unwanted mass to our bikes, and was largely a hike-a-bike carry. At the end is my A & E Drop to the stables, but once you know where the pratt fall is, it's easy to do. It looks more alarming than it is.

In all the years that I've been taking people out, or have been asked along as today [thanks Nick!], I've yet to meet an arse. Today was no different as it was a happy little group, even when there were little issues. Nobody got aggressive, nobody showed any egocentric attitudes, and there was some mild piss taking going on. All of this was perhaps down to all of us not actually possessing any real technical ability on a bike. None of us are freeride Gods at the end of the day, just normal 9 to 5 bods out to dump some stress through riding a bike in some gloop for a spell. The bikes used were pretty eclectic as well, from basic hardtails through to Dean's trick susser. Personally I don't think it matters a little bit around here what you use. Indeed Iain mentioned he'd done the same route, more or less, on a road bike. As for abilities, sure there were variances but nothing that a mornings' skills course couldn't solve. There was a great enthusiasm there, and that counts loads.

It wasn't all plain sailing. I made the mistake of leading from the front today, when I should have put myself mid-pack. My bad, and I had to go back a few times to find stragglers who had missed turnings. Apologies for that, but I learnt where to put myself by the end. There were a few minor mechanicals, and the incessant mud dulled the spirits a little.

So which bike did I take? The PACE RC303 was high on the list, but the new transmission only arrived by post yesterday and is still in the packaging. Could I trust the reliability? The Tassajara, whilst old, is also quite fast and would have meant me setting a silly pace. The Orange 5 then? No way! That's showboating. But is it? It's a 26"er for a start, so old tech now. It's also beaten up so shows a few battle scars. I also wanted to ride it - the sun was out and it's a good mood bike.

Orange 5 it was then. Lovely. Took ages to clean afterwards though, which was a small price to pay.

So if somebody asks you to 'guide' them around some trails, go for it. It's fun. You do, however, have to hold things in check. I'm not a super fit rider by any degree; mid pack at best, and then not a young pack. They'd smoke me. Yet if you ride on a regular basis, fitness isn't the only small advantage you'll have. You'll not get a sore ass after five miles for a start. You'll not be fighting the mud. You'll be riding places where you are well into your comfort zone riding. You'll know when and how to change gears. One of the people today was a fitness instructor twenty years younger than me. No way am I fitter than him, absolutely no way. All of the little things that you accumulate over time, doing the regular but slightly boring Sunday rides or Saturday night spins, count for an awful lot. Never dismiss the cycling advantages of "getting the miles in" that the Roadies harp on about. Miles and time on the bike sometimes, just sometimes, count for more than fitness.

There's also the question of refuelling. We weren't out for ages, but I was the only one who ate anything during the ride. No idea where it is from, perhaps an American magazine article, that suggests eating at no more than 45 minute intervals if you are out on a longish ride. Most of the group drank water, yet this is just one bit of refuelling surely? Perhaps the P E teacher could correct me on this one!

Pity it was slightly spoilt in learning that Philip Seymour Hoffman had died. He's one of the few actors that actually made a film better for being in it. But by heck, 46?