The trails never change, do they?

November 03, 2013
Bit of a storm last week. It made some slight alterations to the trails. Spoke to an horse rider about the bottom two trees - not clear from the photograph, but the furthest one must be getting on for a metre thick. He mentioned "chainsaw" and "firewood" so I'm unclear what his intentions are ;¬)

The above shows a trail that has run straight and true at this point for a good twenty years. This tree stood off to the side and was a bit of a focal point as it was quite gnarled in appearance. Obviously it was also a bit dead. And the image below? Well this is near the top of The Impossible Climb [as is the above photograph - must have been chanelled wind up there] and has really stuffed things for the 4x4 brigade, not to mention destroying the end of the cheeky trail that was developing around it. It's easy enough to cycle under, but it is just at the point where grip is at a minimum and you need all the balance you have. Apologies for the poor photograph; I'm addicted to £2 flea shop cameras. 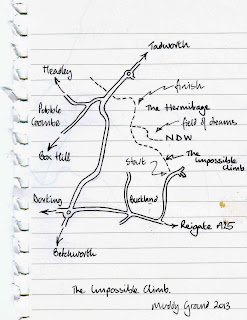