What a surprise - Bude is actually quite nice.

July 28, 2013
I realise that a few people will be a bit moody by this, but I just don't get Cornwall at all. Been a few times over the years and it has held no appeal. Inland there is just gritty air and dingy featureless MOD property. And the coast is all "£2.50 first hour, £1 after or £10 all day" parking. even brought a mountain bike with me once, which was a joyless enterprise. Turns out that over the years I've been to the "wrong bits" of it - the right bits naturally being person dependent. Anyway, I generally don't like the place, but my kids have been pestering me to go. Grumpily I agreed but only on the condition that I pick the town.

So, Bude. Didn't expect much, and the traffic jams into town made up of ex-builder van converted VW T5's didn't help. Noted fairly early on that parking may be an issue, so cheered myself up in finding a free spot right in town. And the cheerful attitude continued as Bude is actually quite nice. It's not the Cote D'Azure, sure, but it's an honest enough town for this area. In other words it only had a handful of ironic t-shirt shops, three or four surfing stores, and only a few clotted cream parlours. I like scones and tea, but arriving at distant towns only to find that's all there is can be a bit tedious. We settled initially by the sea pool, letting the children play in it. Noted that there were perhaps 200 surfers in the sea, all closely controlled by the life guard. Looks fun. The sea pool itself was a friendly enough spot, with great views.

Kids got hungry so we moved along to the next beach and the café. Fully expected to get stung, to share a £7 soggy pasty between the four of us. High prices, crappy food. No! Not at all. Low prices, good food - my fussy daughter actually ate a Cornish pasty, something she has never done before, and my wife slobbered over her burger. Well she did until she spotted that I'd upgraded mine to cheesy bacon. Turns out the café makes the pasties and win awards for them. 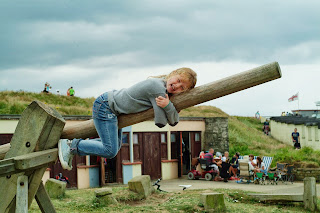 As you can see, my daughter was quite happy here - this is her after being dried off from swimming, and full of good quality food. Certainly not an image I'd have been able to capture after walking around somewhere tedious like Lands' End. There grumpy dad would have put the dampeners on everything. Really, all those years spent walking around towns chock full of fatties eating clotted cream teas 24/7, or the puke washed streets that form the internal towns or those that attract the weekend surfers, has gone in an instant. I'm still not struck on Cornwall and its "let's suck the tourist" Duchy mentality, but Bude is really quite nice in an innocent sort of way.