It's 32 degrees C, so I'll go for a long bike ride then. Reigate to Ashtead and back.

July 17, 2013
The UK is going through what we call a "heat wave" but what a lot of countries would refer to as a normal day. It's 32 degrees C, hot for us. So, it's hot, the trails are dry, time for a bike ride then. Where to? Well why not Bike Beans café in Ashtead? Second week running I've done this trip, and for you Dear Reader I've mapped it out. Indeed that's the only reason I went; to map the route out. It's not a bad little route; not exciting enough to be called classic, but if you fancy a change from the normal North Downs Way to Box Hill and back, then why not give it a go? I'm not mad keen on there-and-back type rides, so this one runs as a figure of eight loop. It could easily be extended to cover Tadworth or Box Hill / Ranmore, increasing the length to 30 miles or so. As can be seen the actual run into Ashtead is a bit of a dog leg, so in many ways you'd really have to want to get coffee specifically from Bike Beans to make it worth the effort. Hate to say it, but cutting out Ashtead and instead sliding over to Box Hill or even Dorking would be a much more interesting ride. Stane Street is chalky dryness and insanely fast if you use the walled berms at the end. I like the community spirit of Bike Beans, but at the end of the day their coffee is no better than the NT café and there's more seating at Box Hill. Not to mention the thrill of beasting your time up the hill. 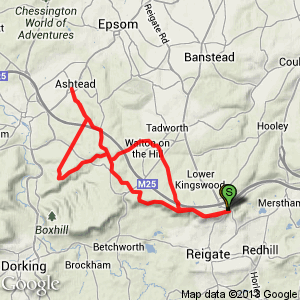 As said nothing exciting happened. It was a ride is all. Saw a few other mountain bikers out, and they were both well into their 70's which pleased me. One goes through phases in life, thinking "I'm almost 50 now, will I be able to do this in another five years?" and the answer obviously is yes. One guy was cracking on it must be said, all grey hair and wrinkles. Good on ya fella.

The only exciting thing being that the Hawthorn bushes are getting their annual trim, which meant the silly Racing Ralph on the rear got three punctures. As it is tubeless they self healed but not before all pressure was lost, so I spent faffage time pumping it back up. Brand new tyre on this morning, noticed it full of gashes from one ride out. Wonder how long it will last? Ideally I'd like a Rubber Queen Black Chili set, but at £100 it's not going to happen any time soon is it?

So, 24 miles done, two and a bit hours actual cycling time, average speed just over 10mph and I topped out coming down Reigate Hill at 32mph. And this shows how far suspension design, and tyre / braking performance has come on. Back in the day, on my bucking bronco Klein Mantra, 20mph was considered good. Indeed I can distinctly remember some guy trying to follow me and asking how it was I was able to go so fast. At the time it felt insane, but today at my maximum speed I was just coasting. Pedal a bit and 40mph is eminently possible down there if free of people and horses. 20mph is only possible now if you drag the brakes*.

Ah, one thing. The NT Warden has posted signs on the hill warning cyclists to slow down. Fair enough, but really he also needs to post signs asking the walkers not to be so frikkin stupid. I'm considerate as a rider, but today, on a road, some walker people took the piss. On a road they'd let their 4 year old get ahead. They watched me come towards them, but didn't say anything to their child. No warnings, nothing. In the end I was the one who called out to the boy, and yet they still said or did nothing with regards to this child's safety. So fair play asking cyclists to be considerate, but pedestrians could do themselves a favour now and then in engaging brain.

To end on a high note. Stane Street, the little jump near the Beaverbrook estate. I was going down at full flight, perhaps 30mph, seat post dropped, arse way back, head down. Spotted a walker, so went to slow down. He only stepped back and encouraged me to go as fast as possible, which I did, spitting gravel everywhere. That's class from a stranger. Thanks.

*Having written this I now remember that the descent down Reigate Hill was a different beast back then. It was a rooty mess, so I'm not comparing like with like. Indeed given that it is now essentially smooth, any bike, no matter what age, should be able to reach silly speeds. The only thing that would hold anybody back would be tyres - you need a bit of volume as it can be quite flinty.