From four to one and back to two again. Colley Hill BBQ. December 26th ride out.

December 27, 2012
December 26th is always the day for a post Christmas spin out. This year it was going to be different as we'd been offered the chance to have a BBQ up in the hills with one of the Top Gear production crew [who we'll call TG Guy] - seemed too good to miss. So when the shops were still open I bought some chicken thighs, made a chocolate chili and purchased a hip flask. Made up the chili, pre-cooked the chicken, filled the hip flask with brandy and all was set for four of us hardy cyclists to go out.

But then attrition set in. TK texted in to say he had family visiting, AD has a cold and TN had a puncture. So the field of four intrepid explorers was now down to a solo MG. No problem; more chicken, chili and brandy for me then! So I set off at 9am on the 26th all happy, a bit overloaded with food, but happy as at 12:00 hours I'd be on Colley Hill joining TG Guy in with a BBQ. Got to the top of Reigate Hill and I wasn't happy with my saddle; just in the wrong position; too high. As I was putting my tools away I glanced a look at my 'phone. My my, TN had sent a text to say he was on his way after all so now there were two intrepid explorers once more.

Now TN is very keen but generally rides solo, so is used to going at his own pace. I've no problems with this at all; happy to have somebody along for a spin so adjust my speed accordingly. Now essentially there wasn't an awful lot of difference in speed in reality, I only average 8mph most times, but I was surprised to see TN right behind me on every downhill, even popping in some cheeky jumps. He doesn't mess around when gravity takes a hold, this even though we did some nasty ones over on Headley. On the flat he was there as well, but the hills it is fair to say weren't his strong point. I'm not convinced he can't do them; indeed I'd say he could if he rode out with a few people now and then [open invite there my friend!]. A lot of what people can't do is in their heads, and Nick talked himself out of a lot of climbs before we even got there. We all do this, and I'm as guilty as anybody - I've talked myself out of doing manuals and jumps to the point now where I know the theory, can actually do them if I'm practising in the park, but out on the trail my wheels stay firmly on the ground at all times. 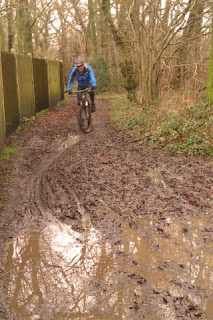 It is fair to say TN held his own today, fair play and on any other day would be right there in the mix. Unfortunately today was one of the harder rides out, it really was. The rain had had good chance to soak into the ground, so the mud was thick, freshly wetted and amazingly slippery. My front washed out well over 20 times, but luckily it was so slippery when it did slip sideways there was nothing to grip so I was able to catch it. Not by skill, just went with it. Had the tyre been able to find grip, I'd have been off as it snatched back. TN fell off just the once in some deep mire that I'd skirted around. The rain has also washed off the existing mud from just about everywhere, and I was surprised to see what lay underneath. For the main part our lovely "natural" singletrack is nothing more than either concrete or tarmac or hardcore. The only natural trails are over on Headley, and today they were gravel. Here I find it amusing that on the forums they say that to ride beaches you need a fat bike. But aren't the North Downs technically beaches? Just because the tide has gone out a bit.......

Yes Dear Reader it was an unfair ride. I'd been out in it the other day so knew what to expect mud wise, and how to get through the deeper bits. I took TN around some of the more dire climbs and downhills around here - the Pyramids over at Headley being one. He did it all, which is more than can be said for 99% of mountain bikers. We saw only three others out and about in over three hours. Very poor turnout from the cyclists I say. There were loads and loads of walkers.

Good on you TN for being in the 1% of people who were out! I really enjoyed the ride.

My custom chain lubricant also worked on the second outing. I'm not a fan of the heavy and sticky wet weather lubes, and have always liked the waxy, dry lubes. But they don't always work in the wet. What I'm doing now is applying a wax lubricant first, then once dry a C3 ceramic from Muc-off. Works for me but is right faff to apply. It's workable only for my current pattern of one or two rides a week, but if I was riding daily I'd have to have a re-think as it takes too long to apply. Ideally I'd like a petroleum based wax but I've not found any in the LBS.

And the BBQ? TG Guy was there and had set up. We pushed our food in place and stood around chatting, waiting for it to cook. As we did the wind picked up, carrying with it heavy moisture. By heck did it get cold! Funnily enough, a BBQ on top of Colley Hill, the middle of winter, seemed entirely normal. I guess as it was set up by somebody else and we just turned up, then it was no different to stopping at a cafe somewhere. It was a nice thing to have done, and I'm glad we joined in. We did have to substantially layer up though; it's all fine and dandy riding in a pertex shell with a t-shirt base layer, but in a minus 5 degrees C windchill such a combo hardly works. It got pretty cold around that BBQ.

Afterwards we went around to AD's house for beer and food. As you do we ended up in the "Man Cave" looking at bikes the way hormonal women look at babies. We probably "oooed" and "ahhhed" a bit more is all. Oh dear. His full susser is still looking good, but it was impossible to actually move at first. I tried pushing it, but it wouldn't go. Something had siezed somewhere. Rusty chain? Nope, looked fine. Bottom bracket? Nope that span up easily enough. Seems that the rear hub bearings have rusted out. Both of us could fix that, but both of us fessed up to not being arsed enough to be bothered to do it, so a trip to the LBS is in order. But really, this is a bike that's been used for two years, gets no maintenance or servicing other than a clean, but has not put a foot wrong in all that time. That's not bad is it? Get a good bike these days and they are hugely reliable.

Which brings me on to TN's bike. It's a £500 Cannondale that he's upgraded with new forks, hydraulic brakes and a new crank. I've a lot of time for these cheaper bikes; KD runs a £500 Kona no problems, and my Tassajara is a lovely machine. They do the job. True sometimes they only achieve reliability once you'd splashed a bit of cash, but KD has not touched his bike in three years - still on the original chain that he just douses in WD40 and lawnmower oil. You don't have to spend much to get out do you? I tried TN's bike and it's pretty good, especially the Ergon style grips he has. They look weird but they were really very comfortable. His front brake was dire mind.

Up on Reigate Hill there is a NT notice board and it had this intriguing poster: 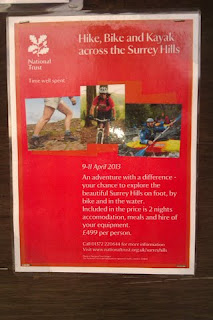