Riding the Surrey Hills in the hawfrost.

December 12, 2012
What a cracking ride that was. -3.7 degrees C when I set off, it warmed up to a sunny -1.5 deg C when I got back at around 11:00. My neighbour's were busy defrosting their cars when I set off, with one vehicle refusing to start; teach them to buy a diesel when their average journey is 0.3 miles and they do less than 2,000 miles per year. They could easily go full electric. The road was frosty, as was everything else, and my tyres made that lovely crunching noise. Up the hill, I was toasty, and hitting the first bit of off-road knew I'd done the right thing in sloping off for a mid-week ride. Why is it that 'naughty' things are so much fun? 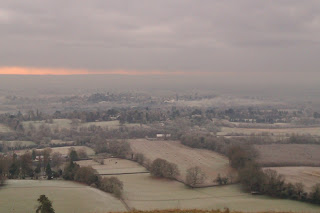 Apologies for the poor photograph of the Sussex Weald hawfrost.﻿

I didn't stray far, the usual 20 odd mile loop around Headley, a route you know well Dear Reader. Up on the top of the hills the views were stunning, what with everything being covered in thick hawfrost. I'd expected it to be cold up there but to me it seemed above freezing, and bits of the trail were defrosting back to mud. One chap I saw walking his dog on the hill had trouble keeping upright and kept sliding downwards. For the main the ground was partially frozen, enough to get good grip. On the dry bits it was frosty, so loads of grip, but the big muddy sections through the trees were a right pain. Crusty ice over thick mud. You'd hit an edge, think hey! this is solid, press on, only to suddenly drop a few inches into mire. It was great, real thigh bursting exercise in the cold. Ended up with my arse right over the back of the saddle bouncing up and down on it to get some traction. Must have looked very odd. Only stalled the once, on an ice covered log which resulted in a comedy "put my feet down only to find no ground" moment.

My tyres seemed happy today, which is odd seeing as how they are the despised Nobby Nic's. Why the magazines think badly of them I've no idea; they seem fine to me, as they should be for £90. A little slippy on wet slate, indeed very slippy on wet slate and I have a scar on my chin to prove, but then most tyres struggle on polished wet rock. For the Surrey Hills they seem an excellent choice. Light, grippy and easy to fit tubeless. I've been using them for ten months now no bother, even in the flint where I expected them to fail [please take a bow Maxxis Aspens!]. Mine look awful, and have quite a few knobblies missing having been to Snowdonia a few times, yet they work well enough. Black round things that work. Job done. I'd hate to think how much they'd cost now though. And I must have been mad - £90, on two bike tyres? I realise this is an old chestnut, economies of scale and all that, but the front two tyres on my Fiesta cost £85 fitted and balanced.

The V8 pedals I fitted some months back have given up after perhaps 400 miles. Bearings gone and I should strip them down, but Superstar are doing a better, lighter version for £40 so why bother? Spend an hour getting messy, then two hours trying to get the bearing tension right and failing miserably, with the pedals failing again within a month, or two minutes on Paypal? No brainer really.

Now as I was out early I left my lights on flash mode. Why turn them off? Bizarrely this was to my advantage all ride. Hacking down the path through the golf course I rounded a corner at some speed and there was only a 4x4 coming up the trail. Never seen that before. But because I had my lights on he moved pretty damn quickly out of the way and I sailed past through the narrowest of gaps. Had I not had my lights on it would have been nasty - it was that close, really was. I expect walkers and horse riders out and about, perhaps the odd cyclist even, but not a 4x4 vehicle roaring up a class piece of singletrack. Turns out the golf people are doing work clearing away the underbrush; let's hope they leave this lovely section alone.

Of course being cold my clothing was wrong in every sense. Shorts for a start. I'd worn base, mid and outer layers but this proved to be too much when hacking along, so I dropped one outer layer. Naturally I was too lazy to re-layer when heading home and I froze on the twelve minute descent, but this just added to the snotty fun. No idea what the weather was up to though; there was definite snow flakes up on the hills but coming down off them this must have turned to slight rain, which then froze in the air - my face felt as though somebody was sticking pins into my skin. Not pleasant but not quite the same as when I used to wear open faced lids on my Suzuki Bandit - ice at 60mph hurts.

The only negative of the day was getting ready. It was a snap decision to go out, so I'd nothing ready for a spin. All my tools were in different bags, and my clothing was all over the place. Now I normally use a bottle for my water, but today figured it'd freeze so why not get the Camelbak out? Took me some time to find as I've not used it for ages. Well Dear Reader have you ever seen the bladder on a Camelbak after it's been left full of water for a year? So that's a no to the bladder then. By now I'd forgotten why I'd got it out and was itching to cycle so off I went. Three miles later realised that I'd bought no food or water. Putting my bag away post ride I put it next to.... my tools. Looking in the bag I realised that it held nothing apart from the top I'd taken off mid ride. Sometimes I can be such a twat. Indeed why narrow that down; most times I can be a right twat.

It was fun going for a spin whilst everyone else was either going to, or was at, work. It's also fun to be hacking along in essentially a thick t-shirt whilst the walkers and car drivers are all bundled up against the elements. And the views really were special. Not Alpine special you understand, but for South London pretty substantial. Now, how exactly do I clean my bike when everything is frozen outside.... I know! Just leave it muddy.