July 19, 2012
Well yesterday I had two nice looking Schwalbe Racing Ralph mountain bike tyres delivered. Bit unsure as to their construction at less than 500g each - seem a bit lightweight to me, especially the sidewalls. But I've seen a few people using them, so they should be OK. Er I'm off to Snowdonia in four weeks....

Anyway, fitting them. WHAT UTTER BASTARDS! Tight as hell and all they want to do is sit in the middle of the rim in the spoke well. They do not want to seat into the rim at all. Obviously I gave up on tubeless as no way would they seat just using air pressure. After 90 minutes of using various methods of trying to get them to seat I gave up - just inflated them to 45psi and have left them overnight. Gits.

So, maintenance; why the title Muddy? Oh, confession time. When I came to move my bike the handlebars would not rotate. They were stuck in place. Bit of persuasion they did but in a graunchy, grumbly kind of way. So I stripped it all down to find my headsets full of sludgy sand, as was the headtube. How exactly did all that get in there? The lower bearing was a rusty mess. Managed to clean it all out but new bearings will be needed today. One suspects riding in the recent awful weather is to blame. Personally I think Holmbury as that area trashes bikes.

In reality that's not bad is it? This headset was fitted 30 months ago and has not been touched since. Weekly rides through the Surrey hills, two weeks on Snowdon, two months in the Belgium Ardennes. That's kind of hard on a bike, so for it to last this long is good. The bearings will only be $20 to replace in any case. OK I should have cleaned them out ages ago but life gets in the way.

The other thing amiss is my rear shifting - but again that is due to my rear shift cable having been fitted 30 months ago by self and not touched since. I hate swopping cables out, it's so tedious.

Which nicely brings me on to my Spannerfish t-shirt www.muddyground.com - we all now know that I cannot blame the miserable Spannerfish for my bike failings! It's all down to me and just being lazy. 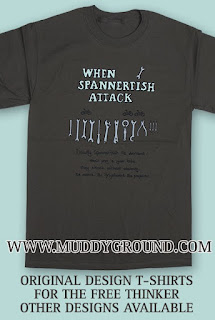