A good workman never blames his tools, but a cyclist will - and does!

July 18, 2012
On Sunday the trails were dire - really, really muddy. In advance I swopped my summer Maxxis Aspen tyres out for Bontrager Mud-X variants. These worked really well and I had a good ride.

When the trails dry out even slightly I find they squirm quite a bit in the faster corners and this is off-putting. OK it is a self limiter and slows me down, and isn't really a problem, but why have tyres fitted that do this? Why not have good tyres in the first place? Well weather and trail conditions for one! But I go from one extreme to the other and have never been happy with my overall choice. Mainly this is due to my being cheap - I fit a set of tyres then leave them on until they are totally shagged. I'm fairly ignorant like that. Yet today I've gone and spent £90 on a set of Schwalb tyres. Jeez, £90.

Why? Well on Telegraph the other day the 2.25" Aspens worked really well. Normally I've a pretty narow tyre on and any kind of gravity assisted moves are met with a following THUMP! as I touch down. Not nice. The Aspens though were lovely and cushoning... until the next bit of mud where I'd go all wibbly again. I also noted that other riders were zipping around on what looked like multi-condition tyres. Must be good thought I.

So I've gone for the happy medium; a tyre that does not excel in any one area but should be OK for most. The Mud-X isn't good in the dry, and the Aspen is dire in the mud. Hopefully for once this should allow the PACE RC303 to shine instead of being a bit crappy - entirely my fault I should add. The new Onza range appealed, but the front tyre seemed a bit soft at 55a compound for 2.25" width, and I didn't want to go down to the 2.0" alternative*. Can remember having a 55a Maxxis once - you could take silly liberties downhill and get away with everything, but at around 16 miles into XC rides my legs would just give up pushing the things around. Like riding with your brakes on. So the Onzas got the miss, pity. They look good otherwise.

Mind since writting this I've found out that Schwalbe UST tyres may be a bit of a bugger to fit. Oh how I love tubeless tech.....

But 90 bloomin' quid. Same old same old, but two tyres on my Fiesta were only £105, and that's fitted so better value by a mile. The Fiesta tyres should last for 40,000 miles against perhaps 2,000 for an MTB tyre. Makes no sense to me other than profit.

I've also got shot of that silly flappy mudguard that fits between fork crown and brace. OK it does stop stuff getting thrown into your face [instance being AD and dog eggs in general] but the way that the stanchion seals fill with crap galls. I've gone for a Mucky Nutz fender this time. I don't expect much to be honest - in 20 years I've yet to fit an MTB mudguard that actually guards against mud to any acceptable degree. Suspect it's an impossibility. Ah well, always optomistic on these things.

Since I've been fettling now is about time for a gratuitous shot of my Muddy Ground Spannerfish t-shirt ;¬) £14.95 folks - you know it makes sense. 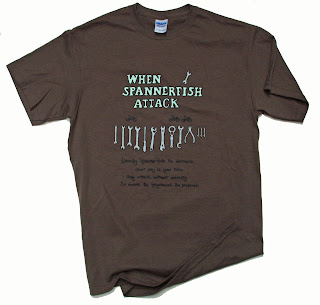