March 27, 2012
Fistly I have to admit to not really being into VW vehicles at all. I've never owned one, or indeed sat in a VW product surprisingly enough. But like an awful lot of people I quite like the idea of an original camper. There's something innocent about the image - although with the prices now being commanded there really is little innocence left; well into the commercial domain now. 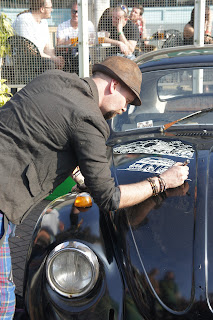 Now I've already admitted to not being a VW fan, so what was I doing at a VW show? Well this is London, it was a nice day, and well why not? Sandown is a lovely venue, it's easy to get to and if you never try anything you'll never know will you?

So off we tootled and paid £27 to get in. Must admit it was oddly exciting to be surrounded by classic VW transporters. I've no idea why this should be though! All pastel colours, rust and BBQ meat smells, and we could hear loud dance music being played all around us. Wondering around the event was interesting as gradually you get sucked into the happy enthusiasm of it all, and we ended up discussing whether to get a good T25 California or a new VW van conversion for £44,000. Really, we did and quite a few others did too. But to be honest it's all a bit "holiday pastel portrait" isn't it? You know the score - you're a bit drunk or heat soaked and see these guys doing wonderful family portraits by the harbour or market somewhere in the Med. For two weeks you seriously consider buying one, but never get around to it. Back at the airport you spot these portraits being carried home by people that did bother. Each and every one of them is shit. They all look the same and none of them look like the family they are supposed to. Somewhere in the back of your head a little voice goes "phew!"

To me although these T2 and T25 campers look utterly fantastic and I could really fall for one, I'm guessing the reality is that a few people do OK out of them but the majority just end up in heartache land. Even the good ones at the show were rusty somewhere or had paint chipped off in quite a few places. Most of the ones for sale boasted re-built this, or re-built that suggestive of serious and deep pocketed on-going maintenance.

And how small are they inside? You always seem to have to have an associated awning or tent like structure, which kind of defeats the purpose a little. The new one we looked at could sleep four yet even the salesman admitted that it could only do that if you removed every single item you'd brought with you from the interior of the vehicle first. And the cooking facilities looked basic in the extreme; just two little hobs. No grill or oven. I know a lot of people use these things, but it seems to me a good tent and kit could be had for £1,000 versus owning a £44,000 vehicle and a £1,000 tent! For me the maths of the event didn't add up, yet for some reason the appeal doesn't diminish at all. Heart over head wins every time and I came away understanding the poor rationale for owning one yet desperate to buy one anyway!

The show? Oh that! Well it was essentially a car park full of used VW Campers and Beetles, then when you went inside the quality and interest of the vehicles increased - clearly the majority were show vehicles that were not really used on the road. These ranged from the first VW / Porsche, some Tamaya dune bug copies, a dragster T2 pick-up to a whole range of customized T2 and Beetle cars. Pretty much all of these you would like to own, even the rat ones such was the quality of the workmanship. Then thee were the various trade stands, a swop meet upstairs and a rather nice kids play room. This we appreciated as it meant they stopped inside whilst we stopped outside watching the world go by. For a busy event it felt very homely and indeed chilled out, even though it plainly wasn't being a commercial exercise right from the entrance gate. It was actually a really nice day out and we stopped there until dusk really, which is a record for us at shows; we normally go, the kids blast us around in an hour, and we leave bemused.